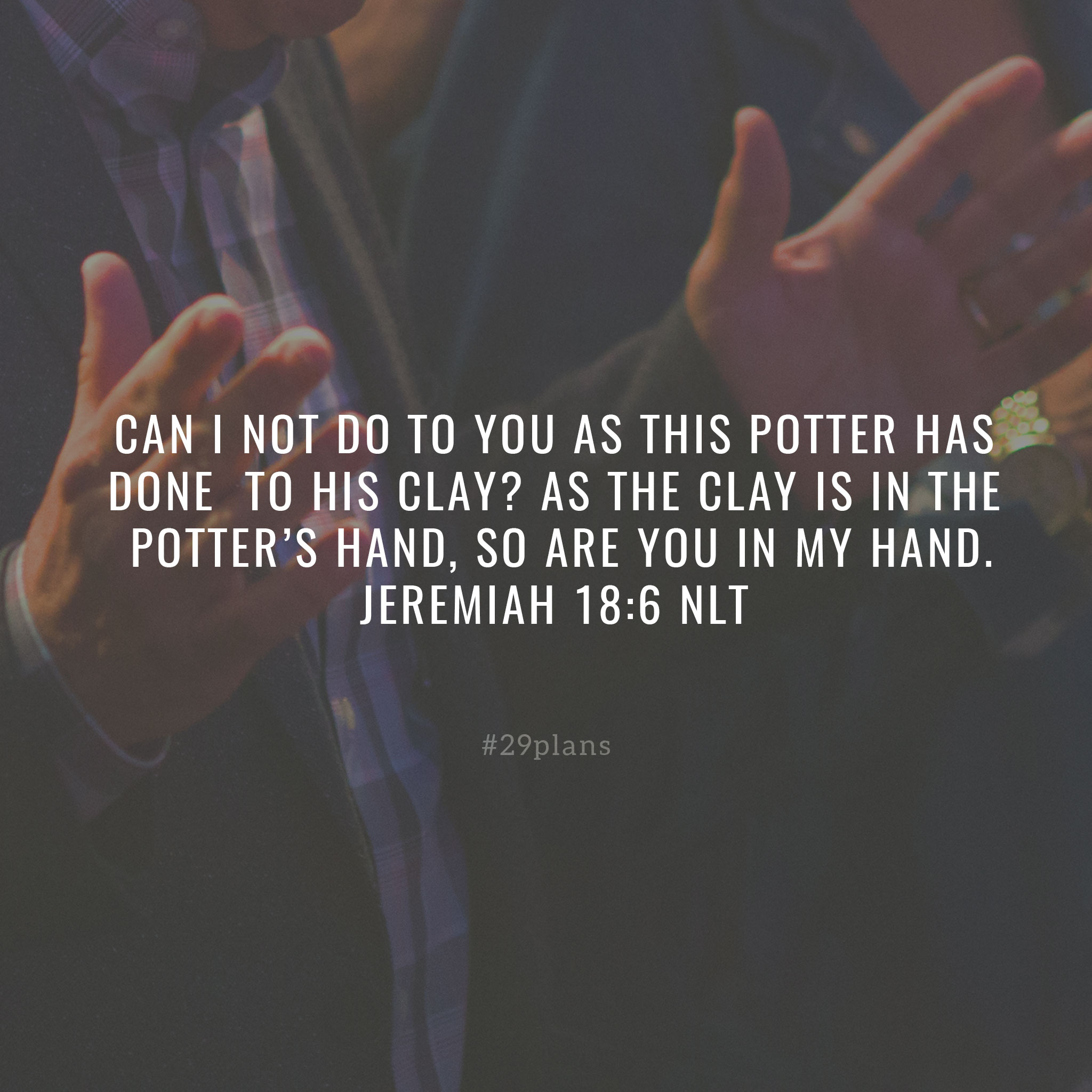 Guide: Read Jeremiah 18, 19; Listen to Hands of the Potter by @caedmonscall; Pray for the lost; Is your life in God’s hands?

Verse of the Day: Can I not do to you as this potter has done to his clay? As the clay is in the potter’s hand, so are you in my hand. Jeremiah 18:6 NLT

Song of the Day: Hands of the Potter by Caedmon’s Call — Youtube

The Potter and the Clay
1 The Lord gave another message to Jeremiah. He said, 2 “Go down to the potter’s shop, and I will speak to you there.” 3 So I did as he told me and found the potter working at his wheel. 4 But the jar he was making did not turn out as he had hoped, so he crushed it into a lump of clay again and started over.

5 Then the Lord gave me this message: 6 “O Israel, can I not do to you as this potter has done to his clay? As the clay is in the potter’s hand, so are you in my hand. 7 If I announce that a certain nation or kingdom is to be uprooted, torn down, and destroyed, 8 but then that nation renounces its evil ways, I will not destroy it as I had planned. 9 And if I announce that I will plant and build up a certain nation or kingdom, 10 but then that nation turns to evil and refuses to obey me, I will not bless it as I said I would.

11 “Therefore, Jeremiah, go and warn all Judah and Jerusalem. Say to them, ‘This is what the Lord says: I am planning disaster for you instead of good. So turn from your evil ways, each of you, and do what is right.’”

12 But the people replied, “Don’t waste your breath. We will continue to live as we want to, stubbornly following our own evil desires.”

“Has anyone ever heard of such a thing,
even among the pagan nations?
My virgin daughter Israel
has done something terrible!
14 Does the snow ever disappear from the mountaintops of Lebanon?
Do the cold streams flowing from those distant mountains ever run dry?
15 But my people are not so reliable, for they have deserted me;
they burn incense to worthless idols.
They have stumbled off the ancient highways
and walk in muddy paths.
16 Therefore, their land will become desolate,
a monument to their stupidity.
All who pass by will be astonished
and will shake their heads in amazement.
17 I will scatter my people before their enemies
as the east wind scatters dust.
And in all their trouble I will turn my back on them
and refuse to notice their distress.”
A Plot against Jeremiah
18 Then the people said, “Come on, let’s plot a way to stop Jeremiah. We have plenty of priests and wise men and prophets. We don’t need him to teach the word and give us advice and prophecies. Let’s spread rumors about him and ignore what he says.”

19 Lord, hear me and help me!
Listen to what my enemies are saying.
20 Should they repay evil for good?
They have dug a pit to kill me,
though I pleaded for them
and tried to protect them from your anger.
21 So let their children starve!
Let them die by the sword!
Let their wives become childless widows.
Let their old men die in a plague,
and let their young men be killed in battle!
22 Let screaming be heard from their homes
as warriors come suddenly upon them.
For they have dug a pit for me
and have hidden traps along my path.
23 Lord, you know all about their murderous plots against me.
Don’t forgive their crimes and blot out their sins.
Let them die before you.
Deal with them in your anger.

Jeremiah’s Shattered Jar
1 This is what the Lord said to me: “Go and buy a clay jar. Then ask some of the leaders of the people and of the priests to follow you. 2 Go out through the Gate of Broken Pots to the garbage dump in the valley of Ben-Hinnom, and give them this message. 3 Say to them, ‘Listen to this message from the Lord, you kings of Judah and citizens of Jerusalem! This is what the Lord of Heaven’s Armies, the God of Israel, says: I will bring a terrible disaster on this place, and the ears of those who hear about it will ring!

4 “‘For Israel has forsaken me and turned this valley into a place of wickedness. The people burn incense to foreign gods—idols never before acknowledged by this generation, by their ancestors, or by the kings of Judah. And they have filled this place with the blood of innocent children. 5 They have built pagan shrines to Baal, and there they burn their sons as sacrifices to Baal. I have never commanded such a horrible deed; it never even crossed my mind to command such a thing! 6 So beware, for the time is coming, says the Lord, when this garbage dump will no longer be called Topheth or the valley of Ben-Hinnom, but the Valley of Slaughter.

7 “‘For I will upset the careful plans of Judah and Jerusalem. I will allow the people to be slaughtered by invading armies, and I will leave their dead bodies as food for the vultures and wild animals. 8 I will reduce Jerusalem to ruins, making it a monument to their stupidity. All who pass by will be astonished and will gasp at the destruction they see there. 9 I will see to it that your enemies lay siege to the city until all the food is gone. Then those trapped inside will eat their own sons and daughters and friends. They will be driven to utter despair.’

10 “As these men watch you, Jeremiah, smash the jar you brought. 11 Then say to them, ‘This is what the Lord of Heaven’s Armies says: As this jar lies shattered, so I will shatter the people of Judah and Jerusalem beyond all hope of repair. They will bury the bodies here in Topheth, the garbage dump, until there is no more room for them. 12 This is what I will do to this place and its people, says the Lord. I will cause this city to become defiled like Topheth. 13 Yes, all the houses in Jerusalem, including the palace of Judah’s kings, will become like Topheth—all the houses where you burned incense on the rooftops to your star gods, and where liquid offerings were poured out to your idols.’”

14 Then Jeremiah returned from Topheth, the garbage dump where he had delivered this message, and he stopped in front of the Temple of the Lord. He said to the people there, 15 “This is what the Lord of Heaven’s Armies, the God of Israel, says: ‘I will bring disaster upon this city and its surrounding towns as I promised, because you have stubbornly refused to listen to me.’”