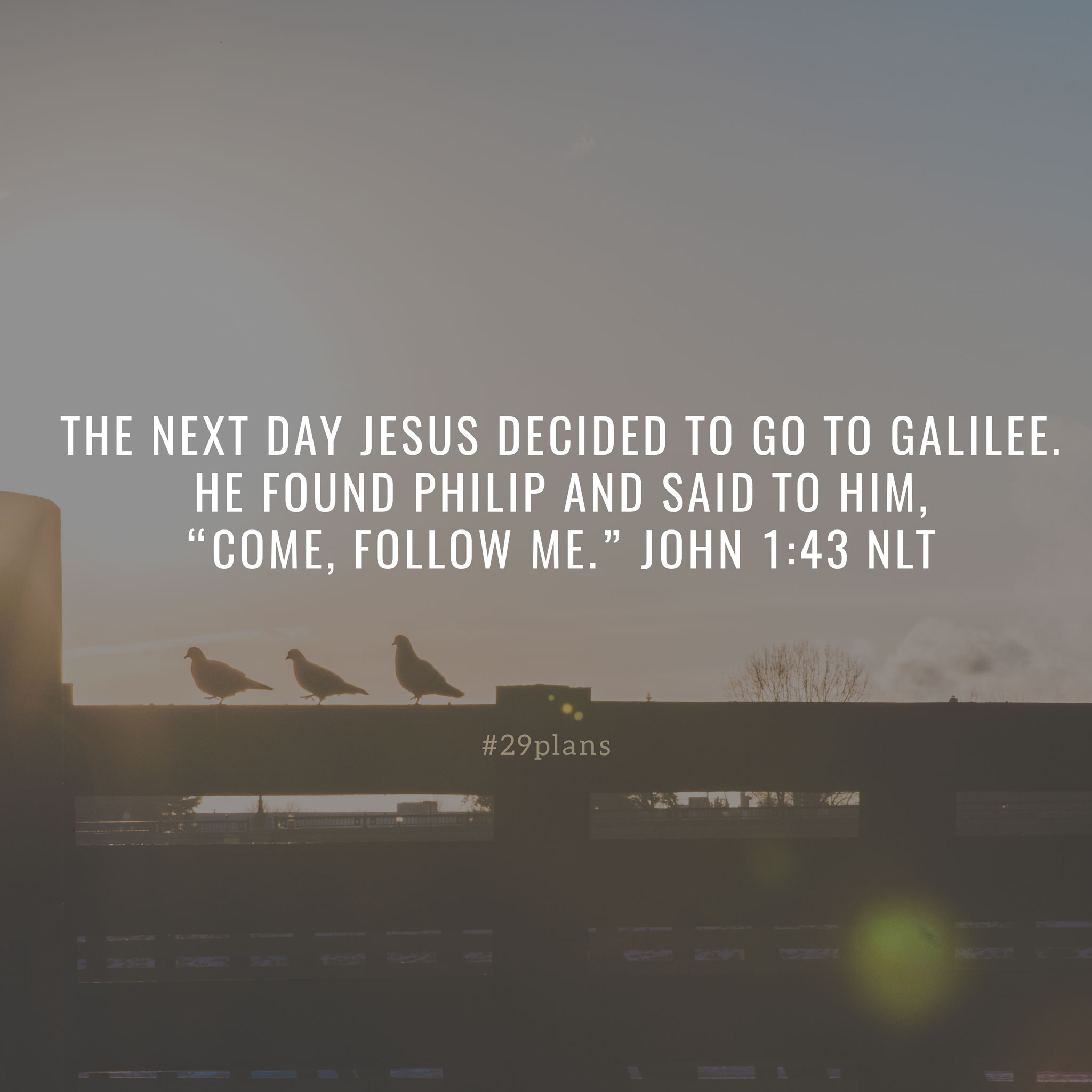 Verse of the Day: The next day Jesus decided to go to Galilee. He found Philip and said to him, “Come, follow me.” John 1:43 NLT

Song of the Day: I Have Decided by Elevation Worship — Spotify — Youtube

The Man and Woman Sin
1 The serpent was the shrewdest of all the wild animals the Lord God had made. One day he asked the woman, “Did God really say you must not eat the fruit from any of the trees in the garden?”

4 “You won’t die!” the serpent replied to the woman. 5 “God knows that your eyes will be opened as soon as you eat it, and you will be like God, knowing both good and evil.”

6 The woman was convinced. She saw that the tree was beautiful and its fruit looked delicious, and she wanted the wisdom it would give her. So she took some of the fruit and ate it. Then she gave some to her husband, who was with her, and he ate it, too. 7 At that moment their eyes were opened, and they suddenly felt shame at their nakedness. So they sewed fig leaves together to cover themselves.

8 When the cool evening breezes were blowing, the man[a] and his wife heard the Lord God walking about in the garden. So they hid from the Lord God among the trees. 9 Then the Lord God called to the man, “Where are you?”

10 He replied, “I heard you walking in the garden, so I hid. I was afraid because I was naked.”

11 “Who told you that you were naked?” the Lord God asked. “Have you eaten from the tree whose fruit I commanded you not to eat?”

12 The man replied, “It was the woman you gave me who gave me the fruit, and I ate it.”

13 Then the Lord God asked the woman, “What have you done?”

“The serpent deceived me,” she replied. “That’s why I ate it.”

14 Then the Lord God said to the serpent, “Because you have done this, you are cursed more than all animals, domestic and wild. You will crawl on your belly, groveling in the dust as long as you live.

15 And I will cause hostility between you and the woman, and between your offspring and her offspring. He will strike[b] your head, and you will strike his heel.”
16 Then he said to the woman, “I will sharpen the pain of your pregnancy, and in pain you will give birth. And you will desire to control your husband, but he will rule over you.[c]”

17 And to the man he said, “Since you listened to your wife and ate from the tree whose fruit I commanded you not to eat, the ground is cursed because of you. All your life you will struggle to scratch a living from it.

18 It will grow thorns and thistles for you, though you will eat of its grains. 19 By the sweat of your brow will you have food to eat until you return to the ground from which you were made. For you were made from dust, and to dust you will return.”

20 Then the man—Adam—named his wife Eve, because she would be the mother of all who live.[d] 21 And the Lord God made clothing from animal skins for Adam and his wife.

22 Then the Lord God said, “Look, the human beings[e] have become like us, knowing both good and evil. What if they reach out, take fruit from the tree of life, and eat it? Then they will live forever!” 23 So the Lord God banished them from the Garden of Eden, and he sent Adam out to cultivate the ground from which he had been made. 24 After sending them out, the Lord God stationed mighty cherubim to the east of the Garden of Eden. And he placed a flaming sword that flashed back and forth to guard the way to the tree of life.
–
Footnotes:

35 The following day John was again standing with two of his disciples. 36 As Jesus walked by, John looked at him and declared, “Look! There is the Lamb of God!” 37 When John’s two disciples heard this, they followed Jesus.

38 Jesus looked around and saw them following. “What do you want?” he asked them.

They replied, “Rabbi” (which means “Teacher”), “where are you staying?”

39 “Come and see,” he said. It was about four o’clock in the afternoon when they went with him to the place where he was staying, and they remained with him the rest of the day.

40 Andrew, Simon Peter’s brother, was one of these men who heard what John said and then followed Jesus. 41 Andrew went to find his brother, Simon, and told him, “We have found the Messiah” (which means “Christ”[a]).

42 Then Andrew brought Simon to meet Jesus. Looking intently at Simon, Jesus said, “Your name is Simon, son of John—but you will be called Cephas” (which means “Peter”[b]).

43 The next day Jesus decided to go to Galilee. He found Philip and said to him, “Come, follow me.” 44 Philip was from Bethsaida, Andrew and Peter’s hometown.

45 Philip went to look for Nathanael and told him, “We have found the very person Moses[c] and the prophets wrote about! His name is Jesus, the son of Joseph from Nazareth.”

46 “Nazareth!” exclaimed Nathanael. “Can anything good come from Nazareth?”

“Come and see for yourself,” Philip replied.

47 As they approached, Jesus said, “Now here is a genuine son of Israel—a man of complete integrity.”

48 “How do you know about me?” Nathanael asked.

Jesus replied, “I could see you under the fig tree before Philip found you.”

49 Then Nathanael exclaimed, “Rabbi, you are the Son of God—the King of Israel!”

50 Jesus asked him, “Do you believe this just because I told you I had seen you under the fig tree? You will see greater things than this.” 51 Then he said, “I tell you the truth, you will all see heaven open and the angels of God going up and down on the Son of Man, the one who is the stairway between heaven and earth.[d]”
–
Footnotes: