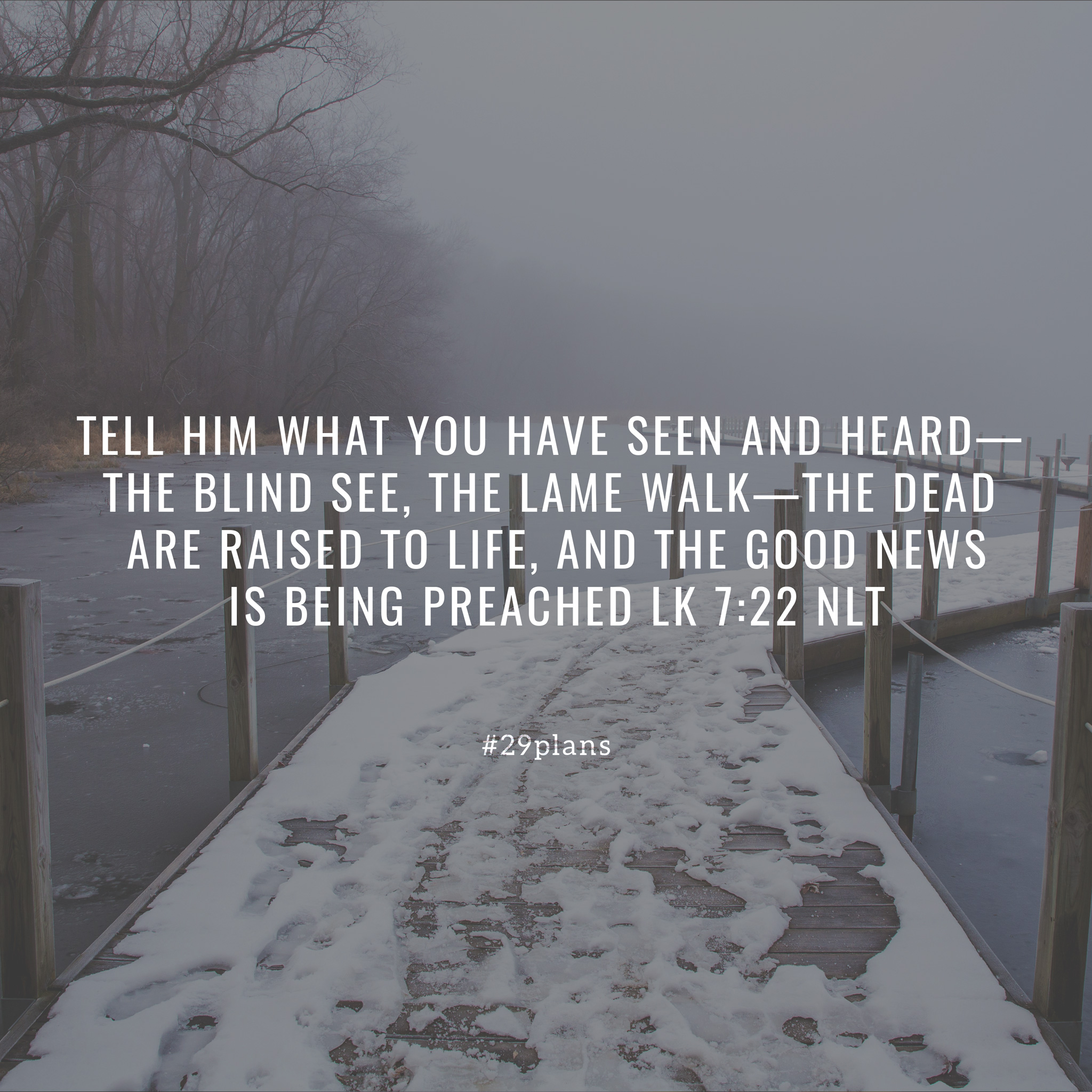 Verse of the Day: Then he told John’s disciples, “Go back to John and tell him what you have seen and heard—the blind see, the lame walk, the lepers are cured, the deaf hear, the dead are raised to life, and the Good News is being preached to the poor. Lk 7:22 NLT

Song of the Day: The Lost are Found by Hillsong Worship — Youtube

1 At last Job spoke, and he cursed the day of his birth. 2 He said:

3 “Let the day of my birth be erased,
and the night I was conceived.
4 Let that day be turned to darkness.
Let it be lost even to God on high,
and let no light shine on it.
5 Let the darkness and utter gloom claim that day for its own.
Let a black cloud overshadow it,
and let the darkness terrify it.
6 Let that night be blotted off the calendar,
never again to be counted among the days of the year,
never again to appear among the months.
7 Let that night be childless.
Let it have no joy.
8 Let those who are experts at cursing—
whose cursing could rouse Leviathan[a]—
curse that day.
9 Let its morning stars remain dark.
Let it hope for light, but in vain;
may it never see the morning light.
10 Curse that day for failing to shut my mother’s womb,
for letting me be born to see all this trouble.
–
Footnotes:

The Faith of a Roman Officer

1 When Jesus had finished saying all this to the people, he returned to Capernaum. 2 At that time the highly valued slave of a Roman officer[a] was sick and near death. 3 When the officer heard about Jesus, he sent some respected Jewish elders to ask him to come and heal his slave. 4 So they earnestly begged Jesus to help the man. “If anyone deserves your help, he does,” they said, 5 “for he loves the Jewish people and even built a synagogue for us.”

6 So Jesus went with them. But just before they arrived at the house, the officer sent some friends to say, “Lord, don’t trouble yourself by coming to my home, for I am not worthy of such an honor. 7 I am not even worthy to come and meet you. Just say the word from where you are, and my servant will be healed. 8 I know this because I am under the authority of my superior officers, and I have authority over my soldiers. I only need to say, ‘Go,’ and they go, or ‘Come,’ and they come. And if I say to my slaves, ‘Do this,’ they do it.”

9 When Jesus heard this, he was amazed. Turning to the crowd that was following him, he said, “I tell you, I haven’t seen faith like this in all Israel!” 10 And when the officer’s friends returned to his house, they found the slave completely healed.

11 Soon afterward Jesus went with his disciples to the village of Nain, and a large crowd followed him. 12 A funeral procession was coming out as he approached the village gate. The young man who had died was a widow’s only son, and a large crowd from the village was with her. 13 When the Lord saw her, his heart overflowed with compassion. “Don’t cry!” he said. 14 Then he walked over to the coffin and touched it, and the bearers stopped. “Young man,” he said, “I tell you, get up.” 15 Then the dead boy sat up and began to talk! And Jesus gave him back to his mother.

16 Great fear swept the crowd, and they praised God, saying, “A mighty prophet has risen among us,” and “God has visited his people today.” 17 And the news about Jesus spread throughout Judea and the surrounding countryside.

Jesus and John the Baptist

18 The disciples of John the Baptist told John about everything Jesus was doing. So John called for two of his disciples, 19 and he sent them to the Lord to ask him, “Are you the Messiah we’ve been expecting,[b] or should we keep looking for someone else?”

20 John’s two disciples found Jesus and said to him, “John the Baptist sent us to ask, ‘Are you the Messiah we’ve been expecting, or should we keep looking for someone else?’”

21 At that very time, Jesus cured many people of their diseases, illnesses, and evil spirits, and he restored sight to many who were blind. 22 Then he told John’s disciples, “Go back to John and tell him what you have seen and heard—the blind see, the lame walk, the lepers are cured, the deaf hear, the dead are raised to life, and the Good News is being preached to the poor. 23 And tell him, ‘God blesses those who do not turn away because of me.[c]’”

24 After John’s disciples left, Jesus began talking about him to the crowds. “What kind of man did you go into the wilderness to see? Was he a weak reed, swayed by every breath of wind? 25 Or were you expecting to see a man dressed in expensive clothes? No, people who wear beautiful clothes and live in luxury are found in palaces. 26 Were you looking for a prophet? Yes, and he is more than a prophet. 27 John is the man to whom the Scriptures refer when they say,

‘Look, I am sending my messenger ahead of you,
and he will prepare your way before you.’[d] 28 I tell you, of all who have ever lived, none is greater than John. Yet even the least person in the Kingdom of God is greater than he is!”

29 When they heard this, all the people—even the tax collectors—agreed that God’s way was right,[e] for they had been baptized by John. 30 But the Pharisees and experts in religious law rejected God’s plan for them, for they had refused John’s baptism.

31 “To what can I compare the people of this generation?” Jesus asked. “How can I describe them? 32 They are like children playing a game in the public square. They complain to their friends,

‘We played wedding songs,
and you didn’t dance,
so we played funeral songs,
and you didn’t weep.’
33 For John the Baptist didn’t spend his time eating bread or drinking wine, and you say, ‘He’s possessed by a demon.’ 34 The Son of Man,[f] on the other hand, feasts and drinks, and you say, ‘He’s a glutton and a drunkard, and a friend of tax collectors and other sinners!’ 35 But wisdom is shown to be right by the lives of those who follow it.[g]”
–
Footnotes: