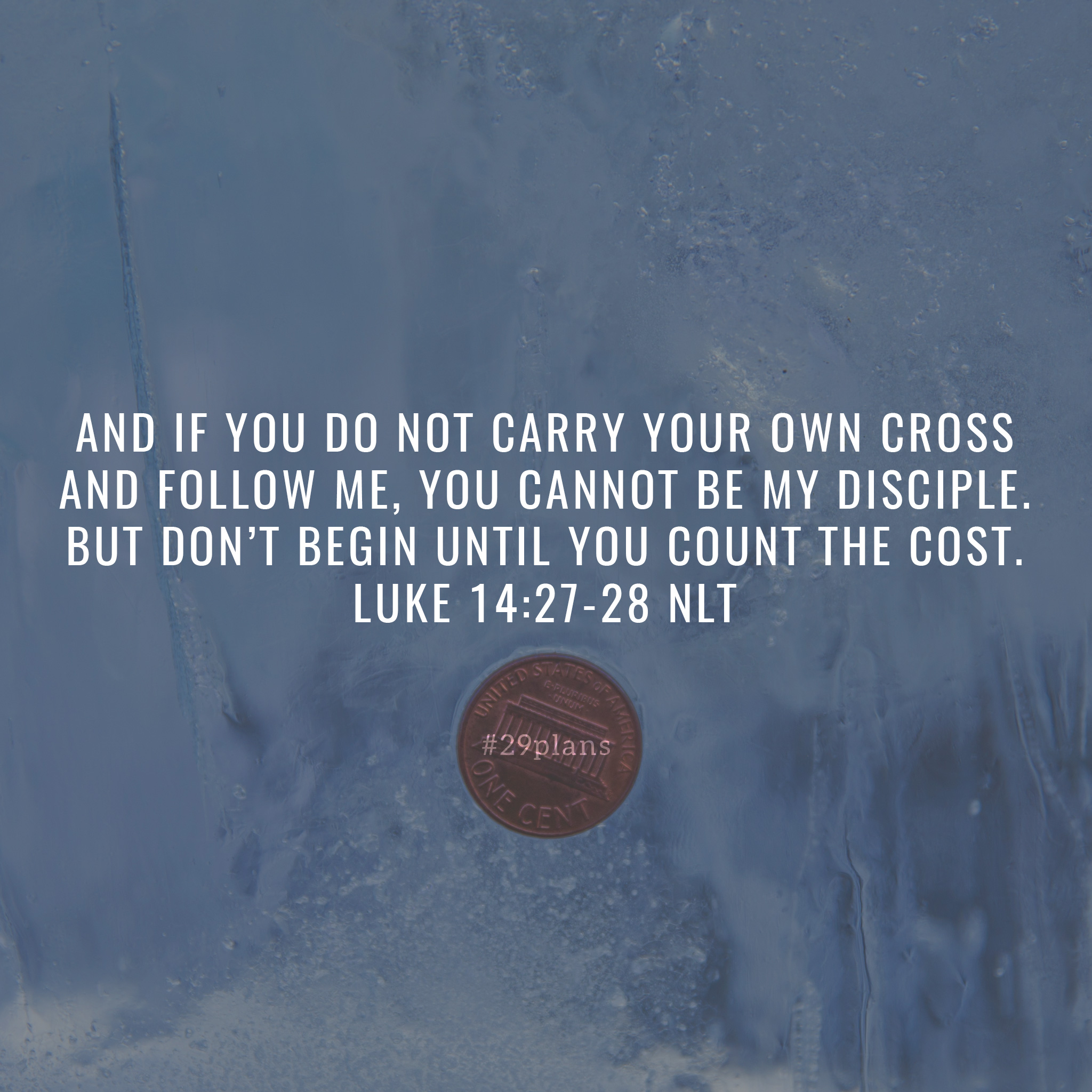 Verse of the Day: And if you do not carry your own cross and follow me, you cannot be my disciple. But don’t begin until you count the cost Luke 14:27-28 NLT

Song of the Day: Count the Cost by Jordan Tyler Poole — Youtube

1 Two full years later, Pharaoh dreamed that he was standing on the bank of the Nile River. 2 In his dream he saw seven fat, healthy cows come up out of the river and begin grazing in the marsh grass. 3 Then he saw seven more cows come up behind them from the Nile, but these were scrawny and thin. These cows stood beside the fat cows on the riverbank. 4 Then the scrawny, thin cows ate the seven healthy, fat cows! At this point in the dream, Pharaoh woke up.

5 But he fell asleep again and had a second dream. This time he saw seven heads of grain, plump and beautiful, growing on a single stalk. 6 Then seven more heads of grain appeared, but these were shriveled and withered by the east wind. 7 And these thin heads swallowed up the seven plump, well-formed heads! Then Pharaoh woke up again and realized it was a dream.

8 The next morning Pharaoh was very disturbed by the dreams. So he called for all the magicians and wise men of Egypt. When Pharaoh told them his dreams, not one of them could tell him what they meant.

9 Finally, the king’s chief cup-bearer spoke up. “Today I have been reminded of my failure,” he told Pharaoh. 10 “Some time ago, you were angry with the chief baker and me, and you imprisoned us in the palace of the captain of the guard. 11 One night the chief baker and I each had a dream, and each dream had its own meaning. 12 There was a young Hebrew man with us in the prison who was a slave of the captain of the guard. We told him our dreams, and he told us what each of our dreams meant. 13 And everything happened just as he had predicted. I was restored to my position as cup-bearer, and the chief baker was executed and impaled on a pole.”

22 Jesus went through the towns and villages, teaching as he went, always pressing on toward Jerusalem. 23 Someone asked him, “Lord, will only a few be saved?”

He replied, 24 “Work hard to enter the narrow door to God’s Kingdom, for many will try to enter but will fail. 25 When the master of the house has locked the door, it will be too late. You will stand outside knocking and pleading, ‘Lord, open the door for us!’ But he will reply, ‘I don’t know you or where you come from.’ 26 Then you will say, ‘But we ate and drank with you, and you taught in our streets.’ 27 And he will reply, ‘I tell you, I don’t know you or where you come from. Get away from me, all you who do evil.’

28 “There will be weeping and gnashing of teeth, for you will see Abraham, Isaac, Jacob, and all the prophets in the Kingdom of God, but you will be thrown out. 29 And people will come from all over the world—from east and west, north and south—to take their places in the Kingdom of God. 30 And note this: Some who seem least important now will be the greatest then, and some who are the greatest now will be least important then.[a]”

31 At that time some Pharisees said to him, “Get away from here if you want to live! Herod Antipas wants to kill you!”

32 Jesus replied, “Go tell that fox that I will keep on casting out demons and healing people today and tomorrow; and the third day I will accomplish my purpose. 33 Yes, today, tomorrow, and the next day I must proceed on my way. For it wouldn’t do for a prophet of God to be killed except in Jerusalem!

34 “O Jerusalem, Jerusalem, the city that kills the prophets and stones God’s messengers! How often I have wanted to gather your children together as a hen protects her chicks beneath her wings, but you wouldn’t let me. 35 And now, look, your house is abandoned. And you will never see me again until you say, ‘Blessings on the one who comes in the name of the Lord!’[b]”

Jesus Heals on the Sabbath

1 One Sabbath day Jesus went to eat dinner in the home of a leader of the Pharisees, and the people were watching him closely. 2 There was a man there whose arms and legs were swollen.[c] 3 Jesus asked the Pharisees and experts in religious law, “Is it permitted in the law to heal people on the Sabbath day, or not?” 4 When they refused to answer, Jesus touched the sick man and healed him and sent him away. 5 Then he turned to them and said, “Which of you doesn’t work on the Sabbath? If your son[d] or your cow falls into a pit, don’t you rush to get him out?” 6 Again they could not answer.

7 When Jesus noticed that all who had come to the dinner were trying to sit in the seats of honor near the head of the table, he gave them this advice: 8 “When you are invited to a wedding feast, don’t sit in the seat of honor. What if someone who is more distinguished than you has also been invited? 9 The host will come and say, ‘Give this person your seat.’ Then you will be embarrassed, and you will have to take whatever seat is left at the foot of the table!

10 “Instead, take the lowest place at the foot of the table. Then when your host sees you, he will come and say, ‘Friend, we have a better place for you!’ Then you will be honored in front of all the other guests. 11 For those who exalt themselves will be humbled, and those who humble themselves will be exalted.”

12 Then he turned to his host. “When you put on a luncheon or a banquet,” he said, “don’t invite your friends, brothers, relatives, and rich neighbors. For they will invite you back, and that will be your only reward. 13 Instead, invite the poor, the crippled, the lame, and the blind. 14 Then at the resurrection of the righteous, God will reward you for inviting those who could not repay you.”

Parable of the Great Feast

15 Hearing this, a man sitting at the table with Jesus exclaimed, “What a blessing it will be to attend a banquet[e] in the Kingdom of God!”

16 Jesus replied with this story: “A man prepared a great feast and sent out many invitations. 17 When the banquet was ready, he sent his servant to tell the guests, ‘Come, the banquet is ready.’ 18 But they all began making excuses. One said, ‘I have just bought a field and must inspect it. Please excuse me.’ 19 Another said, ‘I have just bought five pairs of oxen, and I want to try them out. Please excuse me.’ 20 Another said, ‘I now have a wife, so I can’t come.’

21 “The servant returned and told his master what they had said. His master was furious and said, ‘Go quickly into the streets and alleys of the town and invite the poor, the crippled, the blind, and the lame.’ 22 After the servant had done this, he reported, ‘There is still room for more.’ 23 So his master said, ‘Go out into the country lanes and behind the hedges and urge anyone you find to come, so that the house will be full. 24 For none of those I first invited will get even the smallest taste of my banquet.’”

The Cost of Being a Disciple

28 “But don’t begin until you count the cost. For who would begin construction of a building without first calculating the cost to see if there is enough money to finish it? 29 Otherwise, you might complete only the foundation before running out of money, and then everyone would laugh at you. 30 They would say, ‘There’s the person who started that building and couldn’t afford to finish it!’

31 “Or what king would go to war against another king without first sitting down with his counselors to discuss whether his army of 10,000 could defeat the 20,000 soldiers marching against him? 32 And if he can’t, he will send a delegation to discuss terms of peace while the enemy is still far away. 33 So you cannot become my disciple without giving up everything you own.

34 “Salt is good for seasoning. But if it loses its flavor, how do you make it salty again? 35 Flavorless salt is good neither for the soil nor for the manure pile. It is thrown away. Anyone with ears to hear should listen and understand!”
–
Footnotes: