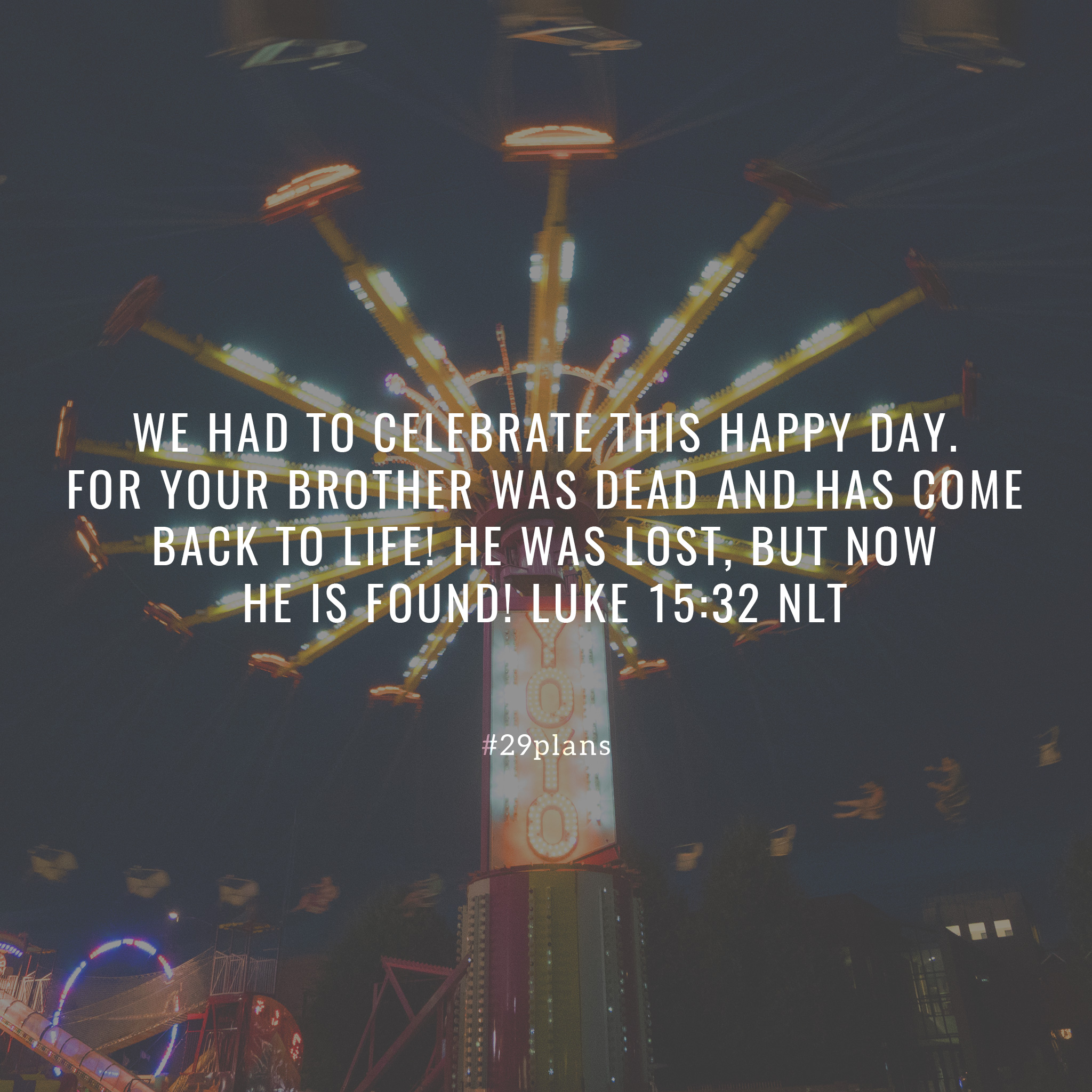 Guide: Read Genesis 41:37-57; Luke 15; Listen to Prodigal Son by @TyeTribbett; Pray for fathers and sons; Remember what it was like when you found Christ
Verse of the Day: We had to celebrate this happy day. For your brother was dead and has come back to life! He was lost, but now he is found! Luke 15:32 NLT

Song of the Day: Prodigal Son by Tye Tribbett — Youtube

Joseph Made Ruler of Egypt

37 Joseph’s suggestions were well received by Pharaoh and his officials. 38 So Pharaoh asked his officials, “Can we find anyone else like this man so obviously filled with the spirit of God?” 39 Then Pharaoh said to Joseph, “Since God has revealed the meaning of the dreams to you, clearly no one else is as intelligent or wise as you are. 40 You will be in charge of my court, and all my people will take orders from you. Only I, sitting on my throne, will have a rank higher than yours.”

41 Pharaoh said to Joseph, “I hereby put you in charge of the entire land of Egypt.” 42 Then Pharaoh removed his signet ring from his hand and placed it on Joseph’s finger. He dressed him in fine linen clothing and hung a gold chain around his neck. 43 Then he had Joseph ride in the chariot reserved for his second-in-command. And wherever Joseph went, the command was shouted, “Kneel down!” So Pharaoh put Joseph in charge of all Egypt. 44 And Pharaoh said to him, “I am Pharaoh, but no one will lift a hand or foot in the entire land of Egypt without your approval.”

45 Then Pharaoh gave Joseph a new Egyptian name, Zaphenath-paneah.[a] He also gave him a wife, whose name was Asenath. She was the daughter of Potiphera, the priest of On.[b] So Joseph took charge of the entire land of Egypt. 46 He was thirty years old when he began serving in the court of Pharaoh, the king of Egypt. And when Joseph left Pharaoh’s presence, he inspected the entire land of Egypt.

47 As predicted, for seven years the land produced bumper crops. 48 During those years, Joseph gathered all the crops grown in Egypt and stored the grain from the surrounding fields in the cities. 49 He piled up huge amounts of grain like sand on the seashore. Finally, he stopped keeping records because there was too much to measure.

50 During this time, before the first of the famine years, two sons were born to Joseph and his wife, Asenath, the daughter of Potiphera, the priest of On. 51 Joseph named his older son Manasseh,[c] for he said, “God has made me forget all my troubles and everyone in my father’s family.” 52 Joseph named his second son Ephraim,[d] for he said, “God has made me fruitful in this land of my grief.”

Parable of the Lost Sheep

1 Tax collectors and other notorious sinners often came to listen to Jesus teach. 2 This made the Pharisees and teachers of religious law complain that he was associating with such sinful people—even eating with them!

3 So Jesus told them this story: 4 “If a man has a hundred sheep and one of them gets lost, what will he do? Won’t he leave the ninety-nine others in the wilderness and go to search for the one that is lost until he finds it? 5 And when he has found it, he will joyfully carry it home on his shoulders. 6 When he arrives, he will call together his friends and neighbors, saying, ‘Rejoice with me because I have found my lost sheep.’ 7 In the same way, there is more joy in heaven over one lost sinner who repents and returns to God than over ninety-nine others who are righteous and haven’t strayed away!

Parable of the Lost Coin

8 “Or suppose a woman has ten silver coins[a] and loses one. Won’t she light a lamp and sweep the entire house and search carefully until she finds it? 9 And when she finds it, she will call in her friends and neighbors and say, ‘Rejoice with me because I have found my lost coin.’ 10 In the same way, there is joy in the presence of God’s angels when even one sinner repents.”

Parable of the Lost Son

11 To illustrate the point further, Jesus told them this story: “A man had two sons. 12 The younger son told his father, ‘I want my share of your estate now before you die.’ So his father agreed to divide his wealth between his sons.

13 “A few days later this younger son packed all his belongings and moved to a distant land, and there he wasted all his money in wild living. 14 About the time his money ran out, a great famine swept over the land, and he began to starve. 15 He persuaded a local farmer to hire him, and the man sent him into his fields to feed the pigs. 16 The young man became so hungry that even the pods he was feeding the pigs looked good to him. But no one gave him anything.

17 “When he finally came to his senses, he said to himself, ‘At home even the hired servants have food enough to spare, and here I am dying of hunger! 18 I will go home to my father and say, “Father, I have sinned against both heaven and you, 19 and I am no longer worthy of being called your son. Please take me on as a hired servant.”’

20 “So he returned home to his father. And while he was still a long way off, his father saw him coming. Filled with love and compassion, he ran to his son, embraced him, and kissed him. 21 His son said to him, ‘Father, I have sinned against both heaven and you, and I am no longer worthy of being called your son.[b]’

22 “But his father said to the servants, ‘Quick! Bring the finest robe in the house and put it on him. Get a ring for his finger and sandals for his feet. 23 And kill the calf we have been fattening. We must celebrate with a feast, 24 for this son of mine was dead and has now returned to life. He was lost, but now he is found.’ So the party began.

25 “Meanwhile, the older son was in the fields working. When he returned home, he heard music and dancing in the house, 26 and he asked one of the servants what was going on. 27 ‘Your brother is back,’ he was told, ‘and your father has killed the fattened calf. We are celebrating because of his safe return.’

28 “The older brother was angry and wouldn’t go in. His father came out and begged him, 29 but he replied, ‘All these years I’ve slaved for you and never once refused to do a single thing you told me to. And in all that time you never gave me even one young goat for a feast with my friends. 30 Yet when this son of yours comes back after squandering your money on prostitutes, you celebrate by killing the fattened calf!’

31 “His father said to him, ‘Look, dear son, you have always stayed by me, and everything I have is yours. 32 We had to celebrate this happy day. For your brother was dead and has come back to life! He was lost, but now he is found!’”
–
Footnotes: