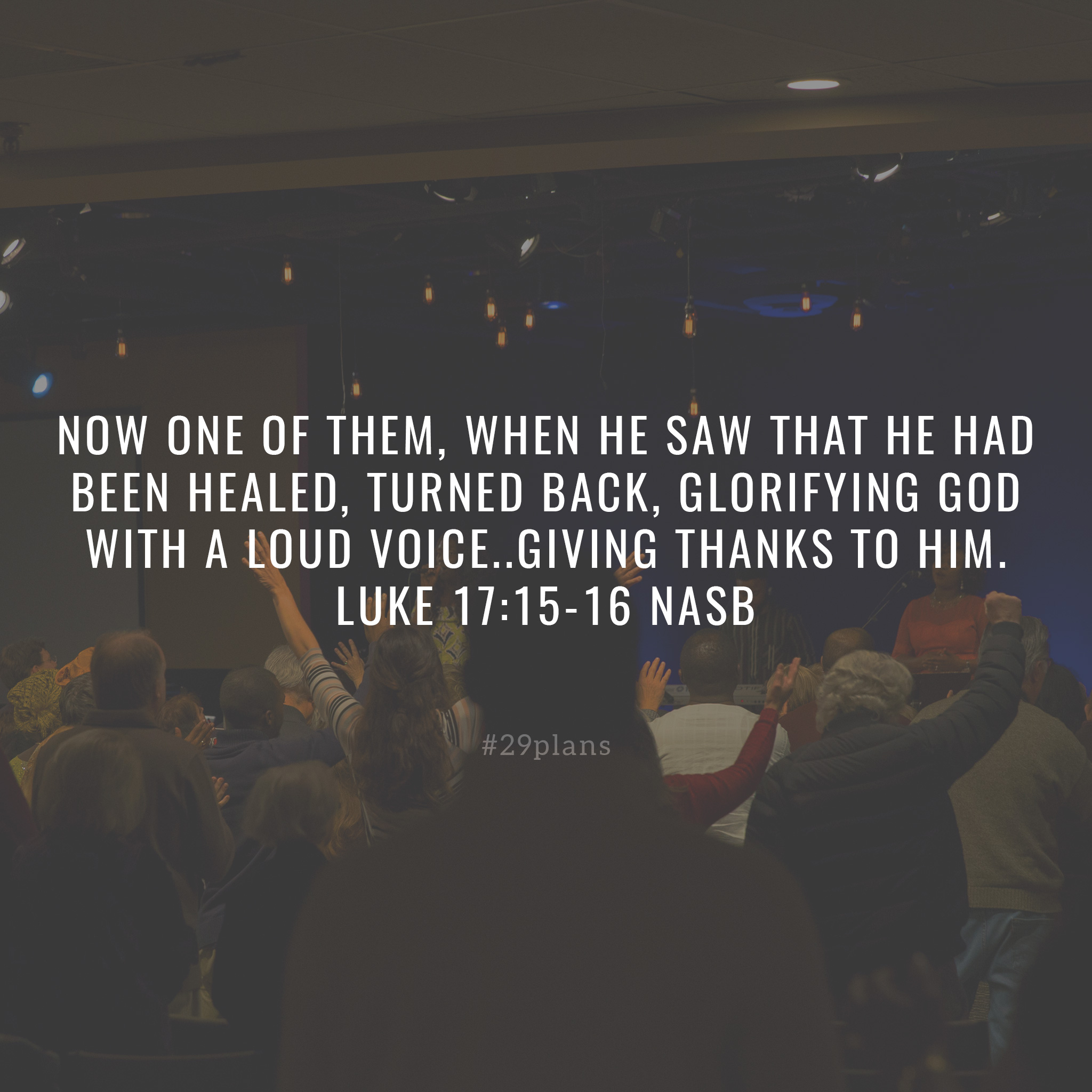 Verse of the Day: Now one of them, when he saw that he had been healed, turned back, glorifying God with a loud voice..giving thanks to Him Luke 17:15-16 NASB

Song of the Day: Thank You by Hillsong Live — Youtube

The Return to Egypt

1 Now the famine was severe in the land. 2 So it came about when they had finished eating the grain which they had brought from Egypt, that their father said to them, “Go back, buy us a little food.” 3 Judah spoke to him, however, saying, “The man solemnly warned [a]us, ‘You shall not see my face unless your brother is with you.’ 4 If you send our brother with us, we will go down and buy you food. 5 But if you do not send him, we will not go down; for the man said to us, ‘You will not see my face unless your brother is with you.’” 6 Then Israel said, “Why did you treat me so badly [b]by telling the man whether you still had another brother?” 7 But they said, “The man questioned particularly about us and our relatives, saying, ‘Is your father still alive? Have you another brother?’ So we [c]answered his questions. Could we possibly know that he would say, ‘Bring your brother down’?” 8 Judah said to his father Israel, “Send the lad with me and we will arise and go, that we may live and not die, we as well as you and our little ones. 9 I myself will be surety for him; [d]you may hold me responsible for him. If I do not bring him back to you and set him before you, then [e]let me bear the blame before you forever. 10 For if we had not delayed, surely by now we could have returned twice.”

11 Then their father Israel said to them, “If it must be so, then do this: take some of the best products of the land in your [f]bags, and carry down to the man as a present, a little [g]balm and a little honey, [h]aromatic gum and [i]myrrh, pistachio nuts and almonds. 12 Take double the money in your hand, and take back in your hand the money that was returned in the mouth of your sacks; perhaps it was a mistake. 13 Take your brother also, and arise, return to the man; 14 and may [j]God Almighty grant you compassion in the sight of the man, so that he will release to you your other brother and Benjamin. And as for me, if I am bereaved of my children, I am bereaved.” 15 So the men took this present, and they took double the money in their hand, and Benjamin; then they arose and went down to Egypt and stood before Joseph.

16 When Joseph saw Benjamin with them, he said to his house steward, “Bring the men into the house, and slay an animal and make ready; for the men are to dine with me at noon.” 17 So the man did as Joseph said, and [k]brought the men to Joseph’s house. 18 Now the men were afraid, because they were brought to Joseph’s house; and they said, “It is because of the money that was returned in our sacks the first time that we are being brought in, that he may [l]seek occasion against us and fall upon us, and take us for slaves with our donkeys.”
–
Footnotes:

11 While He was on the way to Jerusalem, He was passing [a]between Samaria and Galilee. 12 As He entered a village, ten leprous men who stood at a distance met Him; 13 and they raised their voices, saying, “Jesus, Master, have mercy on us!” 14 When He saw them, He said to them, “Go and show yourselves to the priests.” And as they were going, they were cleansed. 15 Now one of them, when he saw that he had been healed, turned back, glorifying God with a loud voice, 16 and he fell on his face at His feet, giving thanks to Him. And he was a Samaritan. 17 Then Jesus answered and said, “Were there not ten cleansed? But the nine—where are they? 18 [b]Was no one found who returned to give glory to God, except this foreigner?” 19 And He said to him, “Stand up and go; your faith [c]has made you well.”

22 And He said to the disciples, “The days will come when you will long to see one of the days of the Son of Man, and you will not see it. 23 They will say to you, ‘Look there! Look here!’ Do not go away, and do not run after them. 24 For just like the lightning, when it flashes out of one part [f]of the sky, shines to the other part [g]of the sky, so will the Son of Man be in His day. 25 But first He must suffer many things and be rejected by this generation. 26 And just as it happened in the days of Noah, so it will be also in the days of the Son of Man: 27 they were eating, they were drinking, they were marrying, they were being given in marriage, until the day that Noah entered the ark, and the flood came and destroyed them all. 28 [h]It was the same as happened in the days of Lot: they were eating, they were drinking, they were buying, they were selling, they were planting, they were building; 29 but on the day that Lot went out from Sodom it rained fire and [i]brimstone from heaven and destroyed them all. 30 It will be [j]just the same on the day that the Son of Man is revealed. 31 On that day, the one who is on the housetop and whose goods are in the house must not go down to take them out; and likewise the one who is in the field must not turn back. 32 Remember Lot’s wife. 33 Whoever seeks to keep his [k]life will lose it, and whoever loses his life will preserve it. 34 I tell you, on that night there will be two in one bed; one will be taken and the other will be left. 35 There will be two women grinding at the same place; one will be taken and the other will be left. 36 [[l]Two men will be in the field; one will be taken and the other will be left.”] 37 And answering they *said to Him, “Where, Lord?” And He said to them, “Where the body is, there also the [m]vultures will be gathered.”

1 Now He was telling them a parable to show that at all times they ought to pray and not to lose heart, 2 saying, “In a certain city there was a judge who did not fear God and did not respect man. 3 There was a widow in that city, and she kept coming to him, saying, ‘[n]Give me legal protection from my opponent.’ 4 For a while he was unwilling; but afterward he said to himself, ‘Even though I do not fear God nor respect man, 5 yet because this widow bothers me, I will [o]give her legal protection, otherwise by continually coming she will [p]wear me out.’” 6 And the Lord said, “Hear what the unrighteous judge *said; 7 now, will not God bring about justice for His elect who cry to Him day and night, [q]and will He delay long over them? 8 I tell you that He will bring about justice for them quickly. However, when the Son of Man comes, will He find [r]faith on the earth?”

The Pharisee and the Publican

9 And He also told this parable to some people who trusted in themselves that they were righteous, and viewed others with contempt: 10 “Two men went up into the temple to pray, one a Pharisee and the other a tax collector. 11 The Pharisee stood and was praying this to himself: ‘God, I thank You that I am not like other people: swindlers, unjust, adulterers, or even like this tax collector. 12 I fast twice a week; I pay tithes of all that I get.’ 13 But the tax collector, standing some distance away, was even unwilling to lift up his eyes to heaven, but was beating his breast, saying, ‘God, be [s]merciful to me, the sinner!’ 14 I tell you, this man went to his house justified rather than the other; for everyone who exalts himself will be humbled, but he who humbles himself will be exalted.”
–
Footnotes: