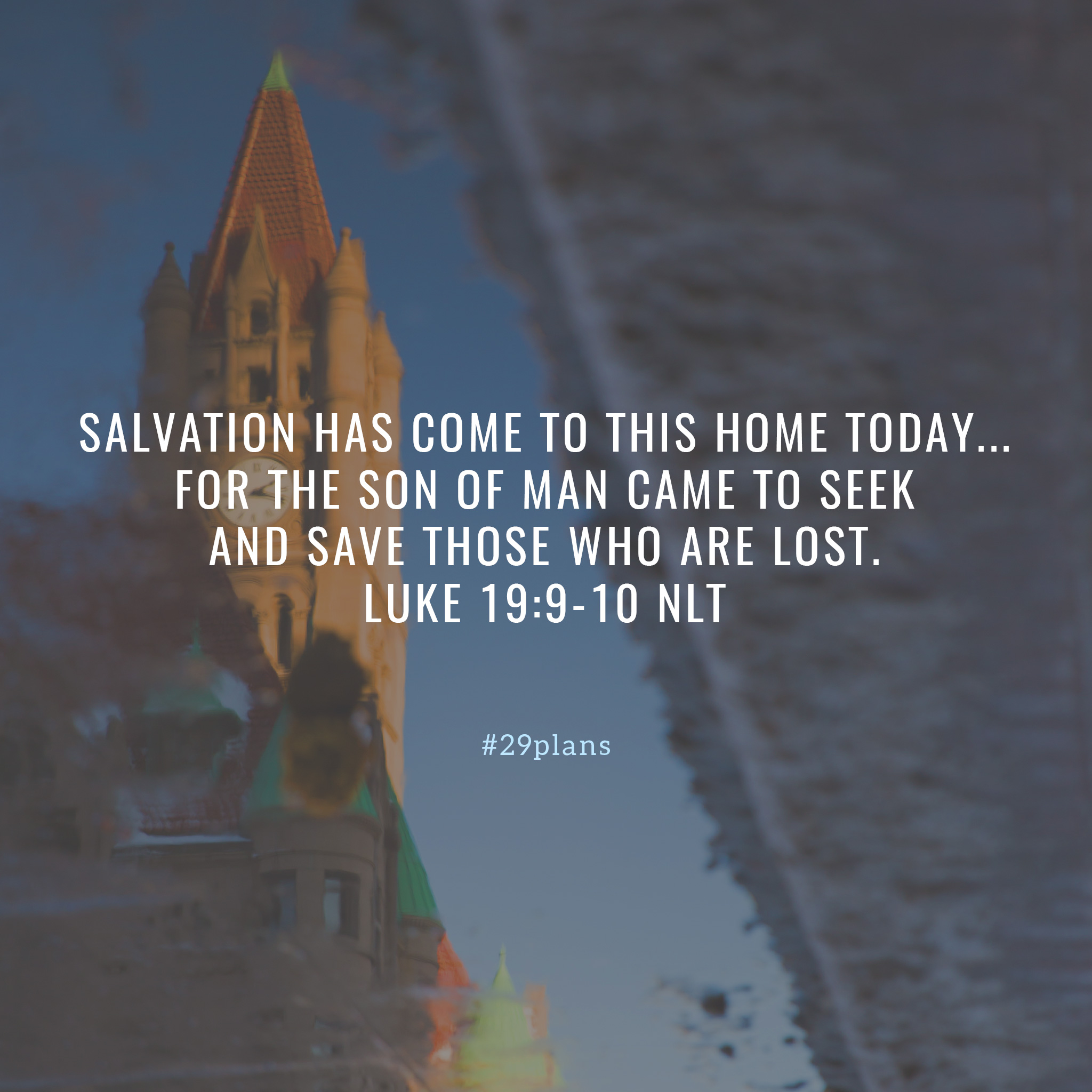 Verse of the Day: Salvation has come to this home today… For the Son of Man came to seek and save those who are lost. Luke 19:9-10 NLT

Song of the Day: Salvation is Here by Lincoln Brewster — Youtube

16 The news soon reached Pharaoh’s palace: “Joseph’s brothers have arrived!” Pharaoh and his officials were all delighted to hear this.

17 Pharaoh said to Joseph, “Tell your brothers, ‘This is what you must do: Load your pack animals, and hurry back to the land of Canaan. 18 Then get your father and all of your families, and return here to me. I will give you the very best land in Egypt, and you will eat from the best that the land produces.’”

19 Then Pharaoh said to Joseph, “Tell your brothers, ‘Take wagons from the land of Egypt to carry your little children and your wives, and bring your father here. 20 Don’t worry about your personal belongings, for the best of all the land of Egypt is yours.’”

21 So the sons of Jacob[a] did as they were told. Joseph provided them with wagons, as Pharaoh had commanded, and he gave them supplies for the journey. 22 And he gave each of them new clothes—but to Benjamin he gave five changes of clothes and 300 pieces[b] of silver. 23 He also sent his father ten male donkeys loaded with the finest products of Egypt, and ten female donkeys loaded with grain and bread and other supplies he would need on his journey.

24 So Joseph sent his brothers off, and as they left, he called after them, “Don’t quarrel about all this along the way!” 25 And they left Egypt and returned to their father, Jacob, in the land of Canaan.

26 “Joseph is still alive!” they told him. “And he is governor of all the land of Egypt!” Jacob was stunned at the news—he couldn’t believe it. 27 But when they repeated to Jacob everything Joseph had told them, and when he saw the wagons Joseph had sent to carry him, their father’s spirits revived.

28 Then Jacob exclaimed, “It must be true! My son Joseph is alive! I must go and see him before I die.”
–
Footnotes:

1 Jesus entered Jericho and made his way through the town. 2 There was a man there named Zacchaeus. He was the chief tax collector in the region, and he had become very rich. 3 He tried to get a look at Jesus, but he was too short to see over the crowd. 4 So he ran ahead and climbed a sycamore-fig tree beside the road, for Jesus was going to pass that way.

5 When Jesus came by, he looked up at Zacchaeus and called him by name. “Zacchaeus!” he said. “Quick, come down! I must be a guest in your home today.”

6 Zacchaeus quickly climbed down and took Jesus to his house in great excitement and joy. 7 But the people were displeased. “He has gone to be the guest of a notorious sinner,” they grumbled.

8 Meanwhile, Zacchaeus stood before the Lord and said, “I will give half my wealth to the poor, Lord, and if I have cheated people on their taxes, I will give them back four times as much!”

9 Jesus responded, “Salvation has come to this home today, for this man has shown himself to be a true son of Abraham. 10 For the Son of Man[a] came to seek and save those who are lost.”

Parable of the Ten Servants

11 The crowd was listening to everything Jesus said. And because he was nearing Jerusalem, he told them a story to correct the impression that the Kingdom of God would begin right away. 12 He said, “A nobleman was called away to a distant empire to be crowned king and then return. 13 Before he left, he called together ten of his servants and divided among them ten pounds of silver,[b] saying, ‘Invest this for me while I am gone.’ 14 But his people hated him and sent a delegation after him to say, ‘We do not want him to be our king.’

15 “After he was crowned king, he returned and called in the servants to whom he had given the money. He wanted to find out what their profits were. 16 The first servant reported, ‘Master, I invested your money and made ten times the original amount!’

17 “‘Well done!’ the king exclaimed. ‘You are a good servant. You have been faithful with the little I entrusted to you, so you will be governor of ten cities as your reward.’

18 “The next servant reported, ‘Master, I invested your money and made five times the original amount.’

20 “But the third servant brought back only the original amount of money and said, ‘Master, I hid your money and kept it safe. 21 I was afraid because you are a hard man to deal with, taking what isn’t yours and harvesting crops you didn’t plant.’

22 “‘You wicked servant!’ the king roared. ‘Your own words condemn you. If you knew that I’m a hard man who takes what isn’t mine and harvests crops I didn’t plant, 23 why didn’t you deposit my money in the bank? At least I could have gotten some interest on it.’

24 “Then, turning to the others standing nearby, the king ordered, ‘Take the money from this servant, and give it to the one who has ten pounds.’

26 “‘Yes,’ the king replied, ‘and to those who use well what they are given, even more will be given. But from those who do nothing, even what little they have will be taken away. 27 And as for these enemies of mine who didn’t want me to be their king—bring them in and execute them right here in front of me.’”
–
Footnotes: