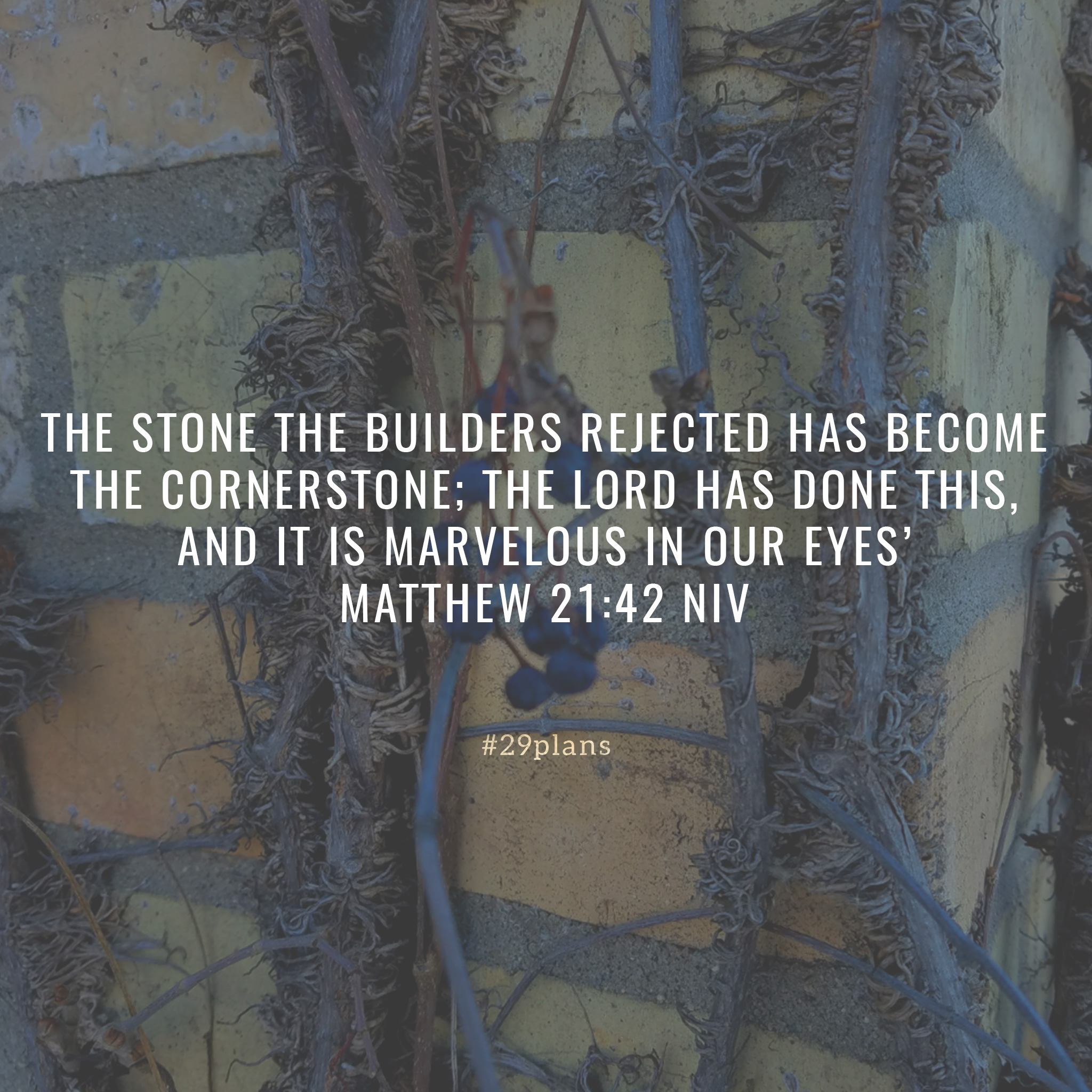 Guide: Read Genesis 50:1-13; Matthew 21:12-46 Listen to Cornerstone by @hillsonglive; Pray for something seemingly impossible; What doubts do u face?

Verse of the Day: The stone the builders rejected has become the cornerstone; the Lord has done this, and it is marvelous in our eyes’ Matt 21:42 NIV

Song of the Day: Cornerstone by Hillsong Live — Youtube

50 Joseph threw himself on his father and wept over him and kissed him. 2 Then Joseph directed the physicians in his service to embalm his father Israel. So the physicians embalmed him, 3 taking a full forty days, for that was the time required for embalming. And the Egyptians mourned for him seventy days.

4 When the days of mourning had passed, Joseph said to Pharaoh’s court, “If I have found favor in your eyes, speak to Pharaoh for me. Tell him, 5 ‘My father made me swear an oath and said, “I am about to die; bury me in the tomb I dug for myself in the land of Canaan.” Now let me go up and bury my father; then I will return.’”

6 Pharaoh said, “Go up and bury your father, as he made you swear to do.”

7 So Joseph went up to bury his father. All Pharaoh’s officials accompanied him—the dignitaries of his court and all the dignitaries of Egypt— 8 besides all the members of Joseph’s household and his brothers and those belonging to his father’s household. Only their children and their flocks and herds were left in Goshen. 9 Chariots and horsemen[a] also went up with him. It was a very large company.

10 When they reached the threshing floor of Atad, near the Jordan, they lamented loudly and bitterly; and there Joseph observed a seven-day period of mourning for his father. 11 When the Canaanites who lived there saw the mourning at the threshing floor of Atad, they said, “The Egyptians are holding a solemn ceremony of mourning.” That is why that place near the Jordan is called Abel Mizraim.[b]

12 So Jacob’s sons did as he had commanded them: 13 They carried him to the land of Canaan and buried him in the cave in the field of Machpelah, near Mamre, which Abraham had bought along with the field as a burial place from Ephron the Hittite.
–
Footnotes:

Jesus at the Temple

12 Jesus entered the temple courts and drove out all who were buying and selling there. He overturned the tables of the money changers and the benches of those selling doves. 13 “It is written,” he said to them, “‘My house will be called a house of prayer,’[a] but you are making it ‘a den of robbers.’[b]”

14 The blind and the lame came to him at the temple, and he healed them. 15 But when the chief priests and the teachers of the law saw the wonderful things he did and the children shouting in the temple courts, “Hosanna to the Son of David,” they were indignant.

16 “Do you hear what these children are saying?” they asked him.

“‘From the lips of children and infants
you, Lord, have called forth your praise’[c]?”
17 And he left them and went out of the city to Bethany, where he spent the night.

18 Early in the morning, as Jesus was on his way back to the city, he was hungry. 19 Seeing a fig tree by the road, he went up to it but found nothing on it except leaves. Then he said to it, “May you never bear fruit again!” Immediately the tree withered.

20 When the disciples saw this, they were amazed. “How did the fig tree wither so quickly?” they asked.

21 Jesus replied, “Truly I tell you, if you have faith and do not doubt, not only can you do what was done to the fig tree, but also you can say to this mountain, ‘Go, throw yourself into the sea,’ and it will be done. 22 If you believe, you will receive whatever you ask for in prayer.”

The Authority of Jesus Questioned

23 Jesus entered the temple courts, and, while he was teaching, the chief priests and the elders of the people came to him. “By what authority are you doing these things?” they asked. “And who gave you this authority?”

24 Jesus replied, “I will also ask you one question. If you answer me, I will tell you by what authority I am doing these things. 25 John’s baptism—where did it come from? Was it from heaven, or of human origin?”

They discussed it among themselves and said, “If we say, ‘From heaven,’ he will ask, ‘Then why didn’t you believe him?’ 26 But if we say, ‘Of human origin’—we are afraid of the people, for they all hold that John was a prophet.”

Then he said, “Neither will I tell you by what authority I am doing these things.

The Parable of the Two Sons

28 “What do you think? There was a man who had two sons. He went to the first and said, ‘Son, go and work today in the vineyard.’

29 “‘I will not,’ he answered, but later he changed his mind and went.

30 “Then the father went to the other son and said the same thing. He answered, ‘I will, sir,’ but he did not go.

31 “Which of the two did what his father wanted?”

“The first,” they answered.

The Parable of the Tenants

33 “Listen to another parable: There was a landowner who planted a vineyard. He put a wall around it, dug a winepress in it and built a watchtower. Then he rented the vineyard to some farmers and moved to another place. 34 When the harvest time approached, he sent his servants to the tenants to collect his fruit.

35 “The tenants seized his servants; they beat one, killed another, and stoned a third. 36 Then he sent other servants to them, more than the first time, and the tenants treated them the same way. 37 Last of all, he sent his son to them. ‘They will respect my son,’ he said.

38 “But when the tenants saw the son, they said to each other, ‘This is the heir. Come, let’s kill him and take his inheritance.’ 39 So they took him and threw him out of the vineyard and killed him.

40 “Therefore, when the owner of the vineyard comes, what will he do to those tenants?”

41 “He will bring those wretches to a wretched end,” they replied, “and he will rent the vineyard to other tenants, who will give him his share of the crop at harvest time.”

42 Jesus said to them, “Have you never read in the Scriptures:

“‘The stone the builders rejected
has become the cornerstone;
the Lord has done this,
and it is marvelous in our eyes’[d]?
43 “Therefore I tell you that the kingdom of God will be taken away from you and given to a people who will produce its fruit. 44 Anyone who falls on this stone will be broken to pieces; anyone on whom it falls will be crushed.”[e]

45 When the chief priests and the Pharisees heard Jesus’ parables, they knew he was talking about them. 46 They looked for a way to arrest him, but they were afraid of the crowd because the people held that he was a prophet.
–
Footnotes: