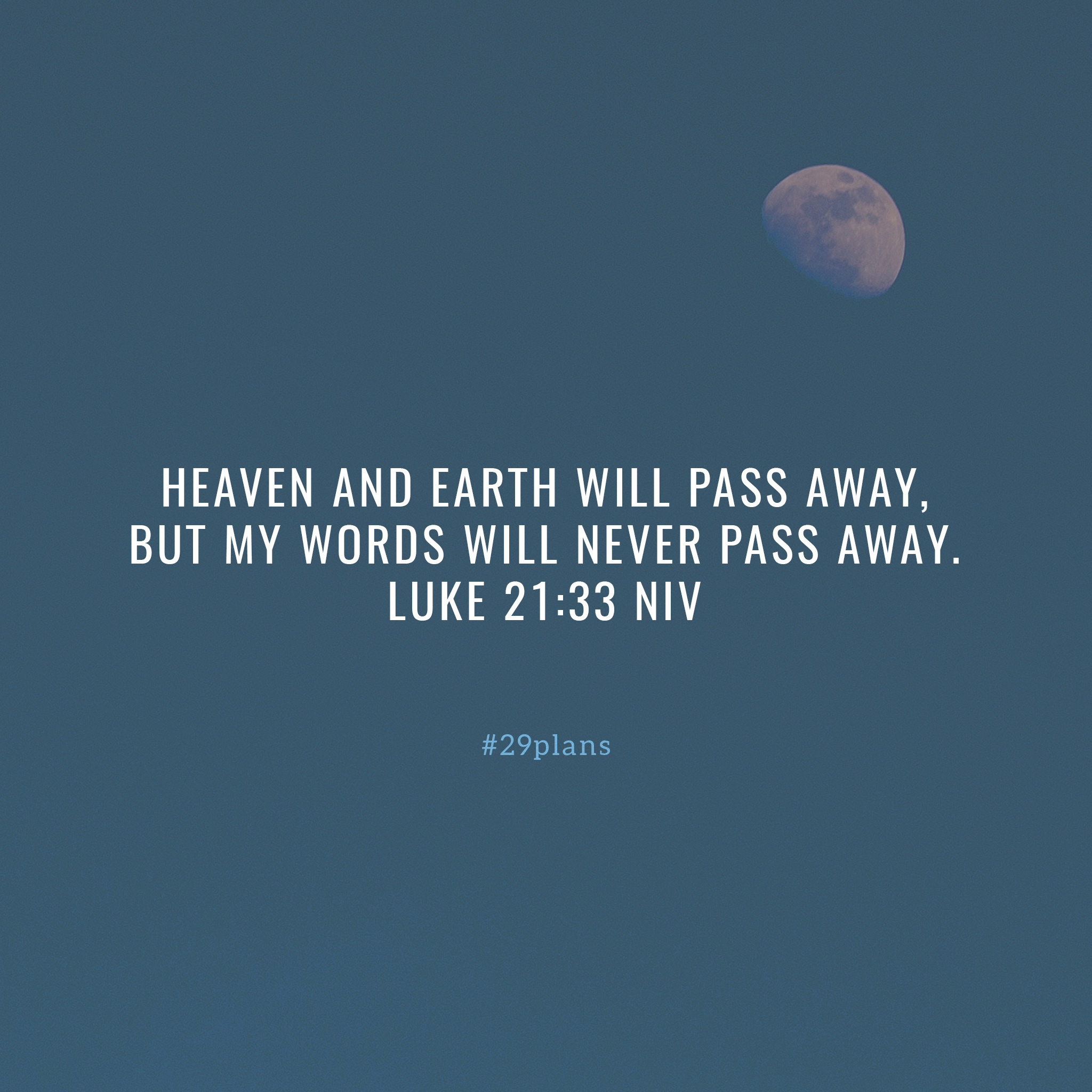 Guide: Read Exodus 1; Luke 21:1-36; Listen to You Will Remain by @PhilmontRock; Pray for Christians in India; Explore persecution.org

Verse of the Day: Heaven and earth will pass away, but my words will never pass away. Luke 21:33 NIV

Song of the Day: You Will Remain by Philmont — Youtube

1 These are the names of the sons of Israel who went to Egypt with Jacob, each with his family: 2 Reuben, Simeon, Levi and Judah; 3 Issachar, Zebulun and Benjamin; 4 Dan and Naphtali; Gad and Asher. 5 The descendants of Jacob numbered seventy[a] in all; Joseph was already in Egypt.

6 Now Joseph and all his brothers and all that generation died, 7 but the Israelites were exceedingly fruitful; they multiplied greatly, increased in numbers and became so numerous that the land was filled with them.

8 Then a new king, to whom Joseph meant nothing, came to power in Egypt. 9 “Look,” he said to his people, “the Israelites have become far too numerous for us. 10 Come, we must deal shrewdly with them or they will become even more numerous and, if war breaks out, will join our enemies, fight against us and leave the country.”

11 So they put slave masters over them to oppress them with forced labor, and they built Pithom and Rameses as store cities for Pharaoh. 12 But the more they were oppressed, the more they multiplied and spread; so the Egyptians came to dread the Israelites 13 and worked them ruthlessly. 14 They made their lives bitter with harsh labor in brick and mortar and with all kinds of work in the fields; in all their harsh labor the Egyptians worked them ruthlessly.

19 The midwives answered Pharaoh, “Hebrew women are not like Egyptian women; they are vigorous and give birth before the midwives arrive.”

20 So God was kind to the midwives and the people increased and became even more numerous. 21 And because the midwives feared God, he gave them families of their own.

22 Then Pharaoh gave this order to all his people: “Every Hebrew boy that is born you must throw into the Nile, but let every girl live.”
–
Footnotes:

1 As Jesus looked up, he saw the rich putting their gifts into the temple treasury. 2 He also saw a poor widow put in two very small copper coins. 3 “Truly I tell you,” he said, “this poor widow has put in more than all the others. 4 All these people gave their gifts out of their wealth; but she out of her poverty put in all she had to live on.”

The Destruction of the Temple and Signs of the End Times

5 Some of his disciples were remarking about how the temple was adorned with beautiful stones and with gifts dedicated to God. But Jesus said, 6 “As for what you see here, the time will come when not one stone will be left on another; every one of them will be thrown down.”

7 “Teacher,” they asked, “when will these things happen? And what will be the sign that they are about to take place?”

8 He replied: “Watch out that you are not deceived. For many will come in my name, claiming, ‘I am he,’ and, ‘The time is near.’ Do not follow them. 9 When you hear of wars and uprisings, do not be frightened. These things must happen first, but the end will not come right away.”

10 Then he said to them: “Nation will rise against nation, and kingdom against kingdom. 11 There will be great earthquakes, famines and pestilences in various places, and fearful events and great signs from heaven.

12 “But before all this, they will seize you and persecute you. They will hand you over to synagogues and put you in prison, and you will be brought before kings and governors, and all on account of my name. 13 And so you will bear testimony to me. 14 But make up your mind not to worry beforehand how you will defend yourselves. 15 For I will give you words and wisdom that none of your adversaries will be able to resist or contradict. 16 You will be betrayed even by parents, brothers and sisters, relatives and friends, and they will put some of you to death. 17 Everyone will hate you because of me. 18 But not a hair of your head will perish. 19 Stand firm, and you will win life.

20 “When you see Jerusalem being surrounded by armies, you will know that its desolation is near. 21 Then let those who are in Judea flee to the mountains, let those in the city get out, and let those in the country not enter the city. 22 For this is the time of punishment in fulfillment of all that has been written. 23 How dreadful it will be in those days for pregnant women and nursing mothers! There will be great distress in the land and wrath against this people. 24 They will fall by the sword and will be taken as prisoners to all the nations. Jerusalem will be trampled on by the Gentiles until the times of the Gentiles are fulfilled.

25 “There will be signs in the sun, moon and stars. On the earth, nations will be in anguish and perplexity at the roaring and tossing of the sea. 26 People will faint from terror, apprehensive of what is coming on the world, for the heavenly bodies will be shaken. 27 At that time they will see the Son of Man coming in a cloud with power and great glory. 28 When these things begin to take place, stand up and lift up your heads, because your redemption is drawing near.”

29 He told them this parable: “Look at the fig tree and all the trees. 30 When they sprout leaves, you can see for yourselves and know that summer is near. 31 Even so, when you see these things happening, you know that the kingdom of God is near.

32 “Truly I tell you, this generation will certainly not pass away until all these things have happened. 33 Heaven and earth will pass away, but my words will never pass away.

34 “Be careful, or your hearts will be weighed down with carousing, drunkenness and the anxieties of life, and that day will close on you suddenly like a trap. 35 For it will come on all those who live on the face of the whole earth. 36 Be always on the watch, and pray that you may be able to escape all that is about to happen, and that you may be able to stand before the Son of Man.”