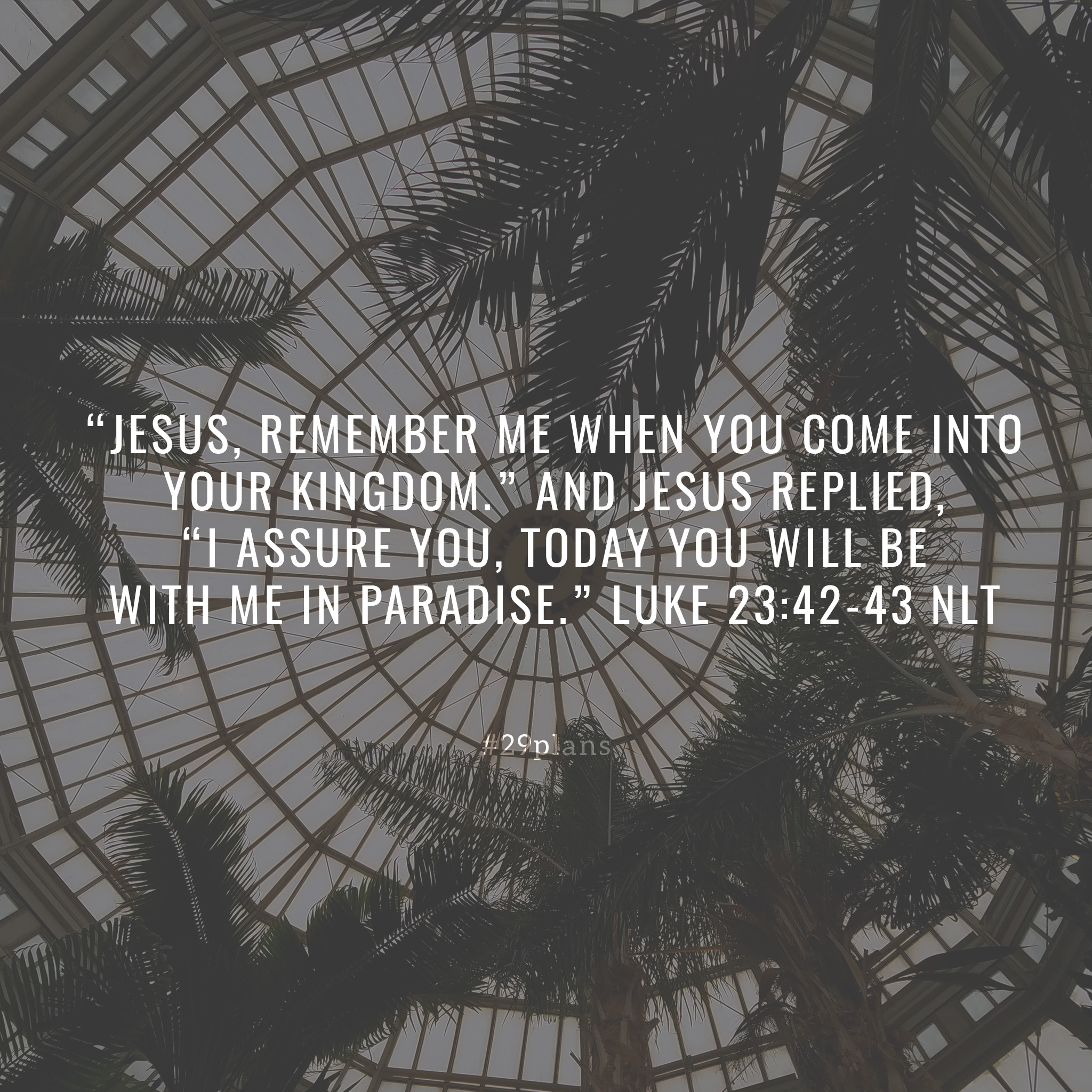 Verse of the Day: “Jesus, remember me when you come into your Kingdom.” and Jesus replied, “I assure you, today you will be with me in paradise.” Luke 23:42-43 NLT

Song of the Day: Thief by Third Day — Youtube

1 Moses’ father-in-law, Jethro, the priest of Midian, heard about everything God had done for Moses and his people, the Israelites. He heard especially about how the Lord had rescued them from Egypt.

2 Earlier, Moses had sent his wife, Zipporah, and his two sons back to Jethro, who had taken them in. 3 (Moses’ first son was named Gershom,[a] for Moses had said when the boy was born, “I have been a foreigner in a foreign land.” 4 His second son was named Eliezer,[b] for Moses had said, “The God of my ancestors was my helper; he rescued me from the sword of Pharaoh.”) 5 Jethro, Moses’ father-in-law, now came to visit Moses in the wilderness. He brought Moses’ wife and two sons with him, and they arrived while Moses and the people were camped near the mountain of God. 6 Jethro had sent a message to Moses, saying, “I, Jethro, your father-in-law, am coming to see you with your wife and your two sons.”

7 So Moses went out to meet his father-in-law. He bowed low and kissed him. They asked about each other’s welfare and then went into Moses’ tent. 8 Moses told his father-in-law everything the Lord had done to Pharaoh and Egypt on behalf of Israel. He also told about all the hardships they had experienced along the way and how the Lord had rescued his people from all their troubles. 9 Jethro was delighted when he heard about all the good things the Lord had done for Israel as he rescued them from the hand of the Egyptians.

10 “Praise the Lord,” Jethro said, “for he has rescued you from the Egyptians and from Pharaoh. Yes, he has rescued Israel from the powerful hand of Egypt! 11 I know now that the Lord is greater than all other gods, because he rescued his people from the oppression of the proud Egyptians.”

12 Then Jethro, Moses’ father-in-law, brought a burnt offering and sacrifices to God. Aaron and all the elders of Israel came out and joined him in a sacrificial meal in God’s presence.

13 The next day, Moses took his seat to hear the people’s disputes against each other. They waited before him from morning till evening.

14 When Moses’ father-in-law saw all that Moses was doing for the people, he asked, “What are you really accomplishing here? Why are you trying to do all this alone while everyone stands around you from morning till evening?”

15 Moses replied, “Because the people come to me to get a ruling from God. 16 When a dispute arises, they come to me, and I am the one who settles the case between the quarreling parties. I inform the people of God’s decrees and give them his instructions.”

17 “This is not good!” Moses’ father-in-law exclaimed. 18 “You’re going to wear yourself out—and the people, too. This job is too heavy a burden for you to handle all by yourself. 19 Now listen to me, and let me give you a word of advice, and may God be with you. You should continue to be the people’s representative before God, bringing their disputes to him. 20 Teach them God’s decrees, and give them his instructions. Show them how to conduct their lives. 21 But select from all the people some capable, honest men who fear God and hate bribes. Appoint them as leaders over groups of one thousand, one hundred, fifty, and ten. 22 They should always be available to solve the people’s common disputes, but have them bring the major cases to you. Let the leaders decide the smaller matters themselves. They will help you carry the load, making the task easier for you. 23 If you follow this advice, and if God commands you to do so, then you will be able to endure the pressures, and all these people will go home in peace.”

24 Moses listened to his father-in-law’s advice and followed his suggestions. 25 He chose capable men from all over Israel and appointed them as leaders over the people. He put them in charge of groups of one thousand, one hundred, fifty, and ten. 26 These men were always available to solve the people’s common disputes. They brought the major cases to Moses, but they took care of the smaller matters themselves.

27 Soon after this, Moses said good-bye to his father-in-law, who returned to his own land.
–
Footnotes:

34 Jesus said, “Father, forgive them, for they don’t know what they are doing.”[a] And the soldiers gambled for his clothes by throwing dice.[b]

35 The crowd watched and the leaders scoffed. “He saved others,” they said, “let him save himself if he is really God’s Messiah, the Chosen One.” 36 The soldiers mocked him, too, by offering him a drink of sour wine. 37 They called out to him, “If you are the King of the Jews, save yourself!” 38 A sign was fastened above him with these words: “This is the King of the Jews.”

39 One of the criminals hanging beside him scoffed, “So you’re the Messiah, are you? Prove it by saving yourself—and us, too, while you’re at it!”

40 But the other criminal protested, “Don’t you fear God even when you have been sentenced to die? 41 We deserve to die for our crimes, but this man hasn’t done anything wrong.” 42 Then he said, “Jesus, remember me when you come into your Kingdom.”

43 And Jesus replied, “I assure you, today you will be with me in paradise.”

The Death of Jesus

44 By this time it was about noon, and darkness fell across the whole land until three o’clock. 45 The light from the sun was gone. And suddenly, the curtain in the sanctuary of the Temple was torn down the middle.
–
Footnotes:

23 When the soldiers had crucified Jesus, they divided his clothes among the four of them. They also took his robe, but it was seamless, woven in one piece from top to bottom. 24 So they said, “Rather than tearing it apart, let’s throw dice[a] for it.” This fulfilled the Scripture that says, “They divided my garments among themselves and threw dice for my clothing.”[b] So that is what they did.

25 Standing near the cross were Jesus’ mother, and his mother’s sister, Mary (the wife of Clopas), and Mary Magdalene. 26 When Jesus saw his mother standing there beside the disciple he loved, he said to her, “Dear woman, here is your son.” 27 And he said to this disciple, “Here is your mother.” And from then on this disciple took her into his home.
–
Footnotes: