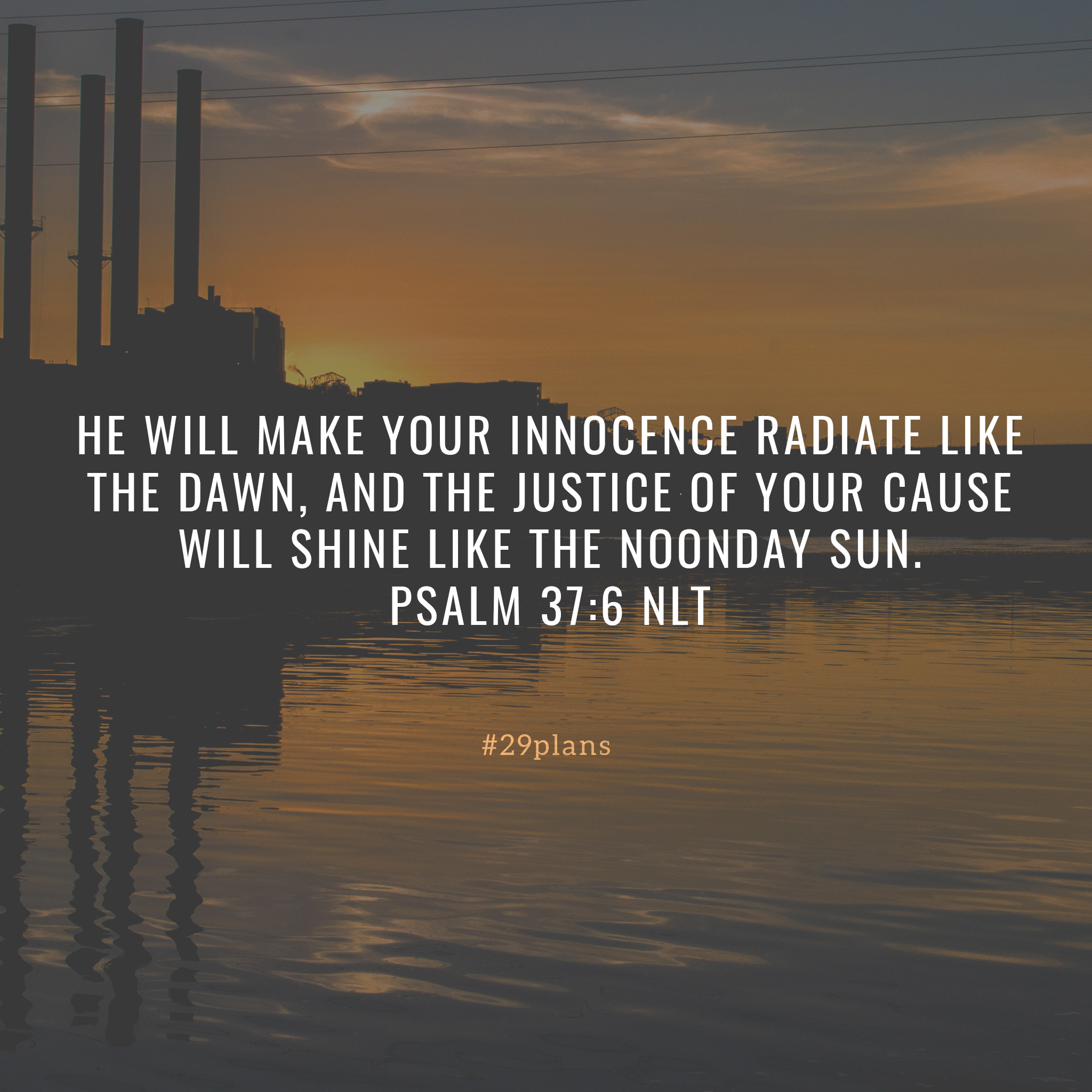 Verse of the Day: He will make your innocence radiate like the dawn, and the justice of your cause will shine like the noonday sun. Psalm 37:6 NLT

A psalm of David.

1 Don’t worry about the wicked
or envy those who do wrong.
2 For like grass, they soon fade away.
Like spring flowers, they soon wither.
3 Trust in the Lord and do good.
Then you will live safely in the land and prosper.
4 Take delight in the Lord,
and he will give you your heart’s desires.
5 Commit everything you do to the Lord.
Trust him, and he will help you.
6 He will make your innocence radiate like the dawn,
and the justice of your cause will shine like the noonday sun.
7 Be still in the presence of the Lord,
and wait patiently for him to act.
Don’t worry about evil people who prosper
or fret about their wicked schemes.
8 Stop being angry!
Turn from your rage!
Do not lose your temper—
it only leads to harm.
9 For the wicked will be destroyed,
but those who trust in the Lord will possess the land.
10 Soon the wicked will disappear.
Though you look for them, they will be gone.
11 The lowly will possess the land
and will live in peace and prosperity.
12 The wicked plot against the godly;
they snarl at them in defiance.
13 But the Lord just laughs,
for he sees their day of judgment coming.
14 The wicked draw their swords
and string their bows
to kill the poor and the oppressed,
to slaughter those who do right.
15 But their swords will stab their own hearts,
and their bows will be broken.
16 It is better to be godly and have little
than to be evil and rich.
17 For the strength of the wicked will be shattered,
but the Lord takes care of the godly.
18 Day by day the Lord takes care of the innocent,
and they will receive an inheritance that lasts forever.
19 They will not be disgraced in hard times;
even in famine they will have more than enough.
20 But the wicked will die.
The Lord’s enemies are like flowers in a field—
they will disappear like smoke.
21 The wicked borrow and never repay,
but the godly are generous givers.
22 Those the Lord blesses will possess the land,
but those he curses will die.
23 The Lord directs the steps of the godly.
He delights in every detail of their lives.
24 Though they stumble, they will never fall,
for the Lord holds them by the hand.
25 Once I was young, and now I am old.
Yet I have never seen the godly abandoned
or their children begging for bread.
26 The godly always give generous loans to others,
and their children are a blessing.
27 Turn from evil and do good,
and you will live in the land forever.
28 For the Lord loves justice,
and he will never abandon the godly.
He will keep them safe forever,
but the children of the wicked will die.
29 The godly will possess the land
and will live there forever.
30 The godly offer good counsel;
they teach right from wrong.
31 They have made God’s law their own,
so they will never slip from his path.
32 The wicked wait in ambush for the godly,
looking for an excuse to kill them.
33 But the Lord will not let the wicked succeed
or let the godly be condemned when they are put on trial.
34 Put your hope in the Lord.
Travel steadily along his path.
He will honor you by giving you the land.
You will see the wicked destroyed.
35 I have seen wicked and ruthless people
flourishing like a tree in its native soil.
36 But when I looked again, they were gone!
Though I searched for them, I could not find them!
37 Look at those who are honest and good,
for a wonderful future awaits those who love peace.
38 But the rebellious will be destroyed;
they have no future.
39 The Lord rescues the godly;
he is their fortress in times of trouble.
40 The Lord helps them,
rescuing them from the wicked.
He saves them,
and they find shelter in him.
–
Footnotes:

46 At about three o’clock, Jesus called out with a loud voice, “Eli, Eli,[a] lema sabachthani?” which means “My God, my God, why have you abandoned me?”[b]

47 Some of the bystanders misunderstood and thought he was calling for the prophet Elijah. 48 One of them ran and filled a sponge with sour wine, holding it up to him on a reed stick so he could drink. 49 But the rest said, “Wait! Let’s see whether Elijah comes to save him.”[c]

50 Then Jesus shouted out again, and he released his spirit. 51 At that moment the curtain in the sanctuary of the Temple was torn in two, from top to bottom. The earth shook, rocks split apart, 52 and tombs opened. The bodies of many godly men and women who had died were raised from the dead. 53 They left the cemetery after Jesus’ resurrection, went into the holy city of Jerusalem, and appeared to many people.

54 The Roman officer[d] and the other soldiers at the crucifixion were terrified by the earthquake and all that had happened. They said, “This man truly was the Son of God!”

The Burial of Jesus

57 As evening approached, Joseph, a rich man from Arimathea who had become a follower of Jesus, 58 went to Pilate and asked for Jesus’ body. And Pilate issued an order to release it to him. 59 Joseph took the body and wrapped it in a long sheet of clean linen cloth. 60 He placed it in his own new tomb, which had been carved out of the rock. Then he rolled a great stone across the entrance and left. 61 Both Mary Magdalene and the other Mary were sitting across from the tomb and watching.

The Guard at the Tomb

62 The next day, on the Sabbath,[e] the leading priests and Pharisees went to see Pilate. 63 They told him, “Sir, we remember what that deceiver once said while he was still alive: ‘After three days I will rise from the dead.’ 64 So we request that you seal the tomb until the third day. This will prevent his disciples from coming and stealing his body and then telling everyone he was raised from the dead! If that happens, we’ll be worse off than we were at first.”

65 Pilate replied, “Take guards and secure it the best you can.” 66 So they sealed the tomb and posted guards to protect it.
–
Footnotes:

The Death of Jesus

28 Jesus knew that his mission was now finished, and to fulfill Scripture he said, “I am thirsty.”[a] 29 A jar of sour wine was sitting there, so they soaked a sponge in it, put it on a hyssop branch, and held it up to his lips. 30 When Jesus had tasted it, he said, “It is finished!” Then he bowed his head and released his spirit.

31 It was the day of preparation, and the Jewish leaders didn’t want the bodies hanging there the next day, which was the Sabbath (and a very special Sabbath, because it was the Passover). So they asked Pilate to hasten their deaths by ordering that their legs be broken. Then their bodies could be taken down. 32 So the soldiers came and broke the legs of the two men crucified with Jesus. 33 But when they came to Jesus, they saw that he was already dead, so they didn’t break his legs. 34 One of the soldiers, however, pierced his side with a spear, and immediately blood and water flowed out. 35 (This report is from an eyewitness giving an accurate account. He speaks the truth so that you also can believe.[b]) 36 These things happened in fulfillment of the Scriptures that say, “Not one of his bones will be broken,”[c] 37 and “They will look on the one they pierced.”[d]

The Burial of Jesus

38 Afterward Joseph of Arimathea, who had been a secret disciple of Jesus (because he feared the Jewish leaders), asked Pilate for permission to take down Jesus’ body. When Pilate gave permission, Joseph came and took the body away. 39 With him came Nicodemus, the man who had come to Jesus at night. He brought about seventy-five pounds[e] of perfumed ointment made from myrrh and aloes. 40 Following Jewish burial custom, they wrapped Jesus’ body with the spices in long sheets of linen cloth. 41 The place of crucifixion was near a garden, where there was a new tomb, never used before. 42 And so, because it was the day of preparation for the Jewish Passover[f] and since the tomb was close at hand, they laid Jesus there.
–
Footnotes: