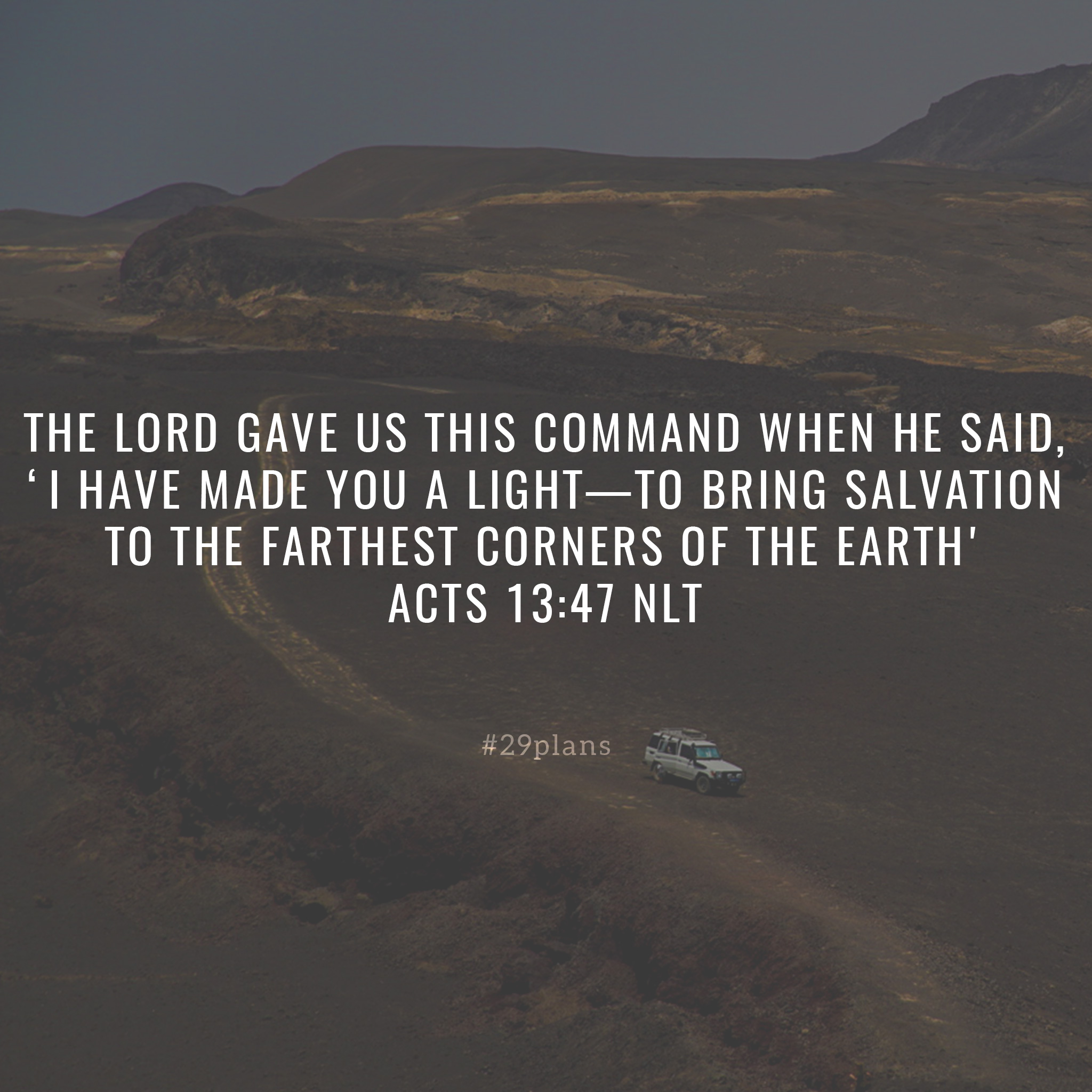 Verse of the Day: The Lord gave us this command when he said, ‘I have made you a light—to bring salvation to the farthest corners of the earth’ Acts13:47 NLT

Song of the Day: Salvation’s Tide by Kristian Stanfill — Youtube

1 The Lord detests the use of dishonest scales,
but he delights in accurate weights.
2 Pride leads to disgrace,
but with humility comes wisdom.
3 Honesty guides good people;
dishonesty destroys treacherous people.
4 Riches won’t help on the day of judgment,
but right living can save you from death.
5 The godly are directed by honesty;
the wicked fall beneath their load of sin.
6 The godliness of good people rescues them;
the ambition of treacherous people traps them.
7 When the wicked die, their hopes die with them,
for they rely on their own feeble strength.
8 The godly are rescued from trouble,
and it falls on the wicked instead.
9 With their words, the godless destroy their friends,
but knowledge will rescue the righteous.
10 The whole city celebrates when the godly succeed;
they shout for joy when the wicked die.
11 Upright citizens are good for a city and make it prosper,
but the talk of the wicked tears it apart.
12 It is foolish to belittle one’s neighbor;
a sensible person keeps quiet.
13 A gossip goes around telling secrets,
but those who are trustworthy can keep a confidence.
14 Without wise leadership, a nation falls;
there is safety in having many advisers.
15 There’s danger in putting up security for a stranger’s debt;
it’s safer not to guarantee another person’s debt.
16 A gracious woman gains respect,
but ruthless men gain only wealth.

Paul Preaches in Antioch of Pisidia

13 Paul and his companions then left Paphos by ship for Pamphylia, landing at the port town of Perga. There John Mark left them and returned to Jerusalem. 14 But Paul and Barnabas traveled inland to Antioch of Pisidia.[a]

On the Sabbath they went to the synagogue for the services. 15 After the usual readings from the books of Moses[b] and the prophets, those in charge of the service sent them this message: “Brothers, if you have any word of encouragement for the people, come and give it.”

16 So Paul stood, lifted his hand to quiet them, and started speaking. “Men of Israel,” he said, “and you God-fearing Gentiles, listen to me.

17 “The God of this nation of Israel chose our ancestors and made them multiply and grow strong during their stay in Egypt. Then with a powerful arm he led them out of their slavery. 18 He put up with them[c] through forty years of wandering in the wilderness. 19 Then he destroyed seven nations in Canaan and gave their land to Israel as an inheritance. 20 All this took about 450 years.

“After that, God gave them judges to rule until the time of Samuel the prophet. 21 Then the people begged for a king, and God gave them Saul son of Kish, a man of the tribe of Benjamin, who reigned for forty years. 22 But God removed Saul and replaced him with David, a man about whom God said, ‘I have found David son of Jesse, a man after my own heart. He will do everything I want him to do.’[d]

23 “And it is one of King David’s descendants, Jesus, who is God’s promised Savior of Israel! 24 Before he came, John the Baptist preached that all the people of Israel needed to repent of their sins and turn to God and be baptized. 25 As John was finishing his ministry he asked, ‘Do you think I am the Messiah? No, I am not! But he is coming soon—and I’m not even worthy to be his slave and untie the sandals on his feet.’

26 “Brothers—you sons of Abraham, and also you God-fearing Gentiles—this message of salvation has been sent to us! 27 The people in Jerusalem and their leaders did not recognize Jesus as the one the prophets had spoken about. Instead, they condemned him, and in doing this they fulfilled the prophets’ words that are read every Sabbath. 28 They found no legal reason to execute him, but they asked Pilate to have him killed anyway.

29 “When they had done all that the prophecies said about him, they took him down from the cross[e] and placed him in a tomb. 30 But God raised him from the dead! 31 And over a period of many days he appeared to those who had gone with him from Galilee to Jerusalem. They are now his witnesses to the people of Israel.

32 “And now we are here to bring you this Good News. The promise was made to our ancestors, 33 and God has now fulfilled it for us, their descendants, by raising Jesus. This is what the second psalm says about Jesus:

‘You are my Son.
Today I have become your Father.[f]’
34 For God had promised to raise him from the dead, not leaving him to rot in the grave. He said, ‘I will give you the sacred blessings I promised to David.’[g] 35 Another psalm explains it more fully: ‘You will not allow your Holy One to rot in the grave.’[h] 36 This is not a reference to David, for after David had done the will of God in his own generation, he died and was buried with his ancestors, and his body decayed. 37 No, it was a reference to someone else—someone whom God raised and whose body did not decay.

38 [i]“Brothers, listen! We are here to proclaim that through this man Jesus there is forgiveness for your sins. 39 Everyone who believes in him is declared right with God—something the law of Moses could never do. 40 Be careful! Don’t let the prophets’ words apply to you. For they said,

41 ‘Look, you mockers,
be amazed and die!
For I am doing something in your own day,
something you wouldn’t believe
even if someone told you about it.’[j]”
42 As Paul and Barnabas left the synagogue that day, the people begged them to speak about these things again the next week. 43 Many Jews and devout converts to Judaism followed Paul and Barnabas, and the two men urged them to continue to rely on the grace of God.

Paul Turns to the Gentiles

44 The following week almost the entire city turned out to hear them preach the word of the Lord. 45 But when some of the Jews saw the crowds, they were jealous; so they slandered Paul and argued against whatever he said.

46 Then Paul and Barnabas spoke out boldly and declared, “It was necessary that we first preach the word of God to you Jews. But since you have rejected it and judged yourselves unworthy of eternal life, we will offer it to the Gentiles. 47 For the Lord gave us this command when he said,

‘I have made you a light to the Gentiles,
to bring salvation to the farthest corners of the earth.’[k]”
48 When the Gentiles heard this, they were very glad and thanked the Lord for his message; and all who were chosen for eternal life became believers. 49 So the Lord’s message spread throughout that region.

50 Then the Jews stirred up the influential religious women and the leaders of the city, and they incited a mob against Paul and Barnabas and ran them out of town. 51 So they shook the dust from their feet as a sign of rejection and went to the town of Iconium. 52 And the believers[l] were filled with joy and with the Holy Spirit.
–
Footnotes: