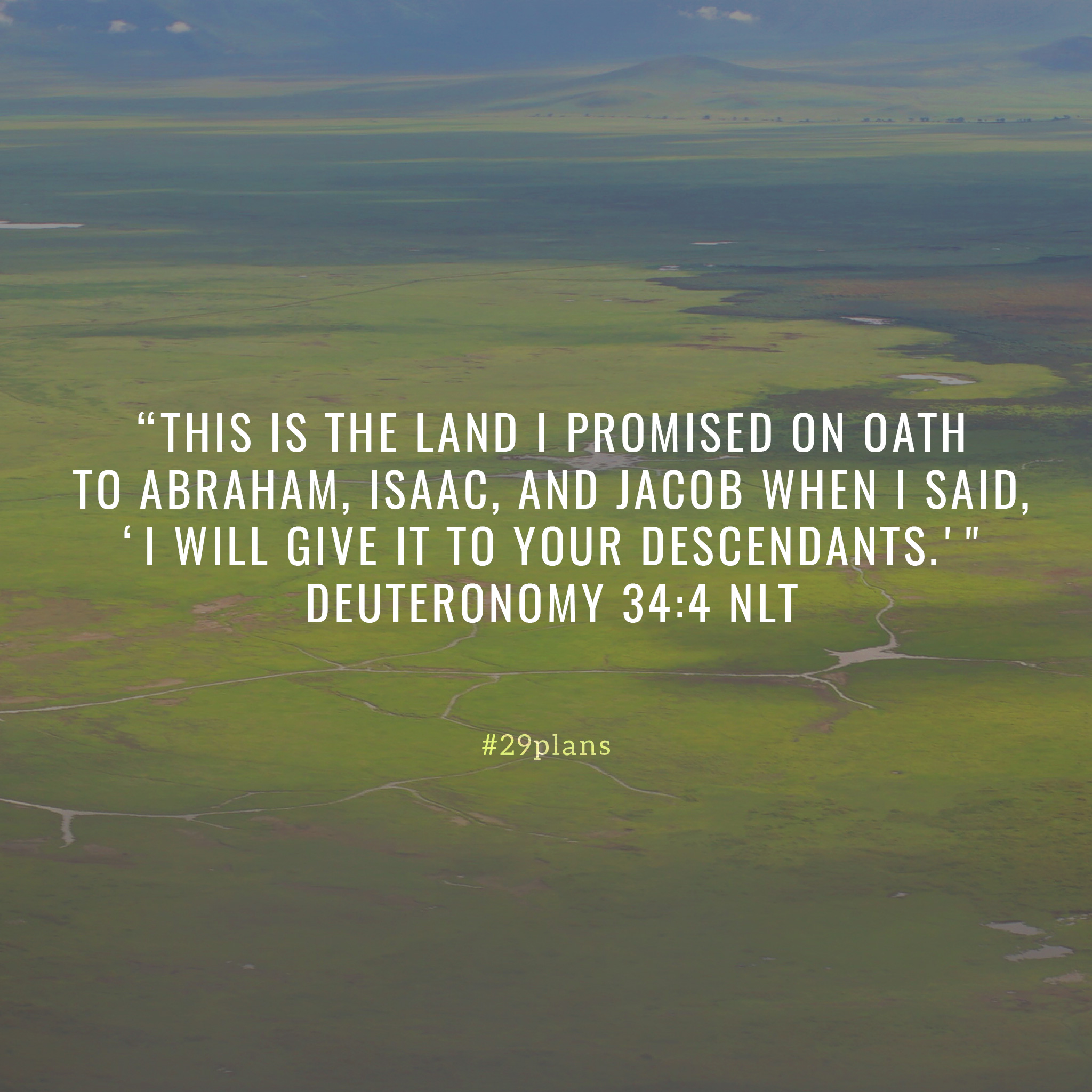 Guide: Read Deuteronomy 34; Acts 18:23-19:22; Listen to Your Promises Remain by @gloriousunseen; Pray for family; How has God kept His promises?

Verse of the Day: “This is the land I promised on oath to Abraham, Isaac, and Jacob when I said, ‘I will give it to your descendants.'”Deuteronomy 34:4 NLT

Song of the Day: Your Promises Still Remain by the Glorious Unseen —  Youtube

The Death of Moses

1 Then Moses went up to Mount Nebo from the plains of Moab and climbed Pisgah Peak, which is across from Jericho. And the Lord showed him the whole land, from Gilead as far as Dan; 2 all the land of Naphtali; the land of Ephraim and Manasseh; all the land of Judah, extending to the Mediterranean Sea[a]; 3 the Negev; the Jordan Valley with Jericho—the city of palms—as far as Zoar. 4 Then the Lord said to Moses, “This is the land I promised on oath to Abraham, Isaac, and Jacob when I said, ‘I will give it to your descendants.’ I have now allowed you to see it with your own eyes, but you will not enter the land.”

5 So Moses, the servant of the Lord, died there in the land of Moab, just as the Lord had said. 6 The Lord buried him[b] in a valley near Beth-peor in Moab, but to this day no one knows the exact place. 7 Moses was 120 years old when he died, yet his eyesight was clear, and he was as strong as ever. 8 The people of Israel mourned for Moses on the plains of Moab for thirty days, until the customary period of mourning was over.

9 Now Joshua son of Nun was full of the spirit of wisdom, for Moses had laid his hands on him. So the people of Israel obeyed him, doing just as the Lord had commanded Moses.

10 There has never been another prophet in Israel like Moses, whom the Lord knew face to face. 11 The Lord sent him to perform all the miraculous signs and wonders in the land of Egypt against Pharaoh, and all his servants, and his entire land. 12 With mighty power, Moses performed terrifying acts in the sight of all Israel.
–
Footnotes:

23 After spending some time in Antioch, Paul went back through Galatia and Phrygia, visiting and strengthening all the believers.[a]

24 Meanwhile, a Jew named Apollos, an eloquent speaker who knew the Scriptures well, had arrived in Ephesus from Alexandria in Egypt. 25 He had been taught the way of the Lord, and he taught others about Jesus with an enthusiastic spirit[b] and with accuracy. However, he knew only about John’s baptism. 26 When Priscilla and Aquila heard him preaching boldly in the synagogue, they took him aside and explained the way of God even more accurately.

27 Apollos had been thinking about going to Achaia, and the brothers and sisters in Ephesus encouraged him to go. They wrote to the believers in Achaia, asking them to welcome him. When he arrived there, he proved to be of great benefit to those who, by God’s grace, had believed. 28 He refuted the Jews with powerful arguments in public debate. Using the Scriptures, he explained to them that Jesus was the Messiah.

1 While Apollos was in Corinth, Paul traveled through the interior regions until he reached Ephesus, on the coast, where he found several believers.[c] 2 “Did you receive the Holy Spirit when you believed?” he asked them.

“No,” they replied, “we haven’t even heard that there is a Holy Spirit.”

3 “Then what baptism did you experience?” he asked.

And they replied, “The baptism of John.”

4 Paul said, “John’s baptism called for repentance from sin. But John himself told the people to believe in the one who would come later, meaning Jesus.”

5 As soon as they heard this, they were baptized in the name of the Lord Jesus. 6 Then when Paul laid his hands on them, the Holy Spirit came on them, and they spoke in other tongues[d] and prophesied. 7 There were about twelve men in all.

8 Then Paul went to the synagogue and preached boldly for the next three months, arguing persuasively about the Kingdom of God. 9 But some became stubborn, rejecting his message and publicly speaking against the Way. So Paul left the synagogue and took the believers with him. Then he held daily discussions at the lecture hall of Tyrannus. 10 This went on for the next two years, so that people throughout the province of Asia—both Jews and Greeks—heard the word of the Lord.

11 God gave Paul the power to perform unusual miracles. 12 When handkerchiefs or aprons that had merely touched his skin were placed on sick people, they were healed of their diseases, and evil spirits were expelled.

13 A group of Jews was traveling from town to town casting out evil spirits. They tried to use the name of the Lord Jesus in their incantation, saying, “I command you in the name of Jesus, whom Paul preaches, to come out!” 14 Seven sons of Sceva, a leading priest, were doing this. 15 But one time when they tried it, the evil spirit replied, “I know Jesus, and I know Paul, but who are you?” 16 Then the man with the evil spirit leaped on them, overpowered them, and attacked them with such violence that they fled from the house, naked and battered.

17 The story of what happened spread quickly all through Ephesus, to Jews and Greeks alike. A solemn fear descended on the city, and the name of the Lord Jesus was greatly honored. 18 Many who became believers confessed their sinful practices. 19 A number of them who had been practicing sorcery brought their incantation books and burned them at a public bonfire. The value of the books was several million dollars.[e] 20 So the message about the Lord spread widely and had a powerful effect.

21 Afterward Paul felt compelled by the Spirit[f] to go over to Macedonia and Achaia before going to Jerusalem. “And after that,” he said, “I must go on to Rome!” 22 He sent his two assistants, Timothy and Erastus, ahead to Macedonia while he stayed awhile longer in the province of Asia.
–
Footnotes: