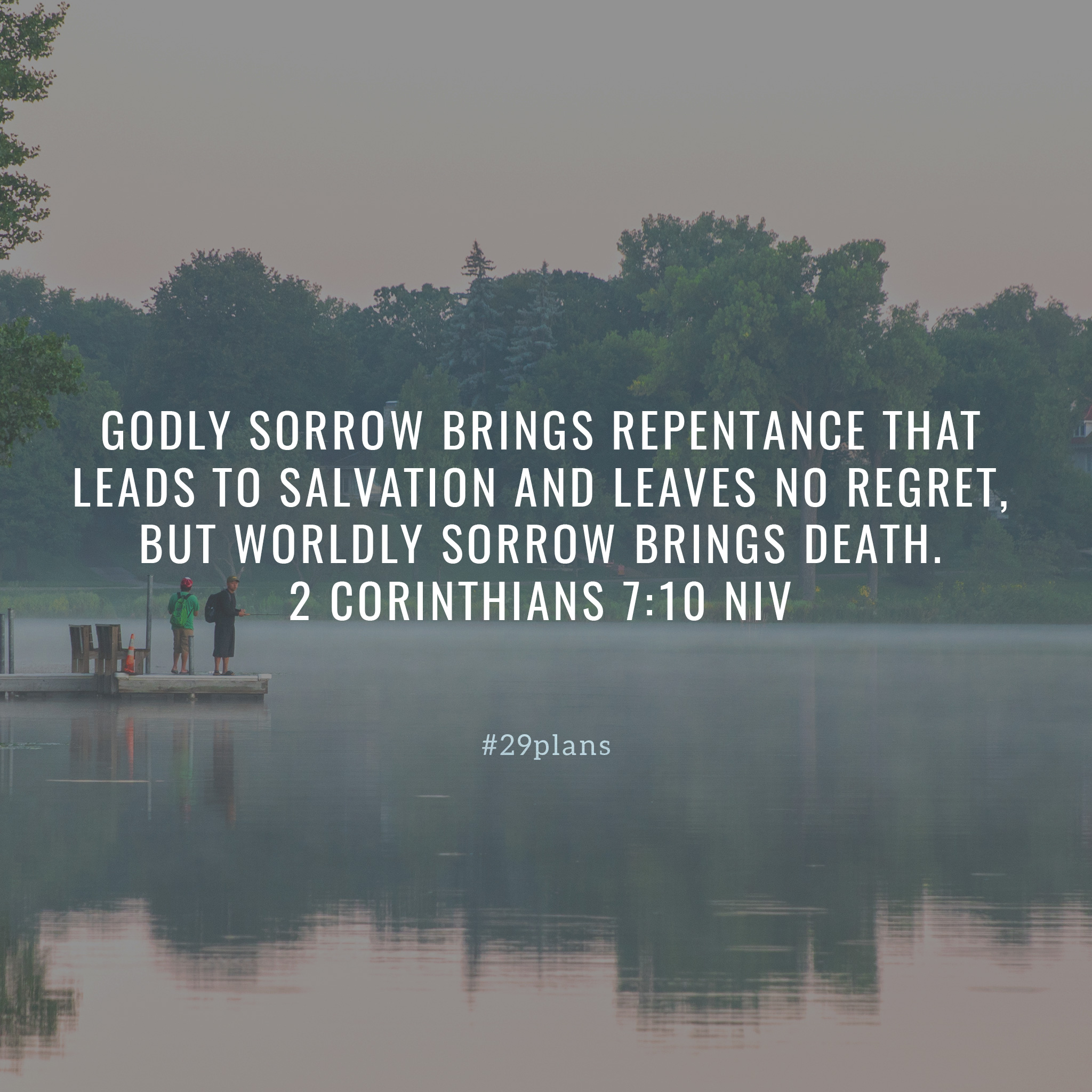 Guide: Read Judges 2; 2 Corinthians 7; Listen to No Regrets by @lecrae; Pray for joy and encouragement in your family; Journal on 2 Corinthians 7:5-16

Song of the Day: No Regrets by Lecrae — Youtube

The Angel of the Lord at Bokim

1 The angel of the Lord went up from Gilgal to Bokim and said, “I brought you up out of Egypt and led you into the land I swore to give to your ancestors. I said, ‘I will never break my covenant with you, 2 and you shall not make a covenant with the people of this land, but you shall break down their altars.’ Yet you have disobeyed me. Why have you done this? 3 And I have also said, ‘I will not drive them out before you; they will become traps for you, and their gods will become snares to you.’”

4 When the angel of the Lord had spoken these things to all the Israelites, the people wept aloud, 5 and they called that place Bokim.[a] There they offered sacrifices to the Lord.

6 After Joshua had dismissed the Israelites, they went to take possession of the land, each to their own inheritance. 7 The people served the Lord throughout the lifetime of Joshua and of the elders who outlived him and who had seen all the great things the Lord had done for Israel.

8 Joshua son of Nun, the servant of the Lord, died at the age of a hundred and ten. 9 And they buried him in the land of his inheritance, at Timnath Heres[b] in the hill country of Ephraim, north of Mount Gaash.

10 After that whole generation had been gathered to their ancestors, another generation grew up who knew neither the Lord nor what he had done for Israel. 11 Then the Israelites did evil in the eyes of the Lord and served the Baals. 12 They forsook the Lord, the God of their ancestors, who had brought them out of Egypt. They followed and worshiped various gods of the peoples around them. They aroused the Lord’s anger 13 because they forsook him and served Baal and the Ashtoreths. 14 In his anger against Israel the Lord gave them into the hands of raiders who plundered them. He sold them into the hands of their enemies all around, whom they were no longer able to resist. 15 Whenever Israel went out to fight, the hand of the Lord was against them to defeat them, just as he had sworn to them. They were in great distress.

16 Then the Lord raised up judges,[c] who saved them out of the hands of these raiders. 17 Yet they would not listen to their judges but prostituted themselves to other gods and worshiped them. They quickly turned from the ways of their ancestors, who had been obedient to the Lord’s commands. 18 Whenever the Lord raised up a judge for them, he was with the judge and saved them out of the hands of their enemies as long as the judge lived; for the Lord relented because of their groaning under those who oppressed and afflicted them. 19 But when the judge died, the people returned to ways even more corrupt than those of their ancestors, following other gods and serving and worshiping them. They refused to give up their evil practices and stubborn ways.

20 Therefore the Lord was very angry with Israel and said, “Because this nation has violated the covenant I ordained for their ancestors and has not listened to me, 21 I will no longer drive out before them any of the nations Joshua left when he died. 22 I will use them to test Israel and see whether they will keep the way of the Lord and walk in it as their ancestors did.” 23 The Lord had allowed those nations to remain; he did not drive them out at once by giving them into the hands of Joshua.
–
Footnotes:

1 Therefore, since we have these promises, dear friends, let us purify ourselves from everything that contaminates body and spirit, perfecting holiness out of reverence for God.

Paul’s Joy Over the Church’s Repentance

2 Make room for us in your hearts. We have wronged no one, we have corrupted no one, we have exploited no one. 3 I do not say this to condemn you; I have said before that you have such a place in our hearts that we would live or die with you. 4 I have spoken to you with great frankness; I take great pride in you. I am greatly encouraged; in all our troubles my joy knows no bounds.

5 For when we came into Macedonia, we had no rest, but we were harassed at every turn—conflicts on the outside, fears within. 6 But God, who comforts the downcast, comforted us by the coming of Titus, 7 and not only by his coming but also by the comfort you had given him. He told us about your longing for me, your deep sorrow, your ardent concern for me, so that my joy was greater than ever.

8 Even if I caused you sorrow by my letter, I do not regret it. Though I did regret it—I see that my letter hurt you, but only for a little while— 9 yet now I am happy, not because you were made sorry, but because your sorrow led you to repentance. For you became sorrowful as God intended and so were not harmed in any way by us. 10 Godly sorrow brings repentance that leads to salvation and leaves no regret, but worldly sorrow brings death. 11 See what this godly sorrow has produced in you: what earnestness, what eagerness to clear yourselves, what indignation, what alarm, what longing, what concern, what readiness to see justice done. At every point you have proved yourselves to be innocent in this matter. 12 So even though I wrote to you, it was neither on account of the one who did the wrong nor on account of the injured party, but rather that before God you could see for yourselves how devoted to us you are. 13 By all this we are encouraged.

In addition to our own encouragement, we were especially delighted to see how happy Titus was, because his spirit has been refreshed by all of you. 14 I had boasted to him about you, and you have not embarrassed me. But just as everything we said to you was true, so our boasting about you to Titus has proved to be true as well. 15 And his affection for you is all the greater when he remembers that you were all obedient, receiving him with fear and trembling. 16 I am glad I can have complete confidence in you.