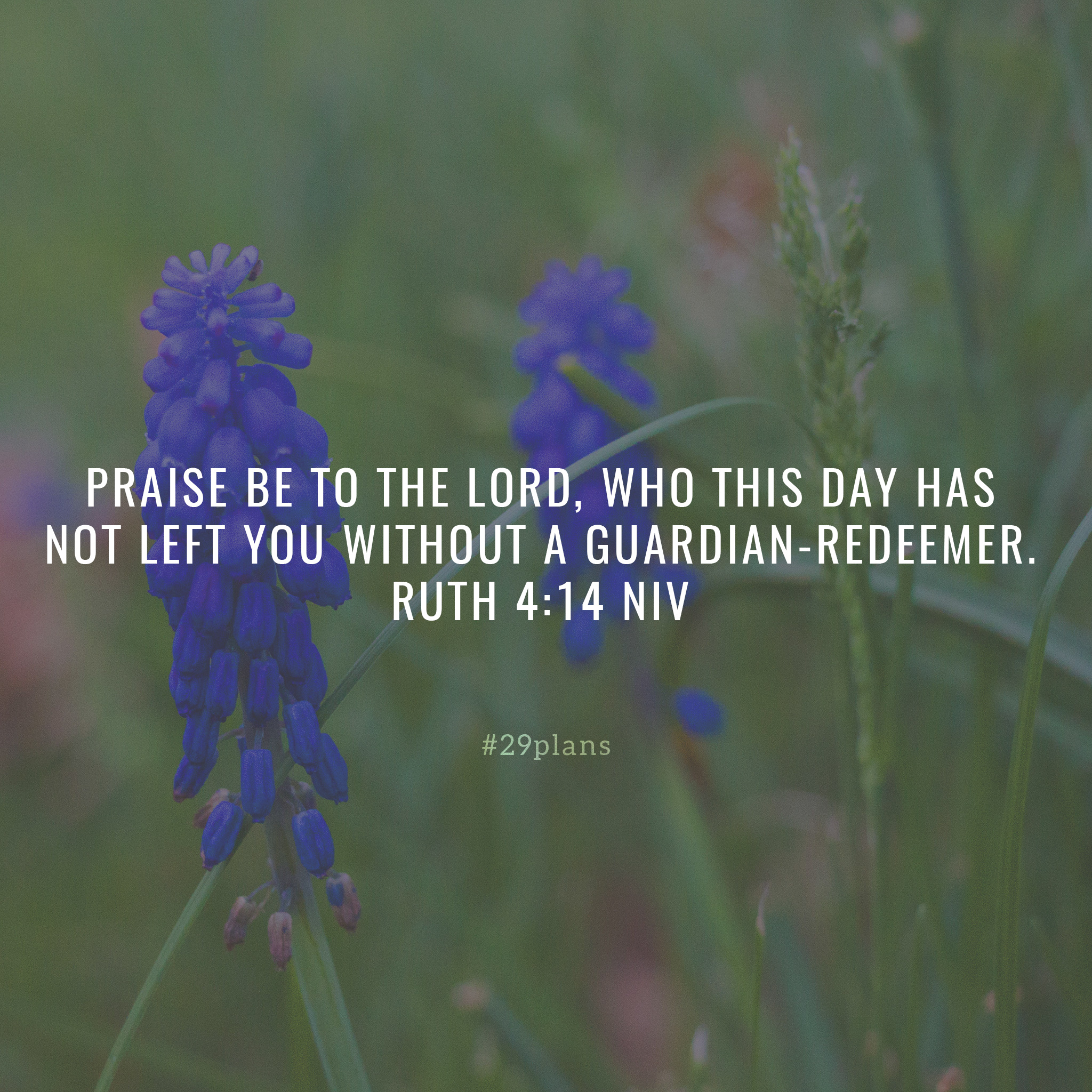 Guide: Read Ruth 4; Romans 4; Listen to Redeemer by @kutless; Pray for the redemption of Iraq; Journal on what “redeemed” means

Verse of the Day: Praise be to the Lord, who this day has not left you without a guardian-redeemer. Ruth 4:14 NIV

1 Meanwhile Boaz went up to the town gate and sat down there just as the guardian-redeemer[a] he had mentioned came along. Boaz said, “Come over here, my friend, and sit down.” So he went over and sat down.

2 Boaz took ten of the elders of the town and said, “Sit here,” and they did so. 3 Then he said to the guardian-redeemer, “Naomi, who has come back from Moab, is selling the piece of land that belonged to our relative Elimelek. 4 I thought I should bring the matter to your attention and suggest that you buy it in the presence of these seated here and in the presence of the elders of my people. If you will redeem it, do so. But if you[b] will not, tell me, so I will know. For no one has the right to do it except you, and I am next in line.”

5 Then Boaz said, “On the day you buy the land from Naomi, you also acquire Ruth the Moabite, the[c] dead man’s widow, in order to maintain the name of the dead with his property.”

6 At this, the guardian-redeemer said, “Then I cannot redeem it because I might endanger my own estate. You redeem it yourself. I cannot do it.”

7 (Now in earlier times in Israel, for the redemption and transfer of property to become final, one party took off his sandal and gave it to the other. This was the method of legalizing transactions in Israel.)

8 So the guardian-redeemer said to Boaz, “Buy it yourself.” And he removed his sandal.

9 Then Boaz announced to the elders and all the people, “Today you are witnesses that I have bought from Naomi all the property of Elimelek, Kilion and Mahlon. 10 I have also acquired Ruth the Moabite, Mahlon’s widow, as my wife, in order to maintain the name of the dead with his property, so that his name will not disappear from among his family or from his hometown. Today you are witnesses!”

11 Then the elders and all the people at the gate said, “We are witnesses. May the Lord make the woman who is coming into your home like Rachel and Leah, who together built up the family of Israel. May you have standing in Ephrathah and be famous in Bethlehem. 12 Through the offspring the Lord gives you by this young woman, may your family be like that of Perez, whom Tamar bore to Judah.”

13 So Boaz took Ruth and she became his wife. When he made love to her, the Lord enabled her to conceive, and she gave birth to a son. 14 The women said to Naomi: “Praise be to the Lord, who this day has not left you without a guardian-redeemer. May he become famous throughout Israel! 15 He will renew your life and sustain you in your old age. For your daughter-in-law, who loves you and who is better to you than seven sons, has given him birth.”

16 Then Naomi took the child in her arms and cared for him. 17 The women living there said, “Naomi has a son!” And they named him Obed. He was the father of Jesse, the father of David.

The Genealogy of David

Perez was the father of Hezron,

19 Hezron the father of Ram,

Ram the father of Amminadab,

20 Amminadab the father of Nahshon,

Nahshon the father of Salmon,[d]

21 Salmon the father of Boaz,

Boaz the father of Obed,

22 Obed the father of Jesse,

and Jesse the father of David.
–
Footnotes:

1 What then shall we say that Abraham, our forefather according to the flesh, discovered in this matter? 2 If, in fact, Abraham was justified by works, he had something to boast about—but not before God. 3 What does Scripture say? “Abraham believed God, and it was credited to him as righteousness.”[a]

7 “Blessed are those
whose transgressions are forgiven,
whose sins are covered.
8 Blessed is the one
whose sin the Lord will never count against them.”[b] 9 Is this blessedness only for the circumcised, or also for the uncircumcised? We have been saying that Abraham’s faith was credited to him as righteousness. 10 Under what circumstances was it credited? Was it after he was circumcised, or before? It was not after, but before! 11 And he received circumcision as a sign, a seal of the righteousness that he had by faith while he was still uncircumcised. So then, he is the father of all who believe but have not been circumcised, in order that righteousness might be credited to them. 12 And he is then also the father of the circumcised who not only are circumcised but who also follow in the footsteps of the faith that our father Abraham had before he was circumcised.

13 It was not through the law that Abraham and his offspring received the promise that he would be heir of the world, but through the righteousness that comes by faith. 14 For if those who depend on the law are heirs, faith means nothing and the promise is worthless, 15 because the law brings wrath. And where there is no law there is no transgression.

16 Therefore, the promise comes by faith, so that it may be by grace and may be guaranteed to all Abraham’s offspring—not only to those who are of the law but also to those who have the faith of Abraham. He is the father of us all. 17 As it is written: “I have made you a father of many nations.”[c] He is our father in the sight of God, in whom he believed—the God who gives life to the dead and calls into being things that were not.

18 Against all hope, Abraham in hope believed and so became the father of many nations, just as it had been said to him, “So shall your offspring be.”[d] 19 Without weakening in his faith, he faced the fact that his body was as good as dead—since he was about a hundred years old—and that Sarah’s womb was also dead. 20 Yet he did not waver through unbelief regarding the promise of God, but was strengthened in his faith and gave glory to God, 21 being fully persuaded that God had power to do what he had promised. 22 This is why “it was credited to him as righteousness.” 23 The words “it was credited to him” were written not for him alone, 24 but also for us, to whom God will credit righteousness—for us who believe in him who raised Jesus our Lord from the dead. 25 He was delivered over to death for our sins and was raised to life for our justification.
–
Footnotes: