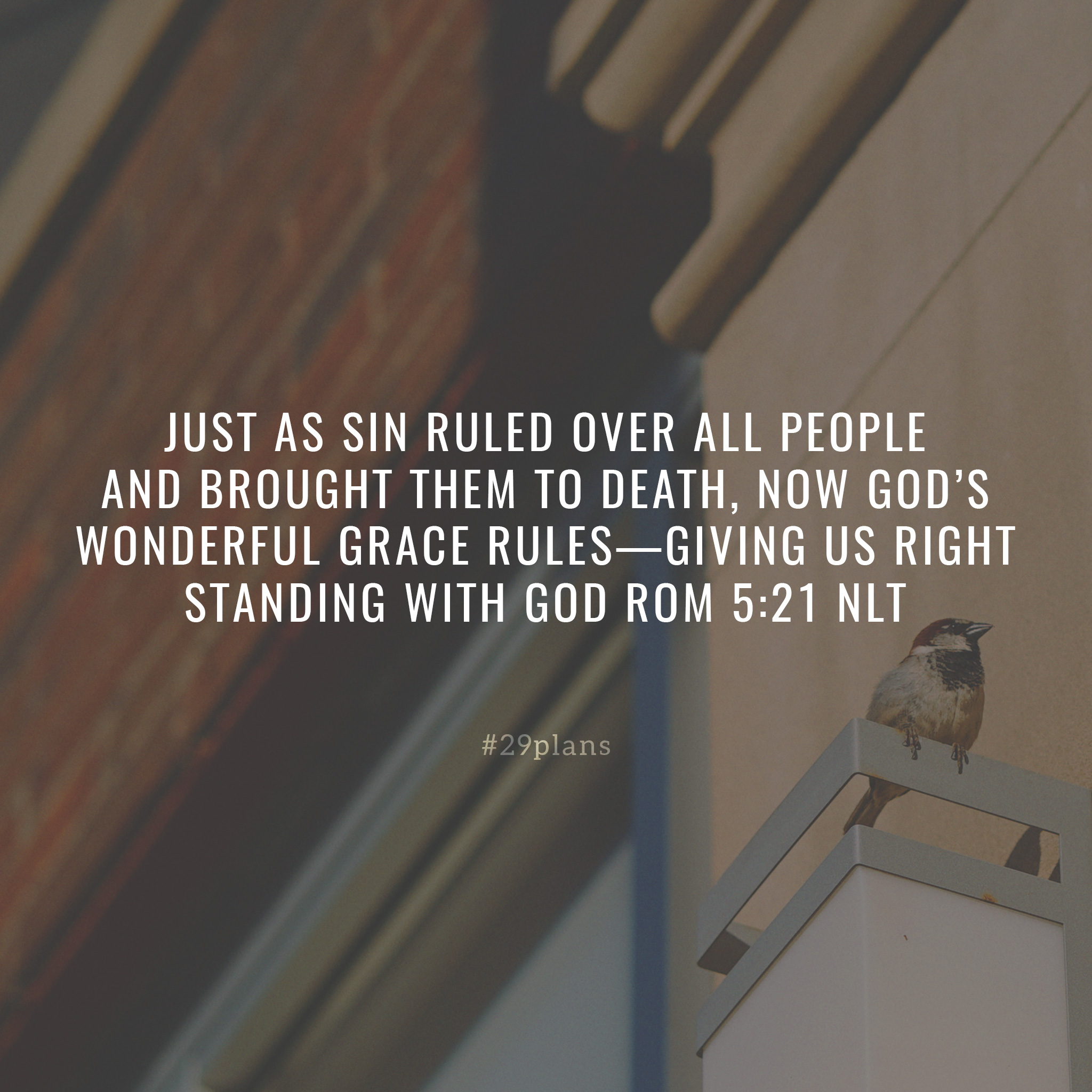 Guide: Read Romans 5-6; Listen to Scandal of Grace by @hillsongunited; Pray for family; Do something unexpected for family

Verse of the Day: Just as sin ruled over all people and brought them to death, now God’s wonderful grace rules—giving us right standing with God Rom 5:21 NLT

Song of the Day: Scandal of Grace by Hillsong United — Youtube

1 Therefore, since we have been made right in God’s sight by faith, we have peace with God because of what Jesus Christ our Lord has done for us. 2 Because of our faith, Christ has brought us into this place of undeserved privilege where we now stand, and we confidently and joyfully look forward to sharing God’s glory.

3 We can rejoice, too, when we run into problems and trials, for we know that they help us develop endurance. 4 And endurance develops strength of character, and character strengthens our confident hope of salvation. 5 And this hope will not lead to disappointment. For we know how dearly God loves us, because he has given us the Holy Spirit to fill our hearts with his love.

6 When we were utterly helpless, Christ came at just the right time and died for us sinners. 7 Now, most people would not be willing to die for an upright person, though someone might perhaps be willing to die for a person who is especially good. 8 But God showed his great love for us by sending Christ to die for us while we were still sinners. 9 And since we have been made right in God’s sight by the blood of Christ, he will certainly save us from God’s condemnation. 10 For since our friendship with God was restored by the death of his Son while we were still his enemies, we will certainly be saved through the life of his Son. 11 So now we can rejoice in our wonderful new relationship with God because our Lord Jesus Christ has made us friends of God.

20 God’s law was given so that all people could see how sinful they were. But as people sinned more and more, God’s wonderful grace became more abundant. 21 So just as sin ruled over all people and brought them to death, now God’s wonderful grace rules instead, giving us right standing with God and resulting in eternal life through Jesus Christ our Lord.

1 Well then, should we keep on sinning so that God can show us more and more of his wonderful grace? 2 Of course not! Since we have died to sin, how can we continue to live in it? 3 Or have you forgotten that when we were joined with Christ Jesus in baptism, we joined him in his death? 4 For we died and were buried with Christ by baptism. And just as Christ was raised from the dead by the glorious power of the Father, now we also may live new lives.

5 Since we have been united with him in his death, we will also be raised to life as he was. 6 We know that our old sinful selves were crucified with Christ so that sin might lose its power in our lives. We are no longer slaves to sin. 7 For when we died with Christ we were set free from the power of sin. 8 And since we died with Christ, we know we will also live with him. 9 We are sure of this because Christ was raised from the dead, and he will never die again. Death no longer has any power over him. 10 When he died, he died once to break the power of sin. But now that he lives, he lives for the glory of God. 11 So you also should consider yourselves to be dead to the power of sin and alive to God through Christ Jesus.

12 Do not let sin control the way you live;[a] do not give in to sinful desires. 13 Do not let any part of your body become an instrument of evil to serve sin. Instead, give yourselves completely to God, for you were dead, but now you have new life. So use your whole body as an instrument to do what is right for the glory of God. 14 Sin is no longer your master, for you no longer live under the requirements of the law. Instead, you live under the freedom of God’s grace.

15 Well then, since God’s grace has set us free from the law, does that mean we can go on sinning? Of course not! 16 Don’t you realize that you become the slave of whatever you choose to obey? You can be a slave to sin, which leads to death, or you can choose to obey God, which leads to righteous living. 17 Thank God! Once you were slaves of sin, but now you wholeheartedly obey this teaching we have given you. 18 Now you are free from your slavery to sin, and you have become slaves to righteous living.

19 Because of the weakness of your human nature, I am using the illustration of slavery to help you understand all this. Previously, you let yourselves be slaves to impurity and lawlessness, which led ever deeper into sin. Now you must give yourselves to be slaves to righteous living so that you will become holy.

20 When you were slaves to sin, you were free from the obligation to do right. 21 And what was the result? You are now ashamed of the things you used to do, things that end in eternal doom. 22 But now you are free from the power of sin and have become slaves of God. Now you do those things that lead to holiness and result in eternal life. 23 For the wages of sin is death, but the free gift of God is eternal life through Christ Jesus our Lord.
–
Footnotes: