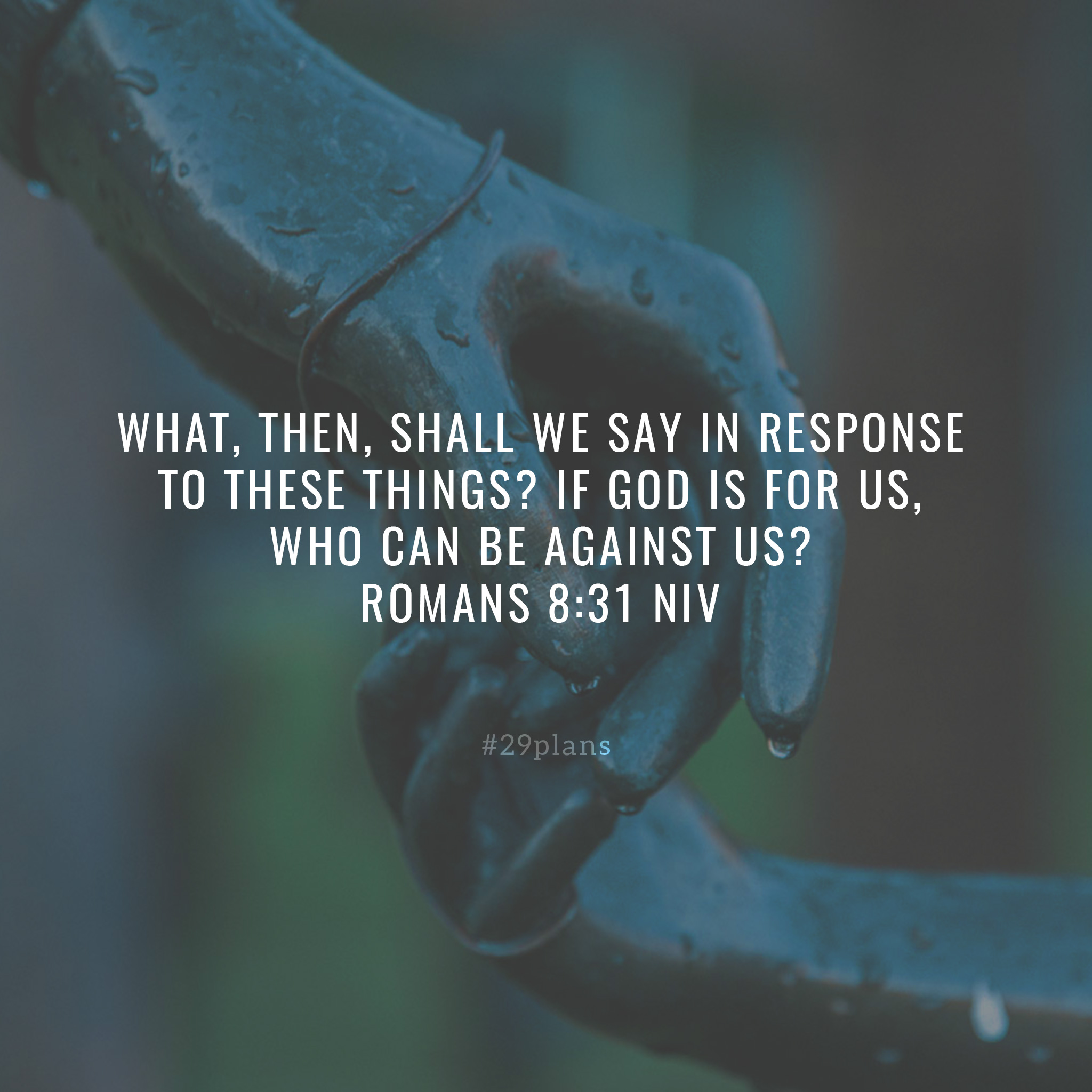 Guide: Read 1 Samuel 3; Romans 8:18-39; Listen to Our God by @israelhoughton; Pray for those feeling separate from God; Memorize Rom 8:31

Verse of the Day: What, then, shall we say in response to these things? If God is for us, who can be against us? Romans 8:31 NIV

Song of the Day: Our God by Israel Houghton — Youtube

1 The boy Samuel ministered before the Lord under Eli. In those days the word of the Lord was rare; there were not many visions.

2 One night Eli, whose eyes were becoming so weak that he could barely see, was lying down in his usual place. 3 The lamp of God had not yet gone out, and Samuel was lying down in the house of the Lord, where the ark of God was. 4 Then the Lord called Samuel.

But Eli said, “I did not call; go back and lie down.” So he went and lay down.

6 Again the Lord called, “Samuel!” And Samuel got up and went to Eli and said, “Here I am; you called me.”

7 Now Samuel did not yet know the Lord: The word of the Lord had not yet been revealed to him.

8 A third time the Lord called, “Samuel!” And Samuel got up and went to Eli and said, “Here I am; you called me.”

Then Eli realized that the Lord was calling the boy. 9 So Eli told Samuel, “Go and lie down, and if he calls you, say, ‘Speak, Lord, for your servant is listening.’” So Samuel went and lay down in his place.

10 The Lord came and stood there, calling as at the other times, “Samuel! Samuel!”

Then Samuel said, “Speak, for your servant is listening.”

11 And the Lord said to Samuel: “See, I am about to do something in Israel that will make the ears of everyone who hears about it tingle. 12 At that time I will carry out against Eli everything I spoke against his family—from beginning to end. 13 For I told him that I would judge his family forever because of the sin he knew about; his sons blasphemed God,[a] and he failed to restrain them. 14 Therefore I swore to the house of Eli, ‘The guilt of Eli’s house will never be atoned for by sacrifice or offering.’”

15 Samuel lay down until morning and then opened the doors of the house of the Lord. He was afraid to tell Eli the vision, 16 but Eli called him and said, “Samuel, my son.”

Samuel answered, “Here I am.”

17 “What was it he said to you?” Eli asked. “Do not hide it from me. May God deal with you, be it ever so severely, if you hide from me anything he told you.” 18 So Samuel told him everything, hiding nothing from him. Then Eli said, “He is the Lord; let him do what is good in his eyes.”

19 The Lord was with Samuel as he grew up, and he let none of Samuel’s words fall to the ground. 20 And all Israel from Dan to Beersheba recognized that Samuel was attested as a prophet of the Lord. 21 The Lord continued to appear at Shiloh, and there he revealed himself to Samuel through his word.
–
Footnotes:

18 I consider that our present sufferings are not worth comparing with the glory that will be revealed in us. 19 For the creation waits in eager expectation for the children of God to be revealed. 20 For the creation was subjected to frustration, not by its own choice, but by the will of the one who subjected it, in hope 21 that[a] the creation itself will be liberated from its bondage to decay and brought into the freedom and glory of the children of God.

22 We know that the whole creation has been groaning as in the pains of childbirth right up to the present time. 23 Not only so, but we ourselves, who have the firstfruits of the Spirit, groan inwardly as we wait eagerly for our adoption to sonship, the redemption of our bodies. 24 For in this hope we were saved. But hope that is seen is no hope at all. Who hopes for what they already have? 25 But if we hope for what we do not yet have, we wait for it patiently.

26 In the same way, the Spirit helps us in our weakness. We do not know what we ought to pray for, but the Spirit himself intercedes for us through wordless groans. 27 And he who searches our hearts knows the mind of the Spirit, because the Spirit intercedes for God’s people in accordance with the will of God.

28 And we know that in all things God works for the good of those who love him, who[b] have been called according to his purpose. 29 For those God foreknew he also predestined to be conformed to the image of his Son, that he might be the firstborn among many brothers and sisters. 30 And those he predestined, he also called; those he called, he also justified; those he justified, he also glorified.

31 What, then, shall we say in response to these things? If God is for us, who can be against us? 32 He who did not spare his own Son, but gave him up for us all—how will he not also, along with him, graciously give us all things? 33 Who will bring any charge against those whom God has chosen? It is God who justifies. 34 Who then is the one who condemns? No one. Christ Jesus who died—more than that, who was raised to life—is at the right hand of God and is also interceding for us. 35 Who shall separate us from the love of Christ? Shall trouble or hardship or persecution or famine or nakedness or danger or sword? 36 As it is written:

“For your sake we face death all day long;
we are considered as sheep to be slaughtered.”[c] 37 No, in all these things we are more than conquerors through him who loved us. 38 For I am convinced that neither death nor life, neither angels nor demons,[d] neither the present nor the future, nor any powers, 39 neither height nor depth, nor anything else in all creation, will be able to separate us from the love of God that is in Christ Jesus our Lord.
–
Footnotes: