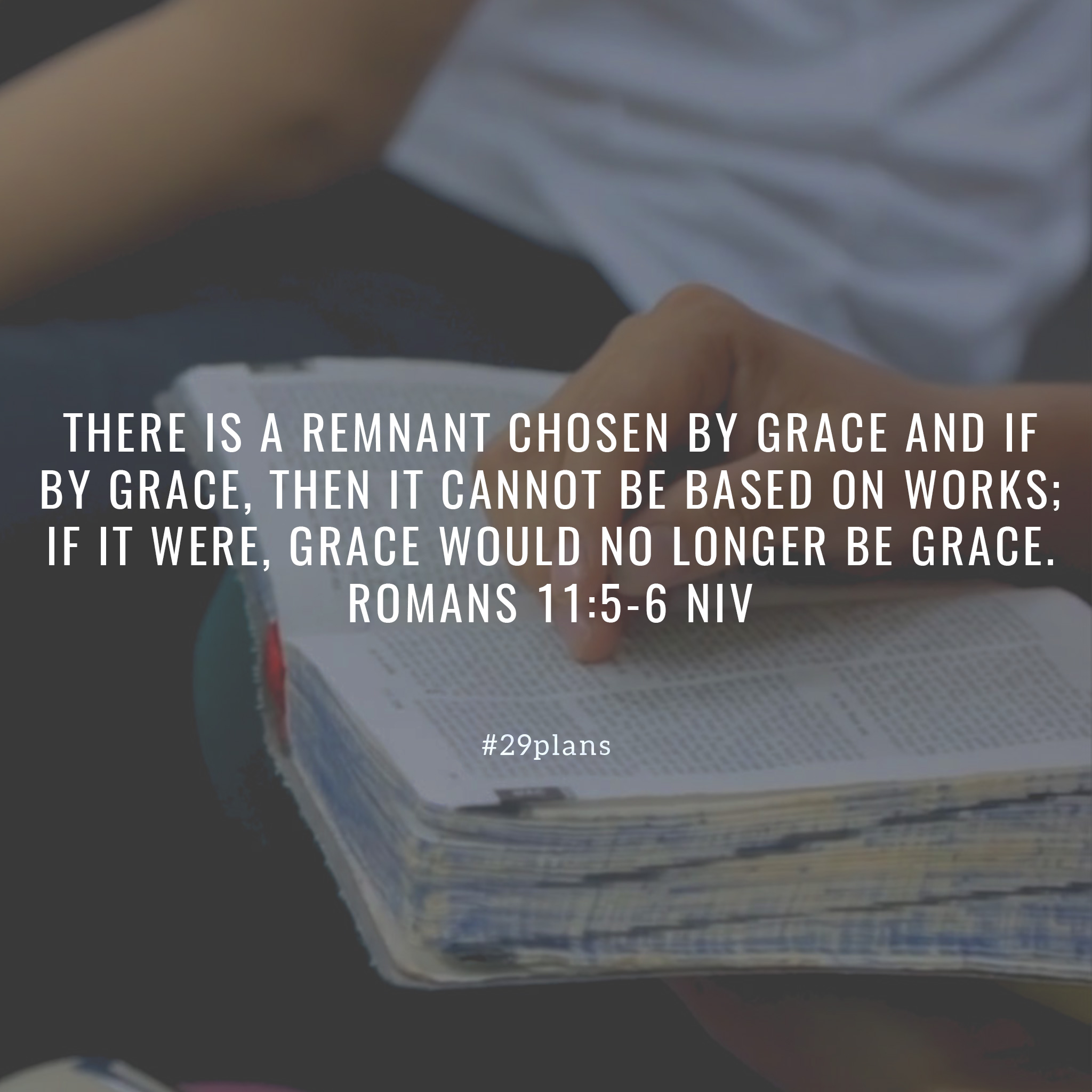 Guide: Read 1 Samuel 5; Romans 11:1-12; Listen to Grace to Grace by @hillsongworship; Pray for salvation and grace to abound; Journal on Romans 11:5-6

Verse of the Day: There is a remnant chosen by grace and if by grace, then it cannot be based on works; if it were, grace would no longer be grace. Romans 11:5-6 NIV

Song of the Day: Grace to Grace by Hillsong Worship — Youtube

The Ark in Ashdod and Ekron

6 The Lord’s hand was heavy on the people of Ashdod and its vicinity; he brought devastation on them and afflicted them with tumors.[a] 7 When the people of Ashdod saw what was happening, they said, “The ark of the god of Israel must not stay here with us, because his hand is heavy on us and on Dagon our god.” 8 So they called together all the rulers of the Philistines and asked them, “What shall we do with the ark of the god of Israel?”

9 But after they had moved it, the Lord’s hand was against that city, throwing it into a great panic. He afflicted the people of the city, both young and old, with an outbreak of tumors.[b] 10 So they sent the ark of God to Ekron.

As the ark of God was entering Ekron, the people of Ekron cried out, “They have brought the ark of the god of Israel around to us to kill us and our people.” 11 So they called together all the rulers of the Philistines and said, “Send the ark of the god of Israel away; let it go back to its own place, or it[c] will kill us and our people.” For death had filled the city with panic; God’s hand was very heavy on it. 12 Those who did not die were afflicted with tumors, and the outcry of the city went up to heaven.
–
Footnotes:

The Remnant of Israel

1 I ask then: Did God reject his people? By no means! I am an Israelite myself, a descendant of Abraham, from the tribe of Benjamin. 2 God did not reject his people, whom he foreknew. Don’t you know what Scripture says in the passage about Elijah—how he appealed to God against Israel: 3 “Lord, they have killed your prophets and torn down your altars; I am the only one left, and they are trying to kill me”[a]? 4 And what was God’s answer to him? “I have reserved for myself seven thousand who have not bowed the knee to Baal.”[b] 5 So too, at the present time there is a remnant chosen by grace. 6 And if by grace, then it cannot be based on works; if it were, grace would no longer be grace.

7 What then? What the people of Israel sought so earnestly they did not obtain. The elect among them did, but the others were hardened, 8 as it is written:

“May their table become a snare and a trap,
a stumbling block and a retribution for them.
10 May their eyes be darkened so they cannot see,
and their backs be bent forever.”[d] Ingrafted Branches