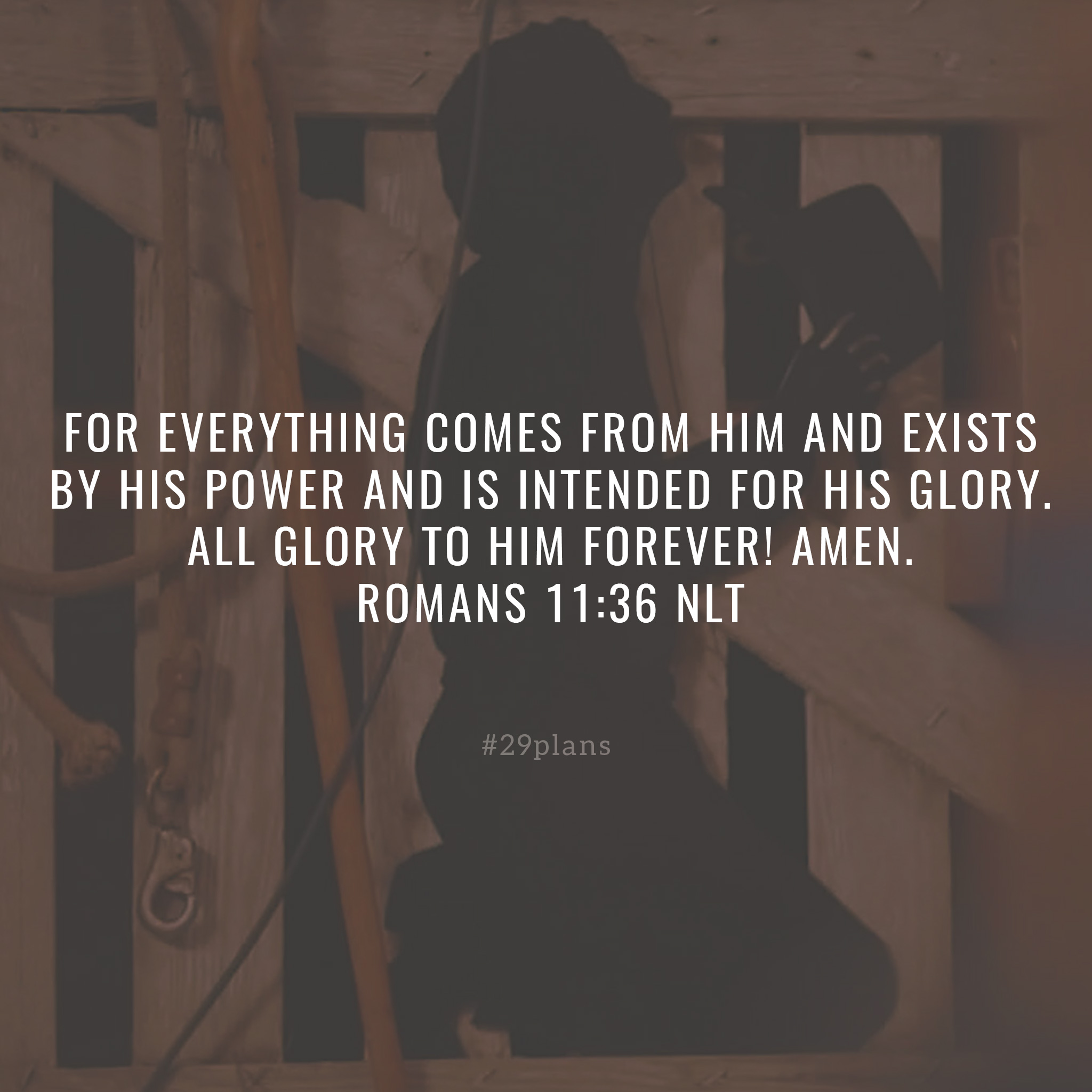 Verse of the Day: For everything comes from him and exists by his power and is intended for his glory. All glory to him forever! Amen. Romans 11:36 NLT

Song of the Day: Romans Doxology by Andrew Peterson — Youtube

The Philistines Return the Ark

1 The Ark of the Lord remained in Philistine territory seven months in all. 2 Then the Philistines called in their priests and diviners and asked them, “What should we do about the Ark of the Lord? Tell us how to return it to its own country.”

3 “Send the Ark of the God of Israel back with a gift,” they were told. “Send a guilt offering so the plague will stop. Then, if you are healed, you will know it was his hand that caused the plague.”

4 “What sort of guilt offering should we send?” they asked.

And they were told, “Since the plague has struck both you and your five rulers, make five gold tumors and five gold rats, just like those that have ravaged your land. 5 Make these things to show honor to the God of Israel. Perhaps then he will stop afflicting you, your gods, and your land. 6 Don’t be stubborn and rebellious as Pharaoh and the Egyptians were. By the time God was finished with them, they were eager to let Israel go.

7 “Now build a new cart, and find two cows that have just given birth to calves. Make sure the cows have never been yoked to a cart. Hitch the cows to the cart, but shut their calves away from them in a pen. 8 Put the Ark of the Lord on the cart, and beside it place a chest containing the gold rats and gold tumors you are sending as a guilt offering. Then let the cows go wherever they want. 9 If they cross the border of our land and go to Beth-shemesh, we will know it was the Lord who brought this great disaster upon us. If they don’t, we will know it was not his hand that caused the plague. It came simply by chance.”

10 So these instructions were carried out. Two cows were hitched to the cart, and their newborn calves were shut up in a pen. 11 Then the Ark of the Lord and the chest containing the gold rats and gold tumors were placed on the cart. 12 And sure enough, without veering off in other directions, the cows went straight along the road toward Beth-shemesh, lowing as they went. The Philistine rulers followed them as far as the border of Beth-shemesh.

13 The people of Beth-shemesh were harvesting wheat in the valley, and when they saw the Ark, they were overjoyed! 14 The cart came into the field of a man named Joshua and stopped beside a large rock. So the people broke up the wood of the cart for a fire and killed the cows and sacrificed them to the Lord as a burnt offering. 15 Several men of the tribe of Levi lifted the Ark of the Lord and the chest containing the gold rats and gold tumors from the cart and placed them on the large rock. Many sacrifices and burnt offerings were offered to the Lord that day by the people of Beth-shemesh. 16 The five Philistine rulers watched all this and then returned to Ekron that same day.

17 The five gold tumors sent by the Philistines as a guilt offering to the Lord were gifts from the rulers of Ashdod, Gaza, Ashkelon, Gath, and Ekron. 18 The five gold rats represented the five Philistine towns and their surrounding villages, which were controlled by the five rulers. The large rock at Beth-shemesh, where they set the Ark of the Lord, still stands in the field of Joshua as a witness to what happened there.

The Ark Moved to Kiriath-Jearim

19 But the Lord killed seventy men[a] from Beth-shemesh because they looked into the Ark of the Lord. And the people mourned greatly because of what the Lord had done. 20 “Who is able to stand in the presence of the Lord, this holy God?” they cried out. “Where can we send the Ark from here?”

21 So they sent messengers to the people at Kiriath-jearim and told them, “The Philistines have returned the Ark of the Lord. Come here and get it!”
–
Footnotes:

13 I am saying all this especially for you Gentiles. God has appointed me as the apostle to the Gentiles. I stress this, 14 for I want somehow to make the people of Israel jealous of what you Gentiles have, so I might save some of them. 15 For since their rejection meant that God offered salvation to the rest of the world, their acceptance will be even more wonderful. It will be life for those who were dead! 16 And since Abraham and the other patriarchs were holy, their descendants will also be holy—just as the entire batch of dough is holy because the portion given as an offering is holy. For if the roots of the tree are holy, the branches will be, too.

17 But some of these branches from Abraham’s tree—some of the people of Israel—have been broken off. And you Gentiles, who were branches from a wild olive tree, have been grafted in. So now you also receive the blessing God has promised Abraham and his children, sharing in the rich nourishment from the root of God’s special olive tree. 18 But you must not brag about being grafted in to replace the branches that were broken off. You are just a branch, not the root.

19 “Well,” you may say, “those branches were broken off to make room for me.” 20 Yes, but remember—those branches were broken off because they didn’t believe in Christ, and you are there because you do believe. So don’t think highly of yourself, but fear what could happen. 21 For if God did not spare the original branches, he won’t[a] spare you either.

22 Notice how God is both kind and severe. He is severe toward those who disobeyed, but kind to you if you continue to trust in his kindness. But if you stop trusting, you also will be cut off. 23 And if the people of Israel turn from their unbelief, they will be grafted in again, for God has the power to graft them back into the tree. 24 You, by nature, were a branch cut from a wild olive tree. So if God was willing to do something contrary to nature by grafting you into his cultivated tree, he will be far more eager to graft the original branches back into the tree where they belong.

God’s Mercy Is for Everyone

25 I want you to understand this mystery, dear brothers and sisters,[b] so that you will not feel proud about yourselves. Some of the people of Israel have hard hearts, but this will last only until the full number of Gentiles comes to Christ. 26 And so all Israel will be saved. As the Scriptures say,

“The one who rescues will come from Jerusalem,[c] and he will turn Israel[d] away from ungodliness.
27 And this is my covenant with them,
that I will take away their sins.”[e] 28 Many of the people of Israel are now enemies of the Good News, and this benefits you Gentiles. Yet they are still the people he loves because he chose their ancestors Abraham, Isaac, and Jacob. 29 For God’s gifts and his call can never be withdrawn. 30 Once, you Gentiles were rebels against God, but when the people of Israel rebelled against him, God was merciful to you instead. 31 Now they are the rebels, and God’s mercy has come to you so that they, too, will share[f] in God’s mercy. 32 For God has imprisoned everyone in disobedience so he could have mercy on everyone.

33 Oh, how great are God’s riches and wisdom and knowledge! How impossible it is for us to understand his decisions and his ways!

34 For who can know the Lord’s thoughts?
Who knows enough to give him advice?[g] 35 And who has given him so much
that he needs to pay it back?[h] 36 For everything comes from him and exists by his power and is intended for his glory. All glory to him forever! Amen.
–
Footnotes: