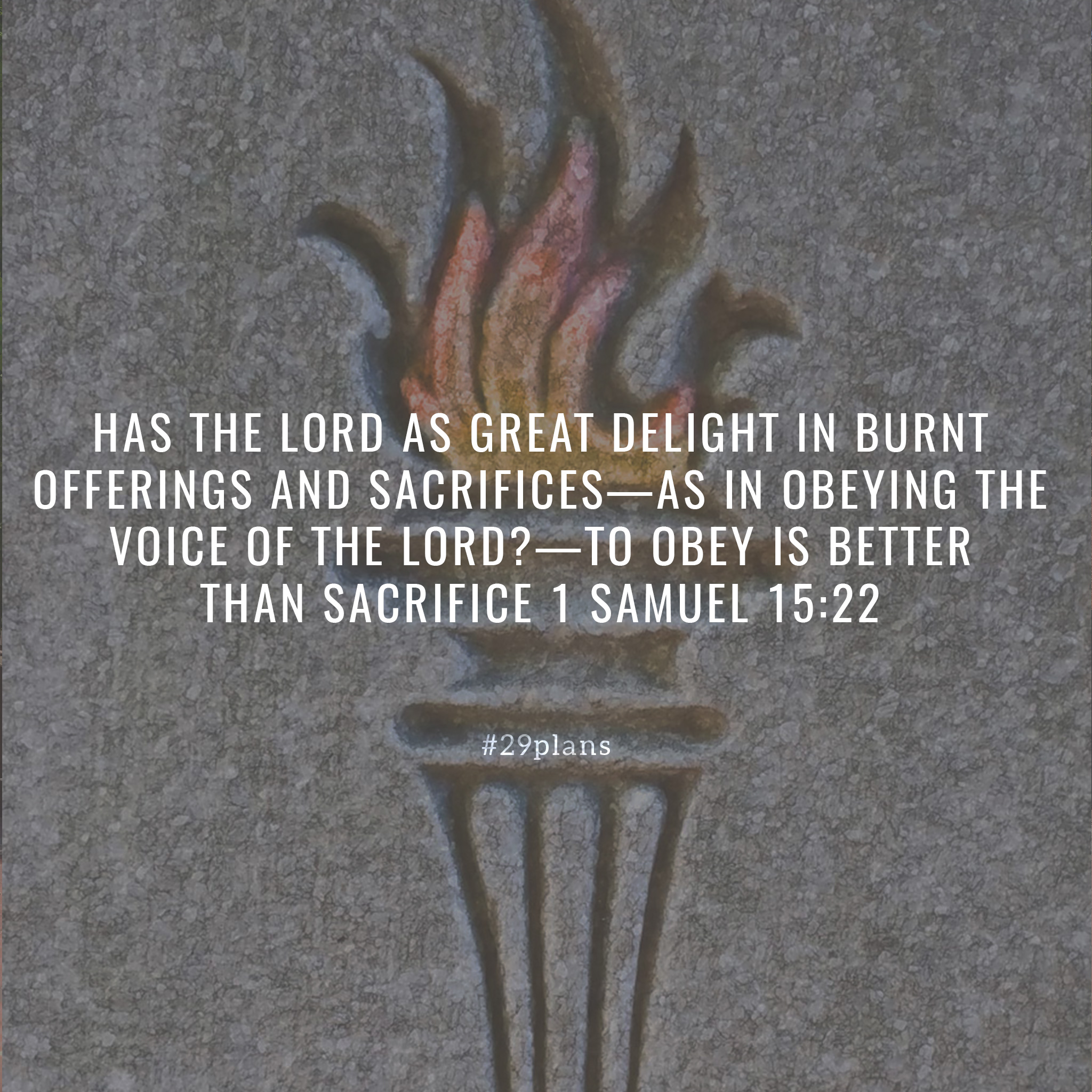 Verse of the Day: Has the Lord as great delight in burnt offerings and sacrifices—As in obeying the voice of the Lord?—to obey is better than sacrifice 1 Samuel 15:22

Song of the Day: To Obey is Better than Sacrifice by Keith Green — Youtube

Saul Spares King Agag
1 Samuel also said to Saul, “The Lord sent me to anoint you king over His people, over Israel. Now therefore, heed the voice of the words of the Lord. 2 Thus says the Lord of hosts: ‘I will punish Amalek for what he did to Israel, how he ambushed him on the way when he came up from Egypt. 3 Now go and attack Amalek, and utterly destroy all that they have, and do not spare them. But kill both man and woman, infant and nursing child, ox and sheep, camel and donkey.’”

4 So Saul gathered the people together and numbered them in Telaim, two hundred thousand foot soldiers and ten thousand men of Judah. 5 And Saul came to a city of Amalek, and lay in wait in the valley.

Saul Rejected as King
10 Now the word of the Lord came to Samuel, saying, 11 “I greatly regret that I have set up Saul as king, for he has turned back from following Me, and has not performed My commandments.” And it grieved Samuel, and he cried out to the Lord all night. 12 So when Samuel rose early in the morning to meet Saul, it was told Samuel, saying, “Saul went to Carmel, and indeed, he set up a monument for himself; and he has gone on around, passed by, and gone down to Gilgal.” 13 Then Samuel went to Saul, and Saul said to him, “Blessed are you of the Lord! I have performed the commandment of the Lord.”

14 But Samuel said, “What then is this bleating of the sheep in my ears, and the lowing of the oxen which I hear?”

15 And Saul said, “They have brought them from the Amalekites; for the people spared the best of the sheep and the oxen, to sacrifice to the Lord your God; and the rest we have utterly destroyed.”

16 Then Samuel said to Saul, “Be quiet! And I will tell you what the Lord said to me last night.”

17 So Samuel said, “When you were little in your own eyes, were you not head of the tribes of Israel? And did not the Lord anoint you king over Israel? 18 Now the Lord sent you on a mission, and said, ‘Go, and utterly destroy the sinners, the Amalekites, and fight against them until they are consumed.’ 19 Why then did you not obey the voice of the Lord? Why did you swoop down on the spoil, and do evil in the sight of the Lord?”

20 And Saul said to Samuel, “But I have obeyed the voice of the Lord, and gone on the mission on which the Lord sent me, and brought back Agag king of Amalek; I have utterly destroyed the Amalekites. 21 But the people took of the plunder, sheep and oxen, the best of the things which should have been utterly destroyed, to sacrifice to the Lord your God in Gilgal.”

“Has the Lord as great delight in burnt offerings and sacrifices,
As in obeying the voice of the Lord?
Behold, to obey is better than sacrifice,
And to heed than the fat of rams.
23 For rebellion is as the sin of witchcraft,
And stubbornness is as iniquity and idolatry.
Because you have rejected the word of the Lord,
He also has rejected you from being king.”
24 Then Saul said to Samuel, “I have sinned, for I have transgressed the commandment of the Lord and your words, because I feared the people and obeyed their voice. 25 Now therefore, please pardon my sin, and return with me, that I may worship the Lord.”

26 But Samuel said to Saul, “I will not return with you, for you have rejected the word of the Lord, and the Lord has rejected you from being king over Israel.”

27 And as Samuel turned around to go away, Saul seized the edge of his robe, and it tore. 28 So Samuel said to him, “The Lord has torn the kingdom of Israel from you today, and has given it to a neighbor of yours, who is better than you. 29 And also the Strength of Israel will not lie nor relent. For He is not a man, that He should relent.”

30 Then he said, “I have sinned; yet honor me now, please, before the elders of my people and before Israel, and return with me, that I may worship the Lord your God.” 31 So Samuel turned back after Saul, and Saul worshiped the Lord.

32 Then Samuel said, “Bring Agag king of the Amalekites here to me.” So Agag came to him cautiously.

And Agag said, “Surely the bitterness of death is past.”

33 But Samuel said, “As your sword has made women childless, so shall your mother be childless among women.” And Samuel hacked Agag in pieces before the Lord in Gilgal.

34 Then Samuel went to Ramah, and Saul went up to his house at Gibeah of Saul. 35 And Samuel went no more to see Saul until the day of his death. Nevertheless Samuel mourned for Saul, and the Lord regretted that He had made Saul king over Israel.

Paul Before Agrippa
13 And after some days King Agrippa and Bernice came to Caesarea to greet Festus. 14 When they had been there many days, Festus laid Paul’s case before the king, saying: “There is a certain man left a prisoner by Felix, 15 about whom the chief priests and the elders of the Jews informed me, when I was in Jerusalem, asking for a judgment against him. 16 To them I answered, ‘It is not the custom of the Romans to deliver any man to destruction[a] before the accused meets the accusers face to face, and has opportunity to answer for himself concerning the charge against him.’ 17 Therefore when they had come together, without any delay, the next day I sat on the judgment seat and commanded the man to be brought in. 18 When the accusers stood up, they brought no accusation against him of such things as I supposed, 19 but had some questions against him about their own religion and about a certain Jesus, who had died, whom Paul affirmed to be alive. 20 And because I was uncertain of such questions, I asked whether he was willing to go to Jerusalem and there be judged concerning these matters. 21 But when Paul appealed to be reserved for the decision of Augustus, I commanded him to be kept till I could send him to Caesar.”

22 Then Agrippa said to Festus, “I also would like to hear the man myself.”

23 So the next day, when Agrippa and Bernice had come with great pomp, and had entered the auditorium with the commanders and the prominent men of the city, at Festus’ command Paul was brought in. 24 And Festus said: “King Agrippa and all the men who are here present with us, you see this man about whom the whole assembly of the Jews petitioned me, both at Jerusalem and here, crying out that he was not fit to live any longer. 25 But when I found that he had committed nothing deserving of death, and that he himself had appealed to Augustus, I decided to send him. 26 I have nothing certain to write to my lord concerning him. Therefore I have brought him out before you, and especially before you, King Agrippa, so that after the examination has taken place I may have something to write. 27 For it seems to me unreasonable to send a prisoner and not to specify the charges against him.”
–
Footnotes:

Acts 25:16 NU-Text omits to destruction, although it is implied.