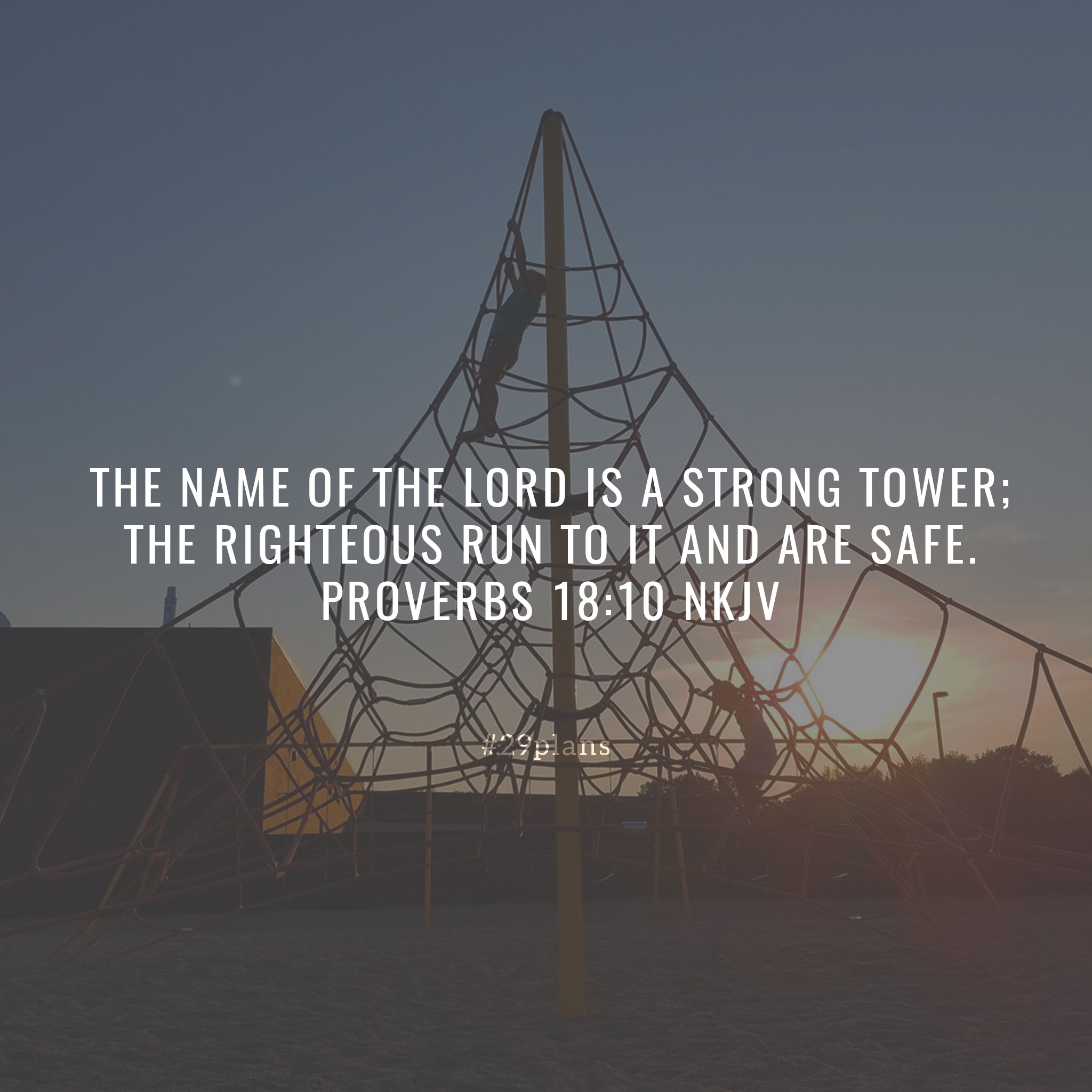 Verse of the Day: The name of the Lord is a strong tower; The righteous run to it and are safe. Proverbs 18:10 NKJV

Song of the Day: Strong Tower by Kutless – Youtube

1 A man who isolates himself seeks his own desire;
He rages against all wise judgment.
2 A fool has no delight in understanding,
But in expressing his own heart.
3 When the wicked comes, contempt comes also;
And with dishonor comes reproach.
4 The words of a man’s mouth are deep waters;
The wellspring of wisdom is a flowing brook.
5 It is not good to show partiality to the wicked,
Or to overthrow the righteous in judgment.
6 A fool’s lips enter into contention,
And his mouth calls for blows.
7 A fool’s mouth is his destruction,
And his lips are the snare of his soul.
8 The words of a talebearer are like tasty trifles,[a] And they go down into the inmost body.
9 He who is slothful in his work
Is a brother to him who is a great destroyer.
10 The name of the Lord is a strong tower;
The righteous run to it and are safe.
11 The rich man’s wealth is his strong city,
And like a high wall in his own esteem.
12 Before destruction the heart of a man is haughty,
And before honor is humility.
13 He who answers a matter before he hears it,
It is folly and shame to him.
14 The spirit of a man will sustain him in sickness,
But who can bear a broken spirit?
15 The heart of the prudent acquires knowledge,
And the ear of the wise seeks knowledge.
16 A man’s gift makes room for him,
And brings him before great men.
17 The first one to plead his cause seems right,
Until his neighbor comes and examines him.
18 Casting lots causes contentions to cease,
And keeps the mighty apart.
19 A brother offended is harder to win than a strong city,
And contentions are like the bars of a castle.
20 A man’s stomach shall be satisfied from the fruit of his mouth;
From the produce of his lips he shall be filled.
21 Death and life are in the power of the tongue,
And those who love it will eat its fruit.
22 He who finds a wife finds a good thing,
And obtains favor from the Lord.
23 The poor man uses entreaties,
But the rich answers roughly.
24 A man who has friends must himself be friendly,[b] But there is a friend who sticks closer than a brother.
–
Footnotes:

Paul’s Ministry at Rome
17 And it came to pass after three days that Paul called the leaders of the Jews together. So when they had come together, he said to them: “Men and brethren, though I have done nothing against our people or the customs of our fathers, yet I was delivered as a prisoner from Jerusalem into the hands of the Romans, 18 who, when they had examined me, wanted to let me go, because there was no cause for putting me to death. 19 But when the Jews[a] spoke against it, I was compelled to appeal to Caesar, not that I had anything of which to accuse my nation. 20 For this reason therefore I have called for you, to see you and speak with you, because for the hope of Israel I am bound with this chain.”

21 Then they said to him, “We neither received letters from Judea concerning you, nor have any of the brethren who came reported or spoken any evil of you. 22 But we desire to hear from you what you think; for concerning this sect, we know that it is spoken against everywhere.”

23 So when they had appointed him a day, many came to him at his lodging, to whom he explained and solemnly testified of the kingdom of God, persuading them concerning Jesus from both the Law of Moses and the Prophets, from morning till evening. 24 And some were persuaded by the things which were spoken, and some disbelieved. 25 So when they did not agree among themselves, they departed after Paul had said one word: “The Holy Spirit spoke rightly through Isaiah the prophet to our[b] fathers, 26 saying,

‘Go to this people and say:
“Hearing you will hear, and shall not understand;
And seeing you will see, and not perceive;
27 For the hearts of this people have grown dull.
Their ears are hard of hearing,
And their eyes they have closed,
Lest they should see with their eyes and hear with their ears,
Lest they should understand with their hearts and turn,
So that I should heal them.”’[c] 28 “Therefore let it be known to you that the salvation of God has been sent to the Gentiles, and they will hear it!” 29 And when he had said these words, the Jews departed and had a great dispute among themselves.[d]

30 Then Paul dwelt two whole years in his own rented house, and received all who came to him,
–
Footnotes: