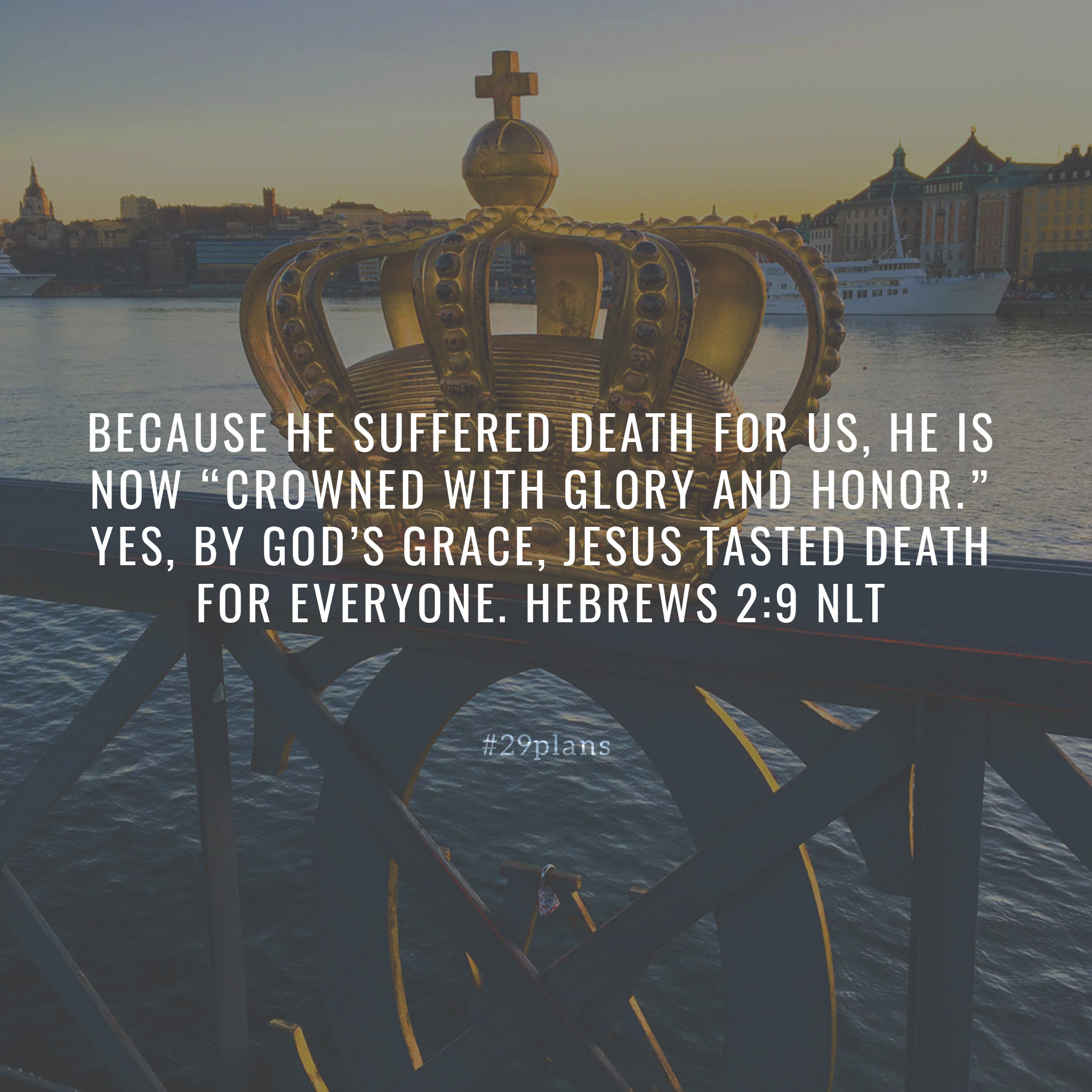 Guide: Read 2 Samuel 9; Hebrews 2; Listen to We Crown You by @elmercanasjr; Pray for people without family; Commit a random act of kindness

Verse of the Day: Because he suffered death for us, he is now “crowned with glory and honor.” Yes, by God’s grace, Jesus tasted death for everyone. Hebrews 2:9 NLT

Song of the Day: We Crown You by Elmer Canas Jr — Youtube

David’s Kindness to Mephibosheth
1 One day David asked, “Is anyone in Saul’s family still alive—anyone to whom I can show kindness for Jonathan’s sake?” 2 He summoned a man named Ziba, who had been one of Saul’s servants. “Are you Ziba?” the king asked.

3 The king then asked him, “Is anyone still alive from Saul’s family? If so, I want to show God’s kindness to them.”

Ziba replied, “Yes, one of Jonathan’s sons is still alive. He is crippled in both feet.”

“In Lo-debar,” Ziba told him, “at the home of Makir son of Ammiel.”

5 So David sent for him and brought him from Makir’s home. 6 His name was Mephibosheth[a]; he was Jonathan’s son and Saul’s grandson. When he came to David, he bowed low to the ground in deep respect. David said, “Greetings, Mephibosheth.”

Mephibosheth replied, “I am your servant.”

7 “Don’t be afraid!” David said. “I intend to show kindness to you because of my promise to your father, Jonathan. I will give you all the property that once belonged to your grandfather Saul, and you will eat here with me at the king’s table!”

8 Mephibosheth bowed respectfully and exclaimed, “Who is your servant, that you should show such kindness to a dead dog like me?”

11 Ziba replied, “Yes, my lord the king; I am your servant, and I will do all that you have commanded.” And from that time on, Mephibosheth ate regularly at David’s table,[c] like one of the king’s own sons.

12 Mephibosheth had a young son named Mica. From then on, all the members of Ziba’s household were Mephibosheth’s servants. 13 And Mephibosheth, who was crippled in both feet, lived in Jerusalem and ate regularly at the king’s table.
–
Footnotes:

A Warning against Drifting Away
1 So we must listen very carefully to the truth we have heard, or we may drift away from it. 2 For the message God delivered through angels has always stood firm, and every violation of the law and every act of disobedience was punished. 3 So what makes us think we can escape if we ignore this great salvation that was first announced by the Lord Jesus himself and then delivered to us by those who heard him speak? 4 And God confirmed the message by giving signs and wonders and various miracles and gifts of the Holy Spirit whenever he chose.

Jesus, the Man
5 And furthermore, it is not angels who will control the future world we are talking about. 6 For in one place the Scriptures say,

“What are mere mortals that you should think about them,
or a son of man[a] that you should care for him?
7 Yet you made them only a little lower than the angels
and crowned them with glory and honor.[b] 8 You gave them authority over all things.”[c] Now when it says “all things,” it means nothing is left out. But we have not yet seen all things put under their authority. 9 What we do see is Jesus, who was given a position “a little lower than the angels”; and because he suffered death for us, he is now “crowned with glory and honor.” Yes, by God’s grace, Jesus tasted death for everyone. 10 God, for whom and through whom everything was made, chose to bring many children into glory. And it was only right that he should make Jesus, through his suffering, a perfect leader, fit to bring them into their salvation.

11 So now Jesus and the ones he makes holy have the same Father. That is why Jesus is not ashamed to call them his brothers and sisters.[d] 12 For he said to God,

“I will proclaim your name to my brothers and sisters.
I will praise you among your assembled people.”[e] 13 He also said,

“I will put my trust in him,”
that is, “I and the children God has given me.”[f] 14 Because God’s children are human beings—made of flesh and blood—the Son also became flesh and blood. For only as a human being could he die, and only by dying could he break the power of the devil, who had[g] the power of death. 15 Only in this way could he set free all who have lived their lives as slaves to the fear of dying.

16 We also know that the Son did not come to help angels; he came to help the descendants of Abraham. 17 Therefore, it was necessary for him to be made in every respect like us, his brothers and sisters,[h] so that he could be our merciful and faithful High Priest before God. Then he could offer a sacrifice that would take away the sins of the people. 18 Since he himself has gone through suffering and testing, he is able to help us when we are being tested.
–
Footnotes: