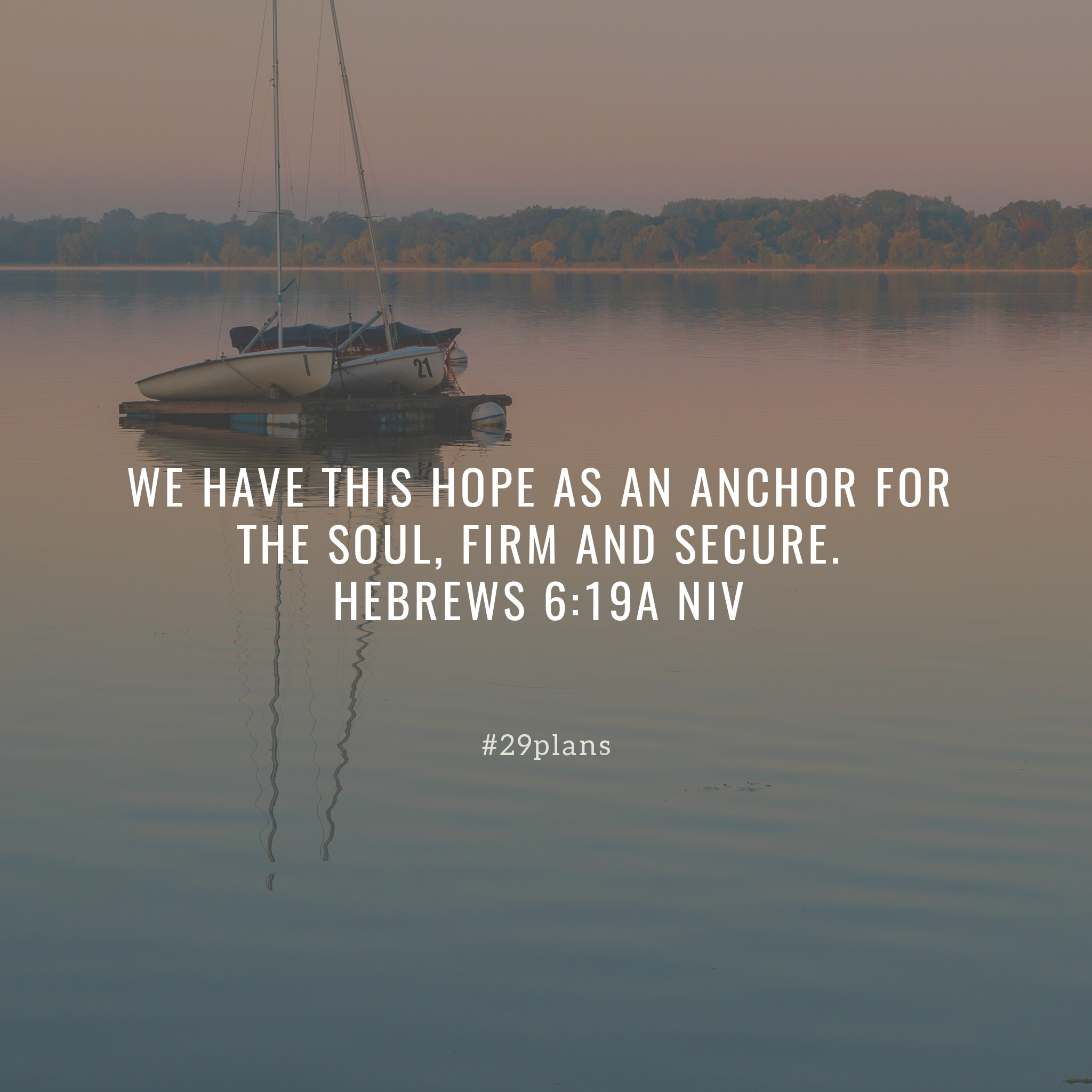 Verse of the Day: We have this hope as an anchor for the soul, firm and secure. Hebrews 6:19a NIV

Song of the Day: Anchor by Satellites and Sirens — Youtube

Nathan Rebukes David
1 The Lord sent Nathan to David. When he came to him, he said, “There were two men in a certain town, one rich and the other poor. 2 The rich man had a very large number of sheep and cattle, 3 but the poor man had nothing except one little ewe lamb he had bought. He raised it, and it grew up with him and his children. It shared his food, drank from his cup and even slept in his arms. It was like a daughter to him.

5 David burned with anger against the man and said to Nathan, “As surely as the Lord lives, the man who did this must die! 6 He must pay for that lamb four times over, because he did such a thing and had no pity.”

7 Then Nathan said to David, “You are the man! This is what the Lord, the God of Israel, says: ‘I anointed you king over Israel, and I delivered you from the hand of Saul. 8 I gave your master’s house to you, and your master’s wives into your arms. I gave you all Israel and Judah. And if all this had been too little, I would have given you even more. 9 Why did you despise the word of the Lord by doing what is evil in his eyes? You struck down Uriah the Hittite with the sword and took his wife to be your own. You killed him with the sword of the Ammonites. 10 Now, therefore, the sword will never depart from your house, because you despised me and took the wife of Uriah the Hittite to be your own.’

11 “This is what the Lord says: ‘Out of your own household I am going to bring calamity on you. Before your very eyes I will take your wives and give them to one who is close to you, and he will sleep with your wives in broad daylight. 12 You did it in secret, but I will do this thing in broad daylight before all Israel.’”

13 Then David said to Nathan, “I have sinned against the Lord.”

Nathan replied, “The Lord has taken away your sin. You are not going to die. 14 But because by doing this you have shown utter contempt for[a] the Lord, the son born to you will die.”

15 After Nathan had gone home, the Lord struck the child that Uriah’s wife had borne to David, and he became ill. 16 David pleaded with God for the child. He fasted and spent the nights lying in sackcloth[b] on the ground. 17 The elders of his household stood beside him to get him up from the ground, but he refused, and he would not eat any food with them.

18 On the seventh day the child died. David’s attendants were afraid to tell him that the child was dead, for they thought, “While the child was still living, he wouldn’t listen to us when we spoke to him. How can we now tell him the child is dead? He may do something desperate.”

19 David noticed that his attendants were whispering among themselves, and he realized the child was dead. “Is the child dead?” he asked.

20 Then David got up from the ground. After he had washed, put on lotions and changed his clothes, he went into the house of the Lord and worshiped. Then he went to his own house, and at his request they served him food, and he ate.

21 His attendants asked him, “Why are you acting this way? While the child was alive, you fasted and wept, but now that the child is dead, you get up and eat!”

22 He answered, “While the child was still alive, I fasted and wept. I thought, ‘Who knows? The Lord may be gracious to me and let the child live.’ 23 But now that he is dead, why should I go on fasting? Can I bring him back again? I will go to him, but he will not return to me.”

24 Then David comforted his wife Bathsheba, and he went to her and made love to her. She gave birth to a son, and they named him Solomon. The Lord loved him; 25 and because the Lord loved him, he sent word through Nathan the prophet to name him Jedidiah.[c]

29 So David mustered the entire army and went to Rabbah, and attacked and captured it. 30 David took the crown from their king’s[d] head, and it was placed on his own head. It weighed a talent[e] of gold, and it was set with precious stones. David took a great quantity of plunder from the city 31 and brought out the people who were there, consigning them to labor with saws and with iron picks and axes, and he made them work at brickmaking.[f] David did this to all the Ammonite towns. Then he and his entire army returned to Jerusalem.
–
Footnotes:

1 Therefore let us move beyond the elementary teachings about Christ and be taken forward to maturity, not laying again the foundation of repentance from acts that lead to death,[a] and of faith in God, 2 instruction about cleansing rites,[b] the laying on of hands, the resurrection of the dead, and eternal judgment. 3 And God permitting, we will do so.

4 It is impossible for those who have once been enlightened, who have tasted the heavenly gift, who have shared in the Holy Spirit, 5 who have tasted the goodness of the word of God and the powers of the coming age 6 and who have fallen[c] away, to be brought back to repentance. To their loss they are crucifying the Son of God all over again and subjecting him to public disgrace. 7 Land that drinks in the rain often falling on it and that produces a crop useful to those for whom it is farmed receives the blessing of God. 8 But land that produces thorns and thistles is worthless and is in danger of being cursed. In the end it will be burned.

9 Even though we speak like this, dear friends, we are convinced of better things in your case—the things that have to do with salvation. 10 God is not unjust; he will not forget your work and the love you have shown him as you have helped his people and continue to help them. 11 We want each of you to show this same diligence to the very end, so that what you hope for may be fully realized. 12 We do not want you to become lazy, but to imitate those who through faith and patience inherit what has been promised.

The Certainty of God’s Promise
13 When God made his promise to Abraham, since there was no one greater for him to swear by, he swore by himself, 14 saying, “I will surely bless you and give you many descendants.”[d] 15 And so after waiting patiently, Abraham received what was promised.

16 People swear by someone greater than themselves, and the oath confirms what is said and puts an end to all argument. 17 Because God wanted to make the unchanging nature of his purpose very clear to the heirs of what was promised, he confirmed it with an oath. 18 God did this so that, by two unchangeable things in which it is impossible for God to lie, we who have fled to take hold of the hope set before us may be greatly encouraged. 19 We have this hope as an anchor for the soul, firm and secure. It enters the inner sanctuary behind the curtain, 20 where our forerunner, Jesus, has entered on our behalf. He has become a high priest forever, in the order of Melchizedek.
–
Footnotes: