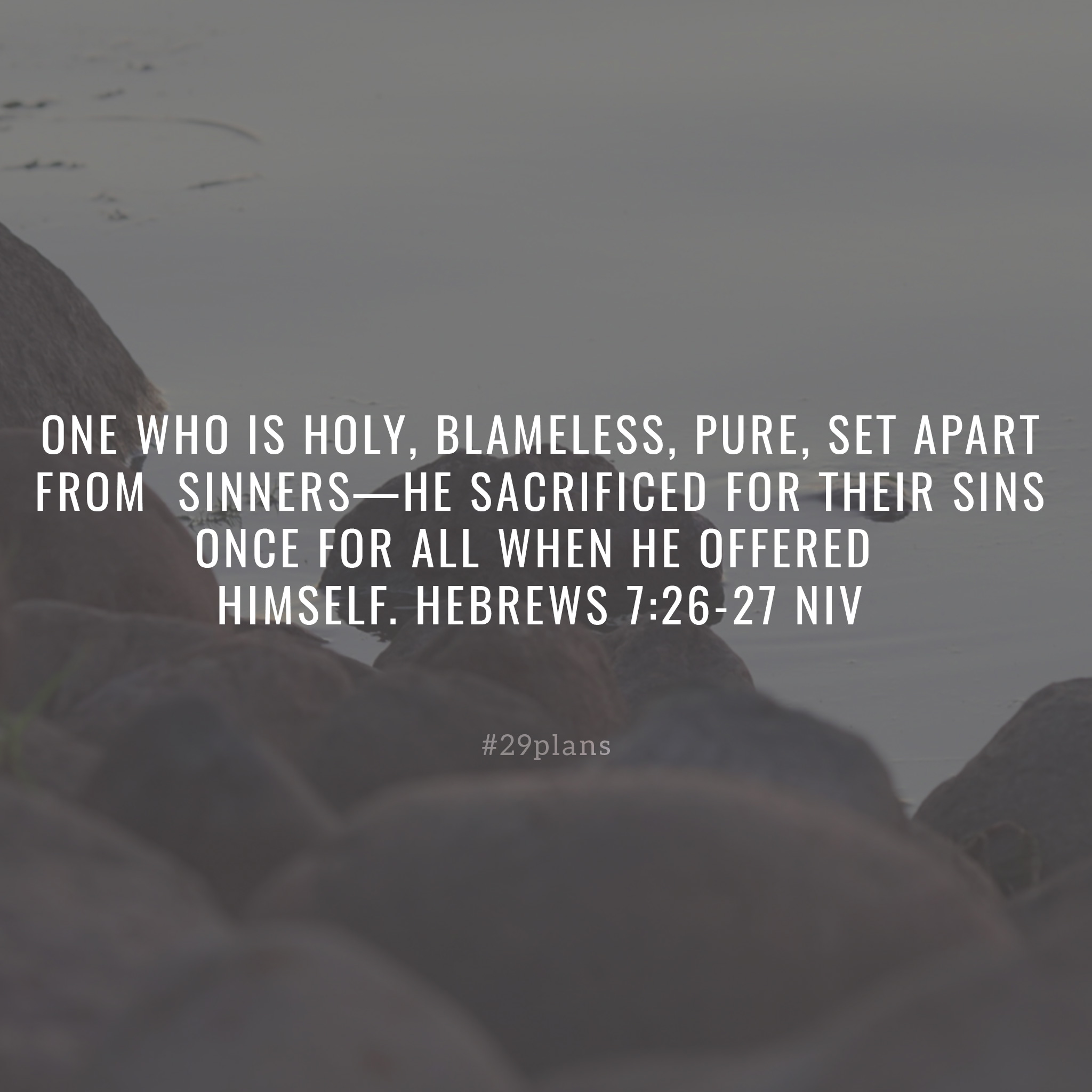 Verse of the Day: One who is holy, blameless, pure, set apart from sinners—He sacrificed for their sins once for all when he offered himself. Hebrews 7:26-27 NIV

Song of the Day: Once and for All by Disciple — Youtube

David and Ziba
1 When David had gone a short distance beyond the summit, there was Ziba, the steward of Mephibosheth, waiting to meet him. He had a string of donkeys saddled and loaded with two hundred loaves of bread, a hundred cakes of raisins, a hundred cakes of figs and a skin of wine.

2 The king asked Ziba, “Why have you brought these?”

Ziba answered, “The donkeys are for the king’s household to ride on, the bread and fruit are for the men to eat, and the wine is to refresh those who become exhausted in the wilderness.”

3 The king then asked, “Where is your master’s grandson?”

Ziba said to him, “He is staying in Jerusalem, because he thinks, ‘Today the Israelites will restore to me my grandfather’s kingdom.’”

4 Then the king said to Ziba, “All that belonged to Mephibosheth is now yours.”

“I humbly bow,” Ziba said. “May I find favor in your eyes, my lord the king.”

Shimei Curses David
5 As King David approached Bahurim, a man from the same clan as Saul’s family came out from there. His name was Shimei son of Gera, and he cursed as he came out. 6 He pelted David and all the king’s officials with stones, though all the troops and the special guard were on David’s right and left. 7 As he cursed, Shimei said, “Get out, get out, you murderer, you scoundrel! 8 The Lord has repaid you for all the blood you shed in the household of Saul, in whose place you have reigned. The Lord has given the kingdom into the hands of your son Absalom. You have come to ruin because you are a murderer!”

9 Then Abishai son of Zeruiah said to the king, “Why should this dead dog curse my lord the king? Let me go over and cut off his head.”

10 But the king said, “What does this have to do with you, you sons of Zeruiah? If he is cursing because the Lord said to him, ‘Curse David,’ who can ask, ‘Why do you do this?’”

11 David then said to Abishai and all his officials, “My son, my own flesh and blood, is trying to kill me. How much more, then, this Benjamite! Leave him alone; let him curse, for the Lord has told him to. 12 It may be that the Lord will look upon my misery and restore to me his covenant blessing instead of his curse today.”

13 So David and his men continued along the road while Shimei was going along the hillside opposite him, cursing as he went and throwing stones at him and showering him with dirt. 14 The king and all the people with him arrived at their destination exhausted. And there he refreshed himself.

17 Absalom said to Hushai, “So this is the love you show your friend? If he’s your friend, why didn’t you go with him?”

18 Hushai said to Absalom, “No, the one chosen by the Lord, by these people, and by all the men of Israel—his I will be, and I will remain with him. 19 Furthermore, whom should I serve? Should I not serve the son? Just as I served your father, so I will serve you.”

20 Absalom said to Ahithophel, “Give us your advice. What should we do?”

21 Ahithophel answered, “Sleep with your father’s concubines whom he left to take care of the palace. Then all Israel will hear that you have made yourself obnoxious to your father, and the hands of everyone with you will be more resolute.” 22 So they pitched a tent for Absalom on the roof, and he slept with his father’s concubines in the sight of all Israel.

23 Now in those days the advice Ahithophel gave was like that of one who inquires of God. That was how both David and Absalom regarded all of Ahithophel’s advice.

15 And what we have said is even more clear if another priest like Melchizedek appears, 16 one who has become a priest not on the basis of a regulation as to his ancestry but on the basis of the power of an indestructible life. 17 For it is declared:

“You are a priest forever,
in the order of Melchizedek.”[a] 18 The former regulation is set aside because it was weak and useless 19 (for the law made nothing perfect), and a better hope is introduced, by which we draw near to God.

20 And it was not without an oath! Others became priests without any oath, 21 but he became a priest with an oath when God said to him:

“The Lord has sworn
and will not change his mind:
‘You are a priest forever.’”[b] 22 Because of this oath, Jesus has become the guarantor of a better covenant.

23 Now there have been many of those priests, since death prevented them from continuing in office; 24 but because Jesus lives forever, he has a permanent priesthood. 25 Therefore he is able to save completely[c] those who come to God through him, because he always lives to intercede for them.

26 Such a high priest truly meets our need—one who is holy, blameless, pure, set apart from sinners, exalted above the heavens. 27 Unlike the other high priests, he does not need to offer sacrifices day after day, first for his own sins, and then for the sins of the people. He sacrificed for their sins once for all when he offered himself. 28 For the law appoints as high priests men in all their weakness; but the oath, which came after the law, appointed the Son, who has been made perfect forever.
–
Footnotes: