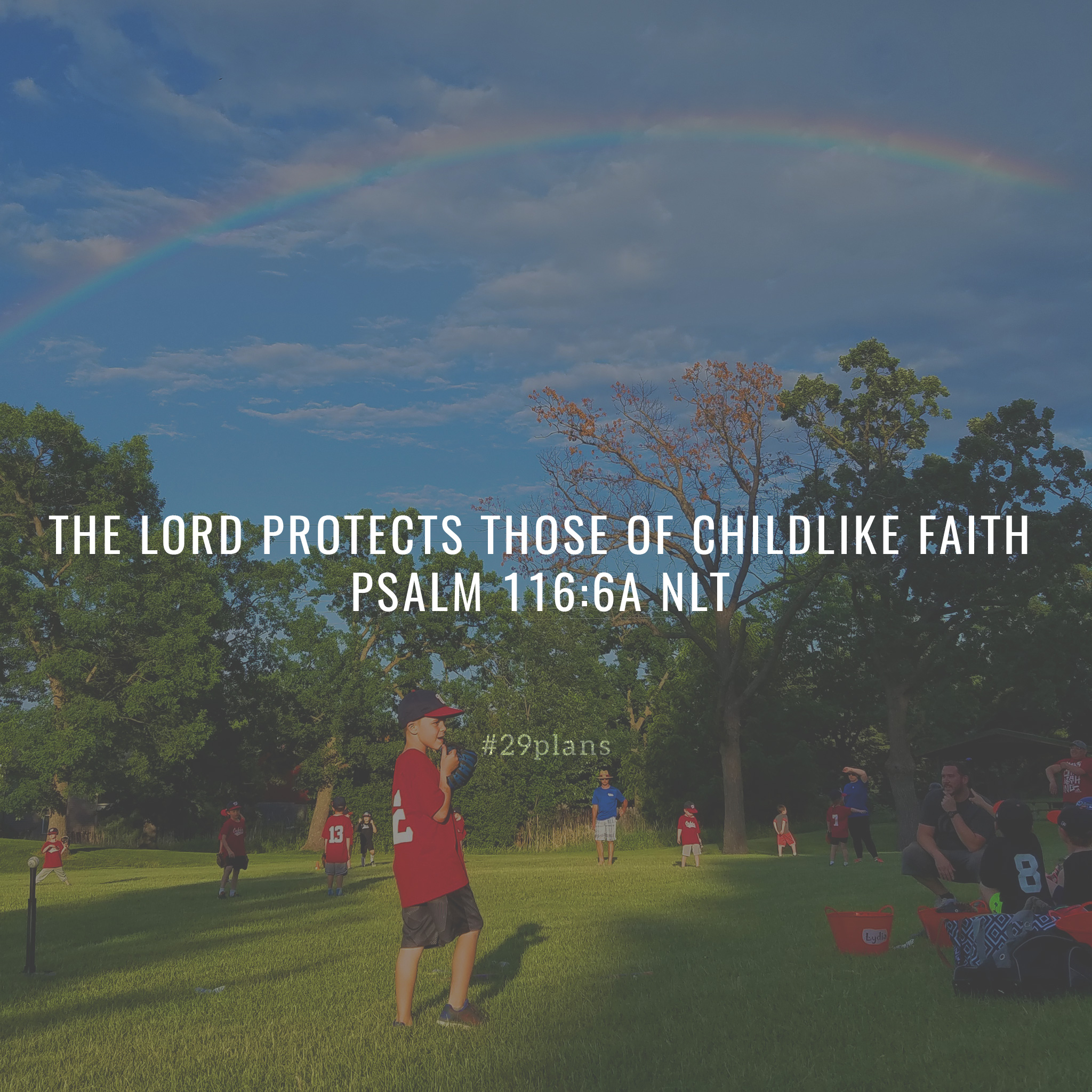 Guide: Read Psalm 116; Hebrews 9; Listen to Once and for All by @thefold; Pray for friends far from God; Give something away

Verse of the Day: The Lord protects those of childlike faith Psalm 116:6a NLT

Song of the Day: Once and For All by The Fold — Youtube

1 I love the Lord because he hears my voice
and my prayer for mercy.
2 Because he bends down to listen,
I will pray as long as I have breath!
3 Death wrapped its ropes around me;
the terrors of the grave[a] overtook me.
I saw only trouble and sorrow.
4 Then I called on the name of the Lord:
“Please, Lord, save me!”
5 How kind the Lord is! How good he is!
So merciful, this God of ours!
6 The Lord protects those of childlike faith;
I was facing death, and he saved me.
7 Let my soul be at rest again,
for the Lord has been good to me.
8 He has saved me from death,
my eyes from tears,
my feet from stumbling.
9 And so I walk in the Lord’s presence
as I live here on earth!
10 I believed in you, so I said,
“I am deeply troubled, Lord.”
11 In my anxiety I cried out to you,
“These people are all liars!”
12 What can I offer the Lord
for all he has done for me?
13 I will lift up the cup of salvation
and praise the Lord’s name for saving me.
14 I will keep my promises to the Lord
in the presence of all his people.
15 The Lord cares deeply
when his loved ones die.
16 O Lord, I am your servant;
yes, I am your servant, born into your household;
you have freed me from my chains.
17 I will offer you a sacrifice of thanksgiving
and call on the name of the Lord.
18 I will fulfill my vows to the Lord
in the presence of all his people—
19 in the house of the Lord
in the heart of Jerusalem.
Praise the Lord!
–
Footnotes:

Old Rules about Worship
1 That first covenant between God and Israel had regulations for worship and a place of worship here on earth. 2 There were two rooms in that Tabernacle.[a] In the first room were a lampstand, a table, and sacred loaves of bread on the table. This room was called the Holy Place. 3 Then there was a curtain, and behind the curtain was the second room[b] called the Most Holy Place. 4 In that room were a gold incense altar and a wooden chest called the Ark of the Covenant, which was covered with gold on all sides. Inside the Ark were a gold jar containing manna, Aaron’s staff that sprouted leaves, and the stone tablets of the covenant. 5 Above the Ark were the cherubim of divine glory, whose wings stretched out over the Ark’s cover, the place of atonement. But we cannot explain these things in detail now.

6 When these things were all in place, the priests regularly entered the first room[c] as they performed their religious duties. 7 But only the high priest ever entered the Most Holy Place, and only once a year. And he always offered blood for his own sins and for the sins the people had committed in ignorance. 8 By these regulations the Holy Spirit revealed that the entrance to the Most Holy Place was not freely open as long as the Tabernacle[d] and the system it represented were still in use.

9 This is an illustration pointing to the present time. For the gifts and sacrifices that the priests offer are not able to cleanse the consciences of the people who bring them. 10 For that old system deals only with food and drink and various cleansing ceremonies—physical regulations that were in effect only until a better system could be established.

Christ Is the Perfect Sacrifice
11 So Christ has now become the High Priest over all the good things that have come.[e] He has entered that greater, more perfect Tabernacle in heaven, which was not made by human hands and is not part of this created world. 12 With his own blood—not the blood of goats and calves—he entered the Most Holy Place once for all time and secured our redemption forever.

13 Under the old system, the blood of goats and bulls and the ashes of a heifer could cleanse people’s bodies from ceremonial impurity. 14 Just think how much more the blood of Christ will purify our consciences from sinful deeds[f] so that we can worship the living God. For by the power of the eternal Spirit, Christ offered himself to God as a perfect sacrifice for our sins. 15 That is why he is the one who mediates a new covenant between God and people, so that all who are called can receive the eternal inheritance God has promised them. For Christ died to set them free from the penalty of the sins they had committed under that first covenant.

18 That is why even the first covenant was put into effect with the blood of an animal. 19 For after Moses had read each of God’s commandments to all the people, he took the blood of calves and goats,[i] along with water, and sprinkled both the book of God’s law and all the people, using hyssop branches and scarlet wool. 20 Then he said, “This blood confirms the covenant God has made with you.”[j] 21 And in the same way, he sprinkled blood on the Tabernacle and on everything used for worship. 22 In fact, according to the law of Moses, nearly everything was purified with blood. For without the shedding of blood, there is no forgiveness.

24 For Christ did not enter into a holy place made with human hands, which was only a copy of the true one in heaven. He entered into heaven itself to appear now before God on our behalf. 25 And he did not enter heaven to offer himself again and again, like the high priest here on earth who enters the Most Holy Place year after year with the blood of an animal. 26 If that had been necessary, Christ would have had to die again and again, ever since the world began. But now, once for all time, he has appeared at the end of the age[k] to remove sin by his own death as a sacrifice.

27 And just as each person is destined to die once and after that comes judgment, 28 so also Christ was offered once for all time as a sacrifice to take away the sins of many people. He will come again, not to deal with our sins, but to bring salvation to all who are eagerly waiting for him.
–
Footnotes: