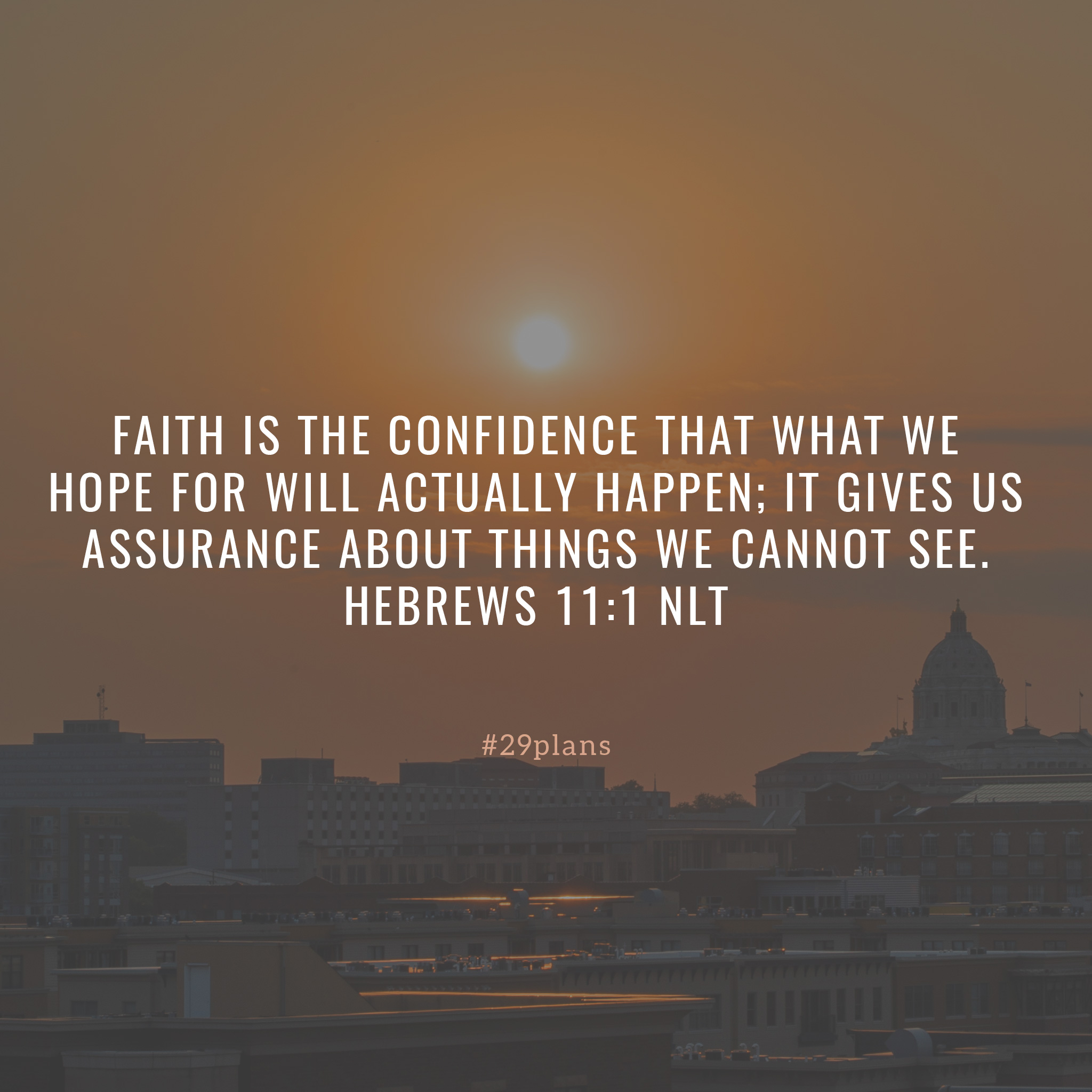 Guide: Read Proverbs 22:1-16; Hebrews 11; Listen to Faith to Believe by @shaneandshane; Pray for faith heroes; Say thanks to someone who inspires you

Verse of the Day: Faith is the confidence that what we hope for will actually happen; it gives us assurance about things we cannot see. Hebrews 11:1 NLT

Song of the Day: Faith to Believe by Shane and Shane — Youtube

1 Choose a good reputation over great riches;
being held in high esteem is better than silver or gold.
2 The rich and poor have this in common:
The Lord made them both.
3 A prudent person foresees danger and takes precautions.
The simpleton goes blindly on and suffers the consequences.
4 True humility and fear of the Lord
lead to riches, honor, and long life.
5 Corrupt people walk a thorny, treacherous road;
whoever values life will avoid it.
6 Direct your children onto the right path,
and when they are older, they will not leave it.
7 Just as the rich rule the poor,
so the borrower is servant to the lender.
8 Those who plant injustice will harvest disaster,
and their reign of terror will come to an end.[a] 9 Blessed are those who are generous,
because they feed the poor.
10 Throw out the mocker, and fighting goes, too.
Quarrels and insults will disappear.
11 Whoever loves a pure heart and gracious speech
will have the king as a friend.
12 The Lord preserves those with knowledge,
but he ruins the plans of the treacherous.
13 The lazy person claims, “There’s a lion out there!
If I go outside, I might be killed!”
14 The mouth of an immoral woman is a dangerous trap;
those who make the Lord angry will fall into it.
15 A youngster’s heart is filled with foolishness,
but physical discipline will drive it far away.
16 A person who gets ahead by oppressing the poor
or by showering gifts on the rich will end in poverty.
–
Footnotes:

Great Examples of Faith
1 Faith is the confidence that what we hope for will actually happen; it gives us assurance about things we cannot see. 2 Through their faith, the people in days of old earned a good reputation.

3 By faith we understand that the entire universe was formed at God’s command, that what we now see did not come from anything that can be seen.

4 It was by faith that Abel brought a more acceptable offering to God than Cain did. Abel’s offering gave evidence that he was a righteous man, and God showed his approval of his gifts. Although Abel is long dead, he still speaks to us by his example of faith.

5 It was by faith that Enoch was taken up to heaven without dying—“he disappeared, because God took him.”[a] For before he was taken up, he was known as a person who pleased God. 6 And it is impossible to please God without faith. Anyone who wants to come to him must believe that God exists and that he rewards those who sincerely seek him.

7 It was by faith that Noah built a large boat to save his family from the flood. He obeyed God, who warned him about things that had never happened before. By his faith Noah condemned the rest of the world, and he received the righteousness that comes by faith.

8 It was by faith that Abraham obeyed when God called him to leave home and go to another land that God would give him as his inheritance. He went without knowing where he was going. 9 And even when he reached the land God promised him, he lived there by faith—for he was like a foreigner, living in tents. And so did Isaac and Jacob, who inherited the same promise. 10 Abraham was confidently looking forward to a city with eternal foundations, a city designed and built by God.

11 It was by faith that even Sarah was able to have a child, though she was barren and was too old. She believed[b] that God would keep his promise. 12 And so a whole nation came from this one man who was as good as dead—a nation with so many people that, like the stars in the sky and the sand on the seashore, there is no way to count them.

13 All these people died still believing what God had promised them. They did not receive what was promised, but they saw it all from a distance and welcomed it. They agreed that they were foreigners and nomads here on earth. 14 Obviously people who say such things are looking forward to a country they can call their own. 15 If they had longed for the country they came from, they could have gone back. 16 But they were looking for a better place, a heavenly homeland. That is why God is not ashamed to be called their God, for he has prepared a city for them.

17 It was by faith that Abraham offered Isaac as a sacrifice when God was testing him. Abraham, who had received God’s promises, was ready to sacrifice his only son, Isaac, 18 even though God had told him, “Isaac is the son through whom your descendants will be counted.”[c] 19 Abraham reasoned that if Isaac died, God was able to bring him back to life again. And in a sense, Abraham did receive his son back from the dead.

20 It was by faith that Isaac promised blessings for the future to his sons, Jacob and Esau.

21 It was by faith that Jacob, when he was old and dying, blessed each of Joseph’s sons and bowed in worship as he leaned on his staff.

22 It was by faith that Joseph, when he was about to die, said confidently that the people of Israel would leave Egypt. He even commanded them to take his bones with them when they left.

23 It was by faith that Moses’ parents hid him for three months when he was born. They saw that God had given them an unusual child, and they were not afraid to disobey the king’s command.

24 It was by faith that Moses, when he grew up, refused to be called the son of Pharaoh’s daughter. 25 He chose to share the oppression of God’s people instead of enjoying the fleeting pleasures of sin. 26 He thought it was better to suffer for the sake of Christ than to own the treasures of Egypt, for he was looking ahead to his great reward. 27 It was by faith that Moses left the land of Egypt, not fearing the king’s anger. He kept right on going because he kept his eyes on the one who is invisible. 28 It was by faith that Moses commanded the people of Israel to keep the Passover and to sprinkle blood on the doorposts so that the angel of death would not kill their firstborn sons.

29 It was by faith that the people of Israel went right through the Red Sea as though they were on dry ground. But when the Egyptians tried to follow, they were all drowned.

30 It was by faith that the people of Israel marched around Jericho for seven days, and the walls came crashing down.

31 It was by faith that Rahab the prostitute was not destroyed with the people in her city who refused to obey God. For she had given a friendly welcome to the spies.

32 How much more do I need to say? It would take too long to recount the stories of the faith of Gideon, Barak, Samson, Jephthah, David, Samuel, and all the prophets. 33 By faith these people overthrew kingdoms, ruled with justice, and received what God had promised them. They shut the mouths of lions, 34 quenched the flames of fire, and escaped death by the edge of the sword. Their weakness was turned to strength. They became strong in battle and put whole armies to flight. 35 Women received their loved ones back again from death.

But others were tortured, refusing to turn from God in order to be set free. They placed their hope in a better life after the resurrection. 36 Some were jeered at, and their backs were cut open with whips. Others were chained in prisons. 37 Some died by stoning, some were sawed in half,[d] and others were killed with the sword. Some went about wearing skins of sheep and goats, destitute and oppressed and mistreated. 38 They were too good for this world, wandering over deserts and mountains, hiding in caves and holes in the ground.

39 All these people earned a good reputation because of their faith, yet none of them received all that God had promised. 40 For God had something better in mind for us, so that they would not reach perfection without us.
–
Footnotes: