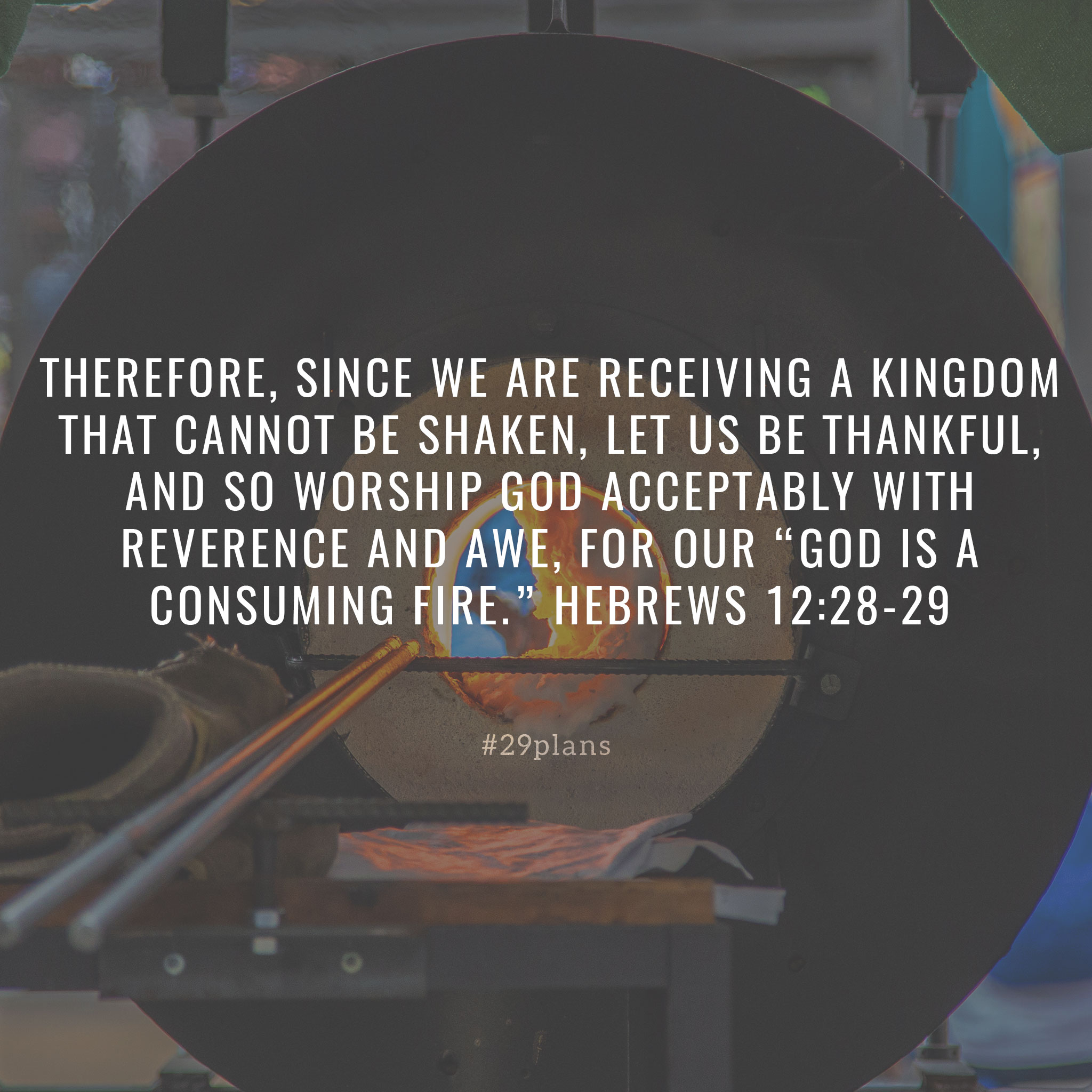 Verse of the Day: Therefore, since we are receiving a kingdom that cannot be shaken, let us be thankful, and so worship God acceptably with reverence and awe, for our “God is a consuming fire.” Hebrews 12:28-29

Solomon Asks for Wisdom
1 Solomon made an alliance with Pharaoh king of Egypt and married his daughter. He brought her to the City of David until he finished building his palace and the temple of the Lord, and the wall around Jerusalem. 2 The people, however, were still sacrificing at the high places, because a temple had not yet been built for the Name of the Lord. 3 Solomon showed his love for the Lord by walking according to the instructions given him by his father David, except that he offered sacrifices and burned incense on the high places.

4 The king went to Gibeon to offer sacrifices, for that was the most important high place, and Solomon offered a thousand burnt offerings on that altar. 5 At Gibeon the Lord appeared to Solomon during the night in a dream, and God said, “Ask for whatever you want me to give you.”

6 Solomon answered, “You have shown great kindness to your servant, my father David, because he was faithful to you and righteous and upright in heart. You have continued this great kindness to him and have given him a son to sit on his throne this very day.

7 “Now, Lord my God, you have made your servant king in place of my father David. But I am only a little child and do not know how to carry out my duties. 8 Your servant is here among the people you have chosen, a great people, too numerous to count or number. 9 So give your servant a discerning heart to govern your people and to distinguish between right and wrong. For who is able to govern this great people of yours?”

10 The Lord was pleased that Solomon had asked for this. 11 So God said to him, “Since you have asked for this and not for long life or wealth for yourself, nor have asked for the death of your enemies but for discernment in administering justice, 12 I will do what you have asked. I will give you a wise and discerning heart, so that there will never have been anyone like you, nor will there ever be. 13 Moreover, I will give you what you have not asked for—both wealth and honor—so that in your lifetime you will have no equal among kings. 14 And if you walk in obedience to me and keep my decrees and commands as David your father did, I will give you a long life.” 15 Then Solomon awoke—and he realized it had been a dream.

He returned to Jerusalem, stood before the ark of the Lord’s covenant and sacrificed burnt offerings and fellowship offerings. Then he gave a feast for all his court.

A Wise Ruling
16 Now two prostitutes came to the king and stood before him. 17 One of them said, “Pardon me, my lord. This woman and I live in the same house, and I had a baby while she was there with me. 18 The third day after my child was born, this woman also had a baby. We were alone; there was no one in the house but the two of us.

19 “During the night this woman’s son died because she lay on him. 20 So she got up in the middle of the night and took my son from my side while I your servant was asleep. She put him by her breast and put her dead son by my breast. 21 The next morning, I got up to nurse my son—and he was dead! But when I looked at him closely in the morning light, I saw that it wasn’t the son I had borne.”

But the first one insisted, “No! The dead one is yours; the living one is mine.” And so they argued before the king.

24 Then the king said, “Bring me a sword.” So they brought a sword for the king. 25 He then gave an order: “Cut the living child in two and give half to one and half to the other.”

26 The woman whose son was alive was deeply moved out of love for her son and said to the king, “Please, my lord, give her the living baby! Don’t kill him!”

But the other said, “Neither I nor you shall have him. Cut him in two!”

27 Then the king gave his ruling: “Give the living baby to the first woman. Do not kill him; she is his mother.”

28 When all Israel heard the verdict the king had given, they held the king in awe, because they saw that he had wisdom from God to administer justice.

Warning and Encouragement
14 Make every effort to live in peace with everyone and to be holy; without holiness no one will see the Lord. 15 See to it that no one falls short of the grace of God and that no bitter root grows up to cause trouble and defile many. 16 See that no one is sexually immoral, or is godless like Esau, who for a single meal sold his inheritance rights as the oldest son. 17 Afterward, as you know, when he wanted to inherit this blessing, he was rejected. Even though he sought the blessing with tears, he could not change what he had done.

The Mountain of Fear and the Mountain of Joy
18 You have not come to a mountain that can be touched and that is burning with fire; to darkness, gloom and storm; 19 to a trumpet blast or to such a voice speaking words that those who heard it begged that no further word be spoken to them, 20 because they could not bear what was commanded: “If even an animal touches the mountain, it must be stoned to death.”[a] 21 The sight was so terrifying that Moses said, “I am trembling with fear.”[b]

22 But you have come to Mount Zion, to the city of the living God, the heavenly Jerusalem. You have come to thousands upon thousands of angels in joyful assembly, 23 to the church of the firstborn, whose names are written in heaven. You have come to God, the Judge of all, to the spirits of the righteous made perfect, 24 to Jesus the mediator of a new covenant, and to the sprinkled blood that speaks a better word than the blood of Abel.

25 See to it that you do not refuse him who speaks. If they did not escape when they refused him who warned them on earth, how much less will we, if we turn away from him who warns us from heaven? 26 At that time his voice shook the earth, but now he has promised, “Once more I will shake not only the earth but also the heavens.”[c] 27 The words “once more” indicate the removing of what can be shaken—that is, created things—so that what cannot be shaken may remain.

28 Therefore, since we are receiving a kingdom that cannot be shaken, let us be thankful, and so worship God acceptably with reverence and awe, 29 for our “God is a consuming fire.”[d] –
Footnotes: