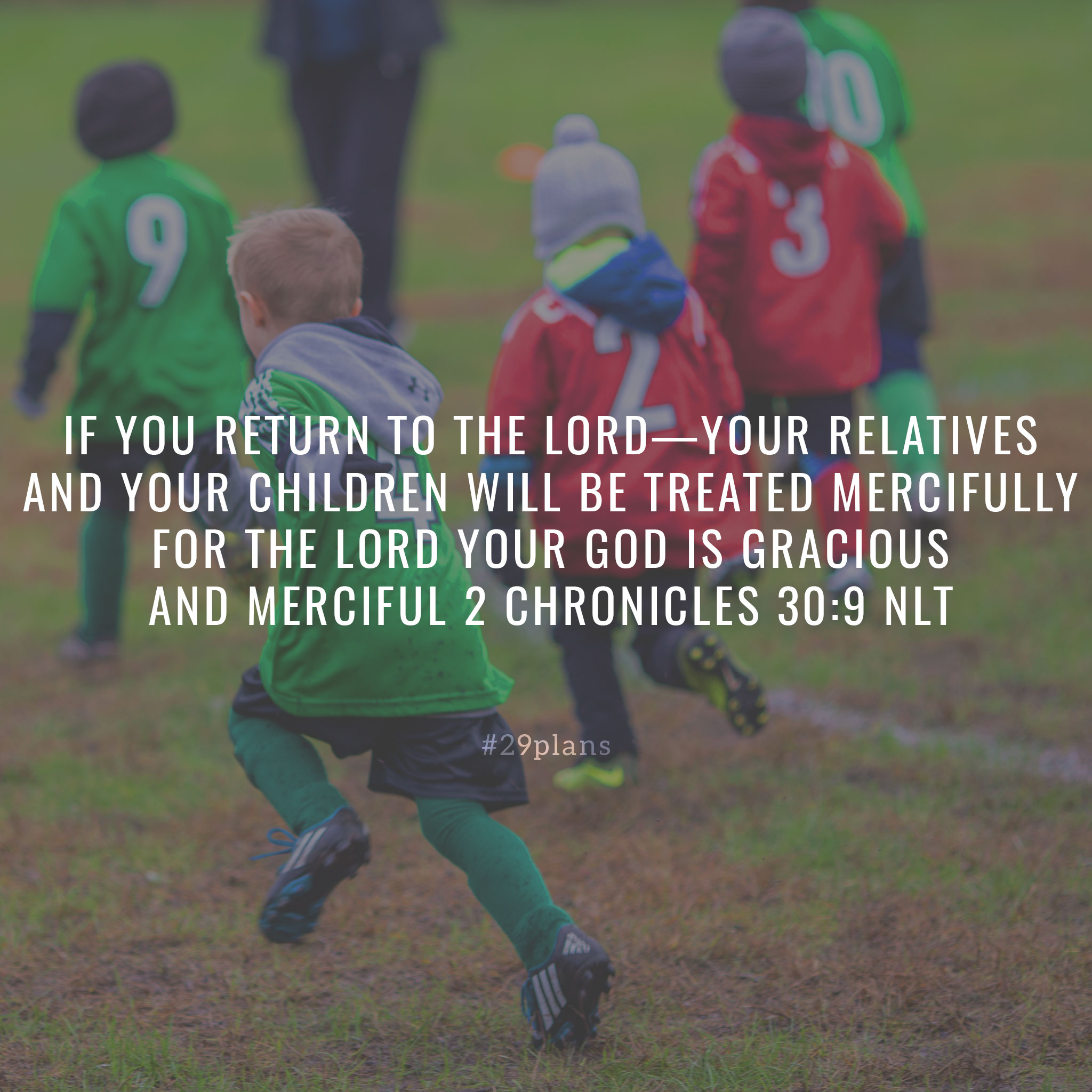 Guide: Read 2 Chronicles 30; Listen to A Return by @crowdermusic; Pray for your family legacy; How can you set a course for your descendants?

Verse of the Day: If you return to the Lord—your relatives and your children will be treated mercifully—For the Lord your God is gracious and merciful 2 Chronicles 30:9 NLT

Song of the Day: A Return by David Crowder — Youtube

Preparations for Passover
30 King Hezekiah now sent word to all Israel and Judah, and he wrote letters of invitation to the people of Ephraim and Manasseh. He asked everyone to come to the Temple of the Lord at Jerusalem to celebrate the Passover of the Lord, the God of Israel. 2 The king, his officials, and all the community of Jerusalem decided to celebrate Passover a month later than usual.[a] 3 They were unable to celebrate it at the prescribed time because not enough priests could be purified by then, and the people had not yet assembled at Jerusalem.

4 This plan for keeping the Passover seemed right to the king and all the people. 5 So they sent a proclamation throughout all Israel, from Beersheba in the south to Dan in the north, inviting everyone to come to Jerusalem to celebrate the Passover of the Lord, the God of Israel. The people had not been celebrating it in great numbers as required in the Law.

6 At the king’s command, runners were sent throughout Israel and Judah. They carried letters that said:

“O people of Israel, return to the Lord, the God of Abraham, Isaac, and Israel,[b] so that he will return to the few of us who have survived the conquest of the Assyrian kings. 7 Do not be like your ancestors and relatives who abandoned the Lord, the God of their ancestors, and became an object of derision, as you yourselves can see. 8 Do not be stubborn, as they were, but submit yourselves to the Lord. Come to his Temple, which he has set apart as holy forever. Worship the Lord your God so that his fierce anger will turn away from you.

9 “For if you return to the Lord, your relatives and your children will be treated mercifully by their captors, and they will be able to return to this land. For the Lord your God is gracious and merciful. If you return to him, he will not continue to turn his face from you.”

Celebration of Passover
10 The runners went from town to town throughout Ephraim and Manasseh and as far as the territory of Zebulun. But most of the people just laughed at the runners and made fun of them. 11 However, some people from Asher, Manasseh, and Zebulun humbled themselves and went to Jerusalem.

12 At the same time, God’s hand was on the people in the land of Judah, giving them all one heart to obey the orders of the king and his officials, who were following the word of the Lord. 13 So a huge crowd assembled at Jerusalem in midspring[c] to celebrate the Festival of Unleavened Bread. 14 They set to work and removed the pagan altars from Jerusalem. They took away all the incense altars and threw them into the Kidron Valley.

15 On the fourteenth day of the second month, one month later than usual,[d] the people slaughtered the Passover lamb. This shamed the priests and Levites, so they purified themselves and brought burnt offerings to the Temple of the Lord. 16 Then they took their places at the Temple as prescribed in the Law of Moses, the man of God. The Levites brought the sacrificial blood to the priests, who then sprinkled it on the altar.

17 Since many of the people had not purified themselves, the Levites had to slaughter their Passover lamb for them, to set them apart for the Lord. 18 Most of those who came from Ephraim, Manasseh, Issachar, and Zebulun had not purified themselves. But King Hezekiah prayed for them, and they were allowed to eat the Passover meal anyway, even though this was contrary to the requirements of the Law. For Hezekiah said, “May the Lord, who is good, pardon those 19 who decide to follow the Lord, the God of their ancestors, even though they are not properly cleansed for the ceremony.” 20 And the Lord listened to Hezekiah’s prayer and healed the people.

21 So the people of Israel who were present in Jerusalem joyously celebrated the Festival of Unleavened Bread for seven days. Each day the Levites and priests sang to the Lord, accompanied by loud instruments.[e] 22 Hezekiah encouraged all the Levites regarding the skill they displayed as they served the Lord. The celebration continued for seven days. Peace offerings were sacrificed, and the people gave thanks to the Lord, the God of their ancestors.

25 The entire assembly of Judah rejoiced, including the priests, the Levites, all who came from the land of Israel, the foreigners who came to the festival, and all those who lived in Judah. 26 There was great joy in the city, for Jerusalem had not seen a celebration like this one since the days of Solomon, King David’s son. 27 Then the priests and Levites stood and blessed the people, and God heard their prayer from his holy dwelling in heaven.
–
Footnotes: