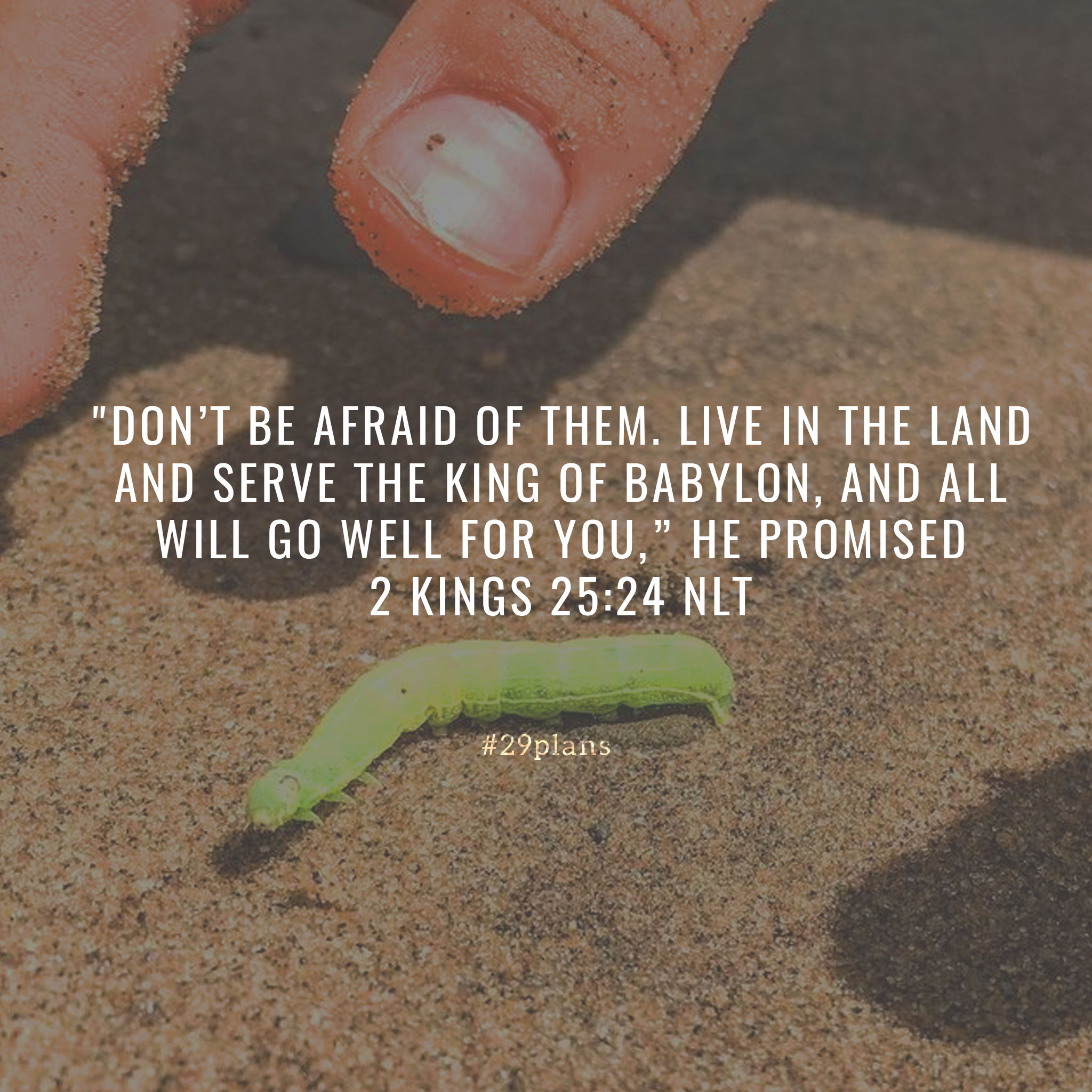 Guide: Read 2 Kings 25; Listen to Fear Not by @christomlin; Pray for fathers and sons; How does God move in your brokenness?

Verse of the Day: “Don’t be afraid of them. Live in the land and serve the king of Babylon, and all will go well for you,” he promised 2 Kings 25:24 NLT

Song of the Day: Fear Not by Chris Tomlin — Youtube

1 So on January 15,[a] during the ninth year of Zedekiah’s reign, King Nebuchadnezzar of Babylon led his entire army against Jerusalem. They surrounded the city and built siege ramps against its walls. 2 Jerusalem was kept under siege until the eleventh year of King Zedekiah’s reign.

3 By July 18 in the eleventh year of Zedekiah’s reign,[b] the famine in the city had become very severe, and the last of the food was entirely gone. 4 Then a section of the city wall was broken down. Since the city was surrounded by the Babylonians,[c] the soldiers waited for nightfall and escaped[d] through the gate between the two walls behind the king’s garden. Then they headed toward the Jordan Valley.[e]

5 But the Babylonian[f] troops chased the king and overtook him on the plains of Jericho, for his men had all deserted him and scattered. 6 They captured the king and took him to the king of Babylon at Riblah, where they pronounced judgment upon Zedekiah. 7 They made Zedekiah watch as they slaughtered his sons. Then they gouged out Zedekiah’s eyes, bound him in bronze chains, and led him away to Babylon.

The Temple Destroyed
8 On August 14 of that year,[g] which was the nineteenth year of King Nebuchadnezzar’s reign, Nebuzaradan, the captain of the guard and an official of the Babylonian king, arrived in Jerusalem. 9 He burned down the Temple of the Lord, the royal palace, and all the houses of Jerusalem. He destroyed all the important buildings[h] in the city. 10 Then he supervised the entire Babylonian army as they tore down the walls of Jerusalem on every side. 11 Then Nebuzaradan, the captain of the guard, took as exiles the rest of the people who remained in the city, the defectors who had declared their allegiance to the king of Babylon, and the rest of the population. 12 But the captain of the guard allowed some of the poorest people to stay behind to care for the vineyards and fields.

13 The Babylonians broke up the bronze pillars in front of the Lord’s Temple, the bronze water carts, and the great bronze basin called the Sea, and they carried all the bronze away to Babylon. 14 They also took all the ash buckets, shovels, lamp snuffers, ladles, and all the other bronze articles used for making sacrifices at the Temple. 15 The captain of the guard also took the incense burners and basins, and all the other articles made of pure gold or silver.

16 The weight of the bronze from the two pillars, the Sea, and the water carts was too great to be measured. These things had been made for the Lord’s Temple in the days of Solomon. 17 Each of the pillars was 27 feet[i] tall. The bronze capital on top of each pillar was 7 1⁄2 feet[j] high and was decorated with a network of bronze pomegranates all the way around.

18 Nebuzaradan, the captain of the guard, took with him as prisoners Seraiah the high priest, Zephaniah the priest of the second rank, and the three chief gatekeepers. 19 And from among the people still hiding in the city, he took an officer who had been in charge of the Judean army; five of the king’s personal advisers; the army commander’s chief secretary, who was in charge of recruitment; and sixty other citizens. 20 Nebuzaradan, the captain of the guard, took them all to the king of Babylon at Riblah. 21 And there at Riblah, in the land of Hamath, the king of Babylon had them all put to death. So the people of Judah were sent into exile from their land.

Gedaliah Governs in Judah
22 Then King Nebuchadnezzar appointed Gedaliah son of Ahikam and grandson of Shaphan as governor over the people he had left in Judah. 23 When all the army commanders and their men learned that the king of Babylon had appointed Gedaliah as governor, they went to see him at Mizpah. These included Ishmael son of Nethaniah, Johanan son of Kareah, Seraiah son of Tanhumeth the Netophathite, Jezaniah[k] son of the Maacathite, and all their men.

24 Gedaliah vowed to them that the Babylonian officials meant them no harm. “Don’t be afraid of them. Live in the land and serve the king of Babylon, and all will go well for you,” he promised.

25 But in midautumn of that year,[l] Ishmael son of Nethaniah and grandson of Elishama, who was a member of the royal family, went to Mizpah with ten men and killed Gedaliah. He also killed all the Judeans and Babylonians who were with him at Mizpah.

26 Then all the people of Judah, from the least to the greatest, as well as the army commanders, fled in panic to Egypt, for they were afraid of what the Babylonians would do to them.

Hope for Israel’s Royal Line
27 In the thirty-seventh year of the exile of King Jehoiachin of Judah, Evil-merodach ascended to the Babylonian throne. He was kind to[m] Jehoiachin and released him[n] from prison on April 2 of that year.[o] 28 He spoke kindly to Jehoiachin and gave him a higher place than all the other exiled kings in Babylon. 29 He supplied Jehoiachin with new clothes to replace his prison garb and allowed him to dine in the king’s presence for the rest of his life. 30 So the king gave him a regular food allowance as long as he lived.
–
Footnotes: