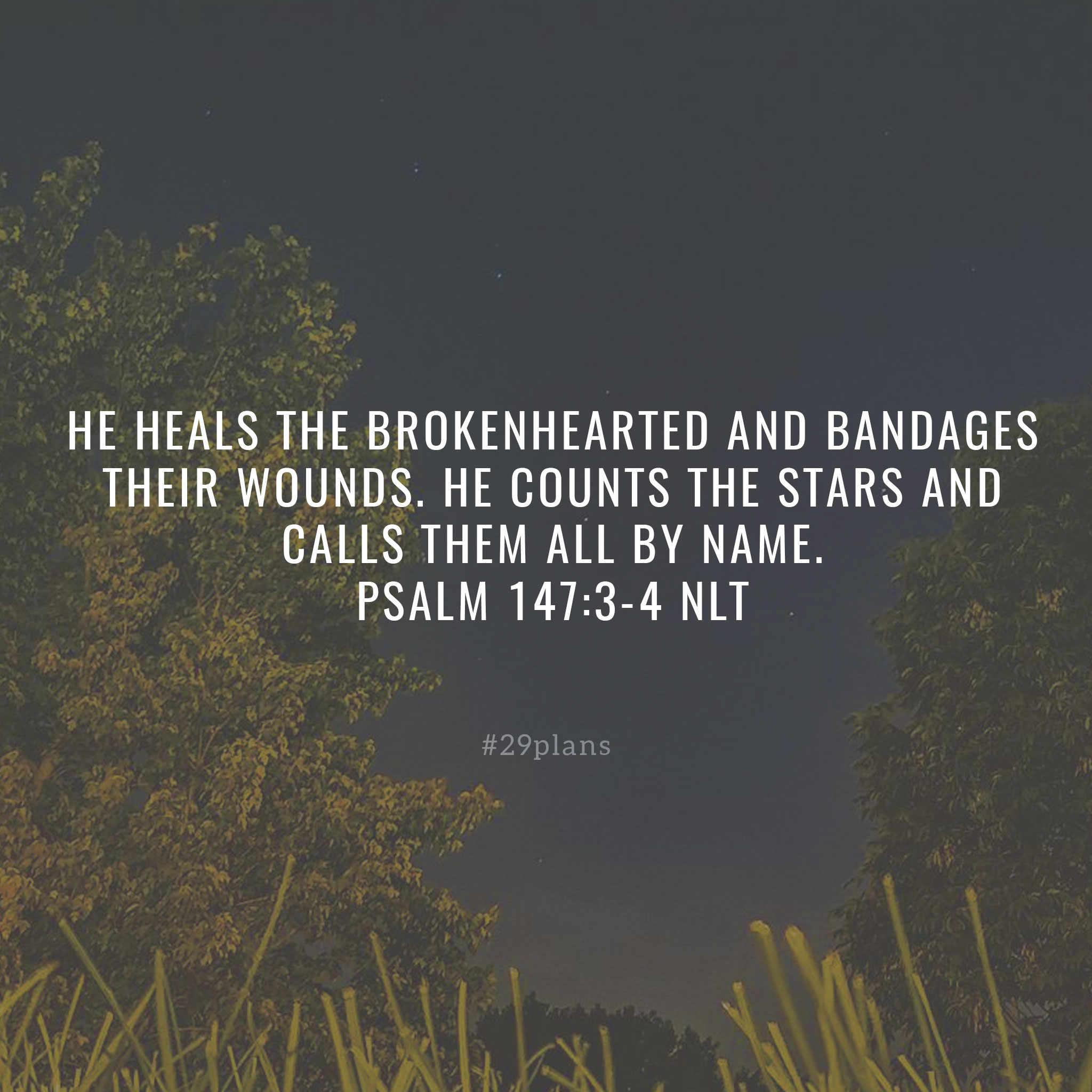 Verse of the Day: He heals the brokenhearted and bandages their wounds. He counts the stars and calls them all by name. Psalm 147:3-4 NLT

Song of the Day: Count the Stars by Everfound — Youtube

1 Praise the Lord!
How good to sing praises to our God!
How delightful and how fitting!
2 The Lord is rebuilding Jerusalem
and bringing the exiles back to Israel.
3 He heals the brokenhearted
and bandages their wounds.
4 He counts the stars
and calls them all by name.
5 How great is our Lord! His power is absolute!
His understanding is beyond comprehension!
6 The Lord supports the humble,
but he brings the wicked down into the dust.
7 Sing out your thanks to the Lord;
sing praises to our God with a harp.
8 He covers the heavens with clouds,
provides rain for the earth,
and makes the grass grow in mountain pastures.
9 He gives food to the wild animals
and feeds the young ravens when they cry.
10 He takes no pleasure in the strength of a horse
or in human might.
11 No, the Lord’s delight is in those who fear him,
those who put their hope in his unfailing love.
12 Glorify the Lord, O Jerusalem!
Praise your God, O Zion!
13 For he has strengthened the bars of your gates
and blessed your children within your walls.
14 He sends peace across your nation
and satisfies your hunger with the finest wheat.
15 He sends his orders to the world—
how swiftly his word flies!
16 He sends the snow like white wool;
he scatters frost upon the ground like ashes.
17 He hurls the hail like stones.[a] Who can stand against his freezing cold?
18 Then, at his command, it all melts.
He sends his winds, and the ice thaws.
19 He has revealed his words to Jacob,
his decrees and regulations to Israel.
20 He has not done this for any other nation;
they do not know his regulations.
Praise the Lord!
–
Footnotes:

Songs of Victory in Heaven
1 After this, I heard what sounded like a vast crowd in heaven shouting,

“Praise the Lord![a] Salvation and glory and power belong to our God.
2 His judgments are true and just.
He has punished the great prostitute
who corrupted the earth with her immorality.
He has avenged the murder of his servants.”
3 And again their voices rang out:

“Praise the Lord!
The smoke from that city ascends forever and ever!”
4 Then the twenty-four elders and the four living beings fell down and worshiped God, who was sitting on the throne. They cried out, “Amen! Praise the Lord!”

5 And from the throne came a voice that said,

“Praise our God,
all his servants,
all who fear him,
from the least to the greatest.”
6 Then I heard again what sounded like the shout of a vast crowd or the roar of mighty ocean waves or the crash of loud thunder:

“Praise the Lord!
For the Lord our God,[b] the Almighty, reigns.
7 Let us be glad and rejoice,
and let us give honor to him.
For the time has come for the wedding feast of the Lamb,
and his bride has prepared herself.
8 She has been given the finest of pure white linen to wear.”
For the fine linen represents the good deeds of God’s holy people.
9 And the angel said to me, “Write this: Blessed are those who are invited to the wedding feast of the Lamb.” And he added, “These are true words that come from God.”

10 Then I fell down at his feet to worship him, but he said, “No, don’t worship me. I am a servant of God, just like you and your brothers and sisters[c] who testify about their faith in Jesus. Worship only God. For the essence of prophecy is to give a clear witness for Jesus.[d]”

The Rider on the White Horse
11 Then I saw heaven opened, and a white horse was standing there. Its rider was named Faithful and True, for he judges fairly and wages a righteous war. 12 His eyes were like flames of fire, and on his head were many crowns. A name was written on him that no one understood except himself. 13 He wore a robe dipped in blood, and his title was the Word of God. 14 The armies of heaven, dressed in the finest of pure white linen, followed him on white horses. 15 From his mouth came a sharp sword to strike down the nations. He will rule them with an iron rod. He will release the fierce wrath of God, the Almighty, like juice flowing from a winepress. 16 On his robe at his thigh[e] was written this title: King of all kings and Lord of all lords.

17 Then I saw an angel standing in the sun, shouting to the vultures flying high in the sky: “Come! Gather together for the great banquet God has prepared. 18 Come and eat the flesh of kings, generals, and strong warriors; of horses and their riders; and of all humanity, both free and slave, small and great.”

19 Then I saw the beast and the kings of the world and their armies gathered together to fight against the one sitting on the horse and his army. 20 And the beast was captured, and with him the false prophet who did mighty miracles on behalf of the beast—miracles that deceived all who had accepted the mark of the beast and who worshiped his statue. Both the beast and his false prophet were thrown alive into the fiery lake of burning sulfur. 21 Their entire army was killed by the sharp sword that came from the mouth of the one riding the white horse. And the vultures all gorged themselves on the dead bodies.
–
Footnotes: