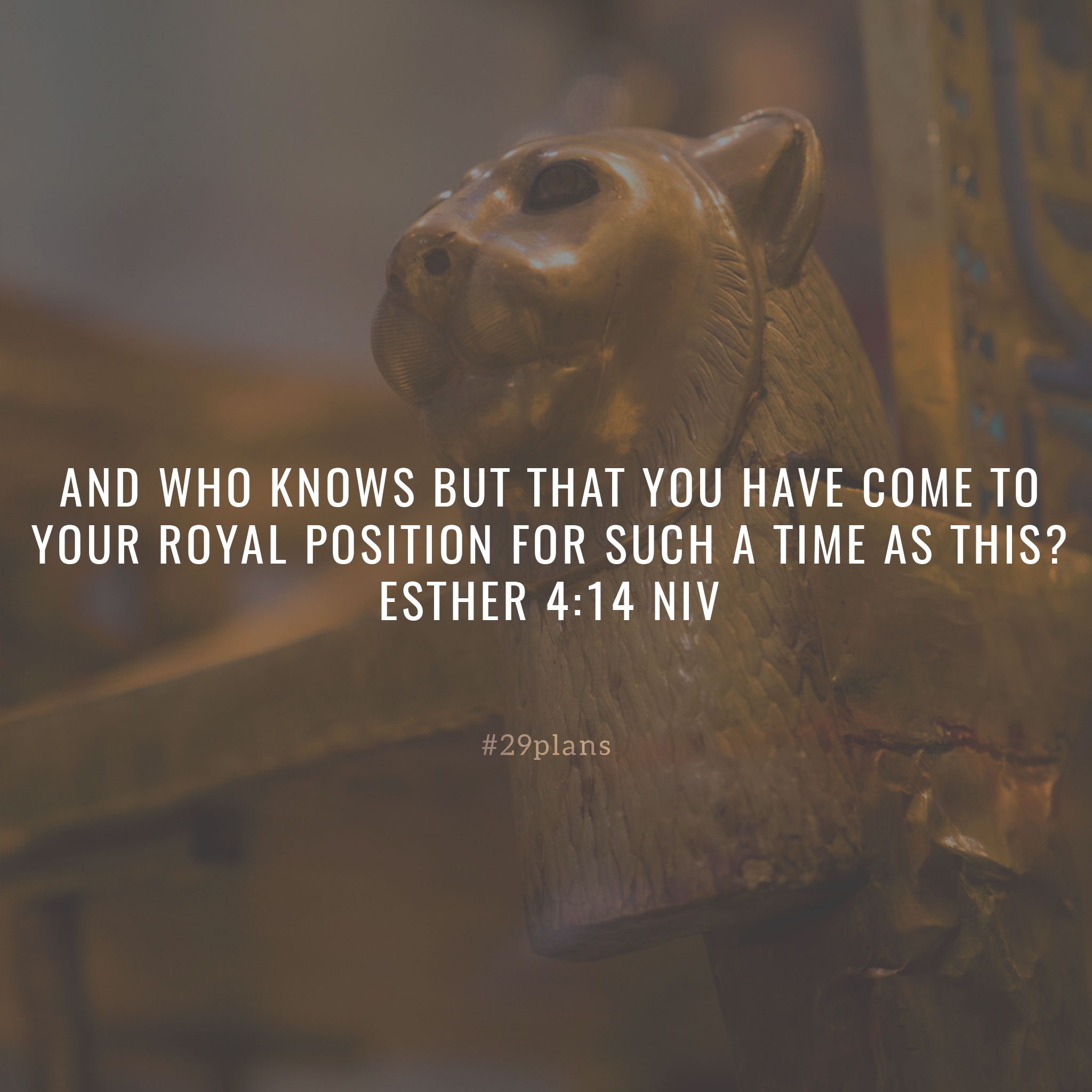 Guide: Read Esther 4, 5, 6; Listen to Such a Time as This by @jthemills; Pray for daughters and sisters; Text or call to encourage them

Verse of the Day: And who knows but that you have come to your royal position for such a time as this? Esther 4:14 NIV

Song of the Day: Such a Time as This by Jonathan Mills — Youtube

Mordecai Persuades Esther to Help
1 When Mordecai learned of all that had been done, he tore his clothes, put on sackcloth and ashes, and went out into the city, wailing loudly and bitterly. 2 But he went only as far as the king’s gate, because no one clothed in sackcloth was allowed to enter it. 3 In every province to which the edict and order of the king came, there was great mourning among the Jews, with fasting, weeping and wailing. Many lay in sackcloth and ashes.

4 When Esther’s eunuchs and female attendants came and told her about Mordecai, she was in great distress. She sent clothes for him to put on instead of his sackcloth, but he would not accept them. 5 Then Esther summoned Hathak, one of the king’s eunuchs assigned to attend her, and ordered him to find out what was troubling Mordecai and why.

6 So Hathak went out to Mordecai in the open square of the city in front of the king’s gate. 7 Mordecai told him everything that had happened to him, including the exact amount of money Haman had promised to pay into the royal treasury for the destruction of the Jews. 8 He also gave him a copy of the text of the edict for their annihilation, which had been published in Susa, to show to Esther and explain it to her, and he told him to instruct her to go into the king’s presence to beg for mercy and plead with him for her people.

9 Hathak went back and reported to Esther what Mordecai had said. 10 Then she instructed him to say to Mordecai, 11 “All the king’s officials and the people of the royal provinces know that for any man or woman who approaches the king in the inner court without being summoned the king has but one law: that they be put to death unless the king extends the gold scepter to them and spares their lives. But thirty days have passed since I was called to go to the king.”

12 When Esther’s words were reported to Mordecai, 13 he sent back this answer: “Do not think that because you are in the king’s house you alone of all the Jews will escape. 14 For if you remain silent at this time, relief and deliverance for the Jews will arise from another place, but you and your father’s family will perish. And who knows but that you have come to your royal position for such a time as this?”

15 Then Esther sent this reply to Mordecai: 16 “Go, gather together all the Jews who are in Susa, and fast for me. Do not eat or drink for three days, night or day. I and my attendants will fast as you do. When this is done, I will go to the king, even though it is against the law. And if I perish, I perish.”

17 So Mordecai went away and carried out all of Esther’s instructions.

Esther’s Request to the King
1 On the third day Esther put on her royal robes and stood in the inner court of the palace, in front of the king’s hall. The king was sitting on his royal throne in the hall, facing the entrance. 2 When he saw Queen Esther standing in the court, he was pleased with her and held out to her the gold scepter that was in his hand. So Esther approached and touched the tip of the scepter.

3 Then the king asked, “What is it, Queen Esther? What is your request? Even up to half the kingdom, it will be given you.”

4 “If it pleases the king,” replied Esther, “let the king, together with Haman, come today to a banquet I have prepared for him.”

5 “Bring Haman at once,” the king said, “so that we may do what Esther asks.”

So the king and Haman went to the banquet Esther had prepared. 6 As they were drinking wine, the king again asked Esther, “Now what is your petition? It will be given you. And what is your request? Even up to half the kingdom, it will be granted.”

7 Esther replied, “My petition and my request is this: 8 If the king regards me with favor and if it pleases the king to grant my petition and fulfill my request, let the king and Haman come tomorrow to the banquet I will prepare for them. Then I will answer the king’s question.”

Haman’s Rage Against Mordecai
9 Haman went out that day happy and in high spirits. But when he saw Mordecai at the king’s gate and observed that he neither rose nor showed fear in his presence, he was filled with rage against Mordecai. 10 Nevertheless, Haman restrained himself and went home.

Calling together his friends and Zeresh, his wife, 11 Haman boasted to them about his vast wealth, his many sons, and all the ways the king had honored him and how he had elevated him above the other nobles and officials. 12 “And that’s not all,” Haman added. “I’m the only person Queen Esther invited to accompany the king to the banquet she gave. And she has invited me along with the king tomorrow. 13 But all this gives me no satisfaction as long as I see that Jew Mordecai sitting at the king’s gate.”

14 His wife Zeresh and all his friends said to him, “Have a pole set up, reaching to a height of fifty cubits,[a] and ask the king in the morning to have Mordecai impaled on it. Then go with the king to the banquet and enjoy yourself.” This suggestion delighted Haman, and he had the pole set up.
–
Footnotes:

Mordecai Honored
1 That night the king could not sleep; so he ordered the book of the chronicles, the record of his reign, to be brought in and read to him. 2 It was found recorded there that Mordecai had exposed Bigthana and Teresh, two of the king’s officers who guarded the doorway, who had conspired to assassinate King Xerxes.

3 “What honor and recognition has Mordecai received for this?” the king asked.

“Nothing has been done for him,” his attendants answered.

4 The king said, “Who is in the court?” Now Haman had just entered the outer court of the palace to speak to the king about impaling Mordecai on the pole he had set up for him.

5 His attendants answered, “Haman is standing in the court.”

“Bring him in,” the king ordered.

6 When Haman entered, the king asked him, “What should be done for the man the king delights to honor?”

10 “Go at once,” the king commanded Haman. “Get the robe and the horse and do just as you have suggested for Mordecai the Jew, who sits at the king’s gate. Do not neglect anything you have recommended.”

11 So Haman got the robe and the horse. He robed Mordecai, and led him on horseback through the city streets, proclaiming before him, “This is what is done for the man the king delights to honor!”

12 Afterward Mordecai returned to the king’s gate. But Haman rushed home, with his head covered in grief, 13 and told Zeresh his wife and all his friends everything that had happened to him.

His advisers and his wife Zeresh said to him, “Since Mordecai, before whom your downfall has started, is of Jewish origin, you cannot stand against him—you will surely come to ruin!” 14 While they were still talking with him, the king’s eunuchs arrived and hurried Haman away to the banquet Esther had prepared.