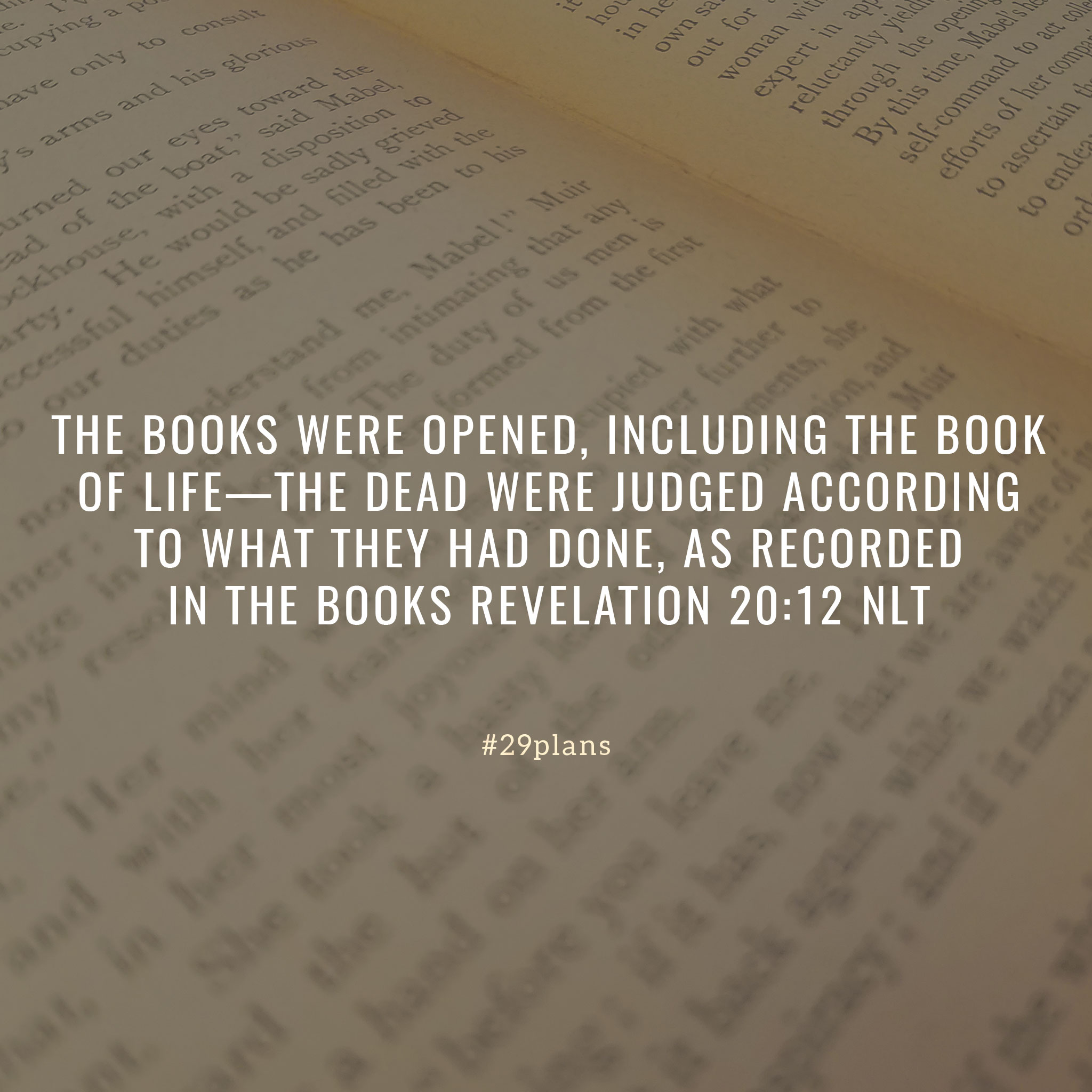 Guide: Read Proverbs 30:18-33; Revelation 20; Listen to Shout Unto God by @hillsongunited; Pray for your church; Journal on Revelation 20

Verse of the Day: The books were opened, including the Book of Life—the dead were judged according to what they had done, as recorded in the books Revelation 20:12 NLT

Song of the Day: Shout Unto God by Hillsong United — Youtube

18 There are three things that amaze me—
no, four things that I don’t understand:
19 how an eagle glides through the sky,
how a snake slithers on a rock,
how a ship navigates the ocean,
how a man loves a woman.
20 An adulterous woman consumes a man,
then wipes her mouth and says, “What’s wrong with that?”
21 There are three things that make the earth tremble—
no, four it cannot endure:
22 a slave who becomes a king,
an overbearing fool who prospers,
23 a bitter woman who finally gets a husband,
a servant girl who supplants her mistress.
24 There are four things on earth that are small but unusually wise:
25 Ants—they aren’t strong,
but they store up food all summer.
26 Hyraxes[a]—they aren’t powerful,
but they make their homes among the rocks.
27 Locusts—they have no king,
but they march in formation.
28 Lizards—they are easy to catch,
but they are found even in kings’ palaces.
29 There are three things that walk with stately stride—
no, four that strut about:
30 the lion, king of animals, who won’t turn aside for anything,
31 the strutting rooster,
the male goat,
a king as he leads his army.
32 If you have been a fool by being proud or plotting evil,
cover your mouth in shame.
33 As the beating of cream yields butter
and striking the nose causes bleeding,
so stirring up anger causes quarrels.
–
Footnotes:

The Thousand Years
1 Then I saw an angel coming down from heaven with the key to the bottomless pit[a] and a heavy chain in his hand. 2 He seized the dragon—that old serpent, who is the devil, Satan—and bound him in chains for a thousand years. 3 The angel threw him into the bottomless pit, which he then shut and locked so Satan could not deceive the nations anymore until the thousand years were finished. Afterward he must be released for a little while.

4 Then I saw thrones, and the people sitting on them had been given the authority to judge. And I saw the souls of those who had been beheaded for their testimony about Jesus and for proclaiming the word of God. They had not worshiped the beast or his statue, nor accepted his mark on their foreheads or their hands. They all came to life again, and they reigned with Christ for a thousand years.

The Defeat of Satan
7 When the thousand years come to an end, Satan will be let out of his prison. 8 He will go out to deceive the nations—called Gog and Magog—in every corner of the earth. He will gather them together for battle—a mighty army, as numberless as sand along the seashore. 9 And I saw them as they went up on the broad plain of the earth and surrounded God’s people and the beloved city. But fire from heaven came down on the attacking armies and consumed them.

10 Then the devil, who had deceived them, was thrown into the fiery lake of burning sulfur, joining the beast and the false prophet. There they will be tormented day and night forever and ever.

The Final Judgment
11 And I saw a great white throne and the one sitting on it. The earth and sky fled from his presence, but they found no place to hide. 12 I saw the dead, both great and small, standing before God’s throne. And the books were opened, including the Book of Life. And the dead were judged according to what they had done, as recorded in the books. 13 The sea gave up its dead, and death and the grave[b] gave up their dead. And all were judged according to their deeds. 14 Then death and the grave were thrown into the lake of fire. This lake of fire is the second death. 15 And anyone whose name was not found recorded in the Book of Life was thrown into the lake of fire.
–
Footnotes: