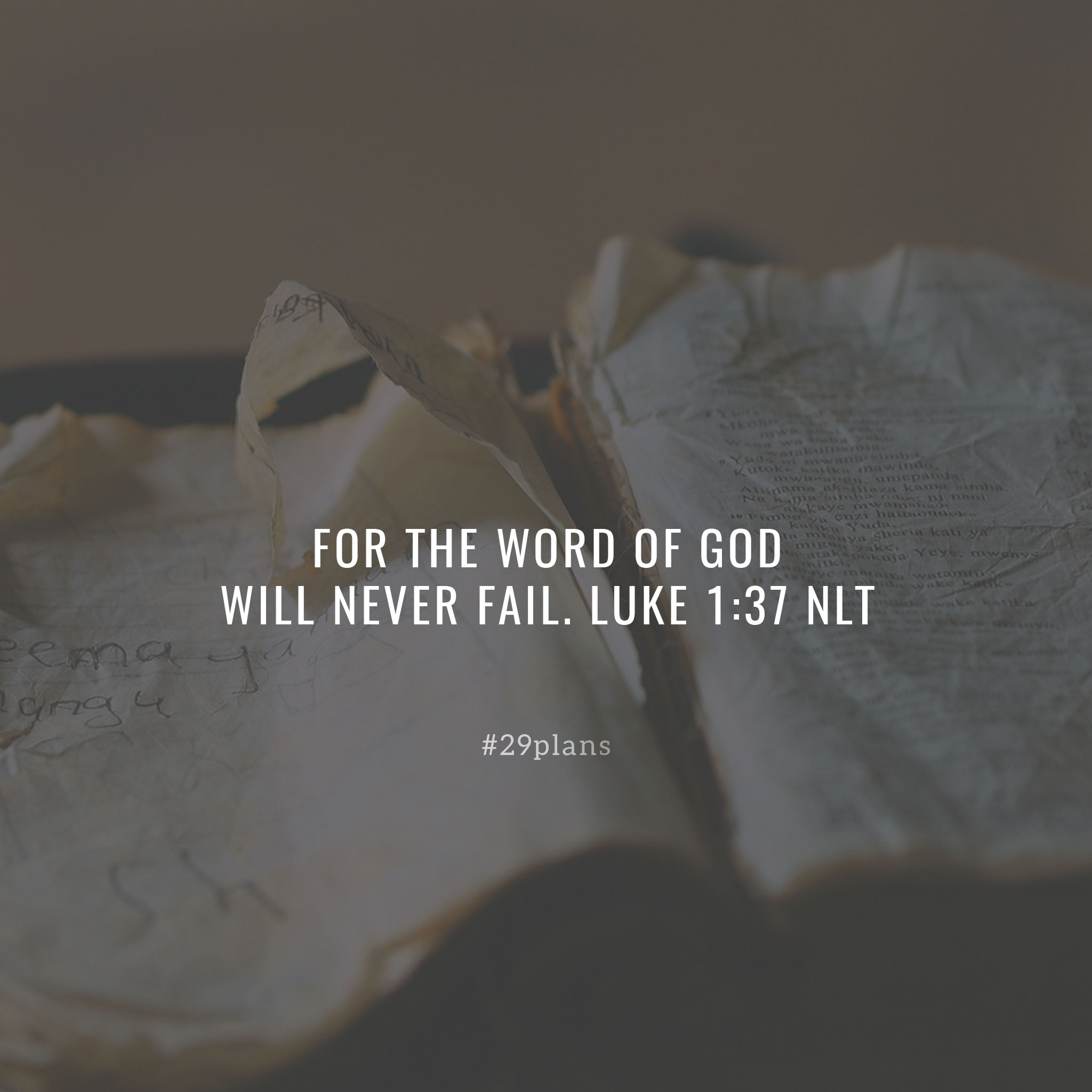 Guide: Read Nehemiah 4; Luke 1:26-38; Listen to Nothing is Impossible by @vickybeeching; Pray for cousins; Memorize Luke 1:37

Verse of the Day: For the word of God will never fail. Luke 1:37 NLT

Song of the Day: Nothing is Impossible by Vicky Beeching — Youtube

Enemies Oppose the Rebuilding
1 [a]Sanballat was very angry when he learned that we were rebuilding the wall. He flew into a rage and mocked the Jews, 2 saying in front of his friends and the Samarian army officers, “What does this bunch of poor, feeble Jews think they’re doing? Do they think they can build the wall in a single day by just offering a few sacrifices?[b] Do they actually think they can make something of stones from a rubbish heap—and charred ones at that?”

3 Tobiah the Ammonite, who was standing beside him, remarked, “That stone wall would collapse if even a fox walked along the top of it!”

4 Then I prayed, “Hear us, our God, for we are being mocked. May their scoffing fall back on their own heads, and may they themselves become captives in a foreign land! 5 Do not ignore their guilt. Do not blot out their sins, for they have provoked you to anger here in front of[c] the builders.”

6 At last the wall was completed to half its height around the entire city, for the people had worked with enthusiasm.

7 [d]But when Sanballat and Tobiah and the Arabs, Ammonites, and Ashdodites heard that the work was going ahead and that the gaps in the wall of Jerusalem were being repaired, they were furious. 8 They all made plans to come and fight against Jerusalem and throw us into confusion. 9 But we prayed to our God and guarded the city day and night to protect ourselves.

10 Then the people of Judah began to complain, “The workers are getting tired, and there is so much rubble to be moved. We will never be able to build the wall by ourselves.”

11 Meanwhile, our enemies were saying, “Before they know what’s happening, we will swoop down on them and kill them and end their work.”

12 The Jews who lived near the enemy came and told us again and again, “They will come from all directions and attack us!”[e] 13 So I placed armed guards behind the lowest parts of the wall in the exposed areas. I stationed the people to stand guard by families, armed with swords, spears, and bows.

14 Then as I looked over the situation, I called together the nobles and the rest of the people and said to them, “Don’t be afraid of the enemy! Remember the Lord, who is great and glorious, and fight for your brothers, your sons, your daughters, your wives, and your homes!”

15 When our enemies heard that we knew of their plans and that God had frustrated them, we all returned to our work on the wall. 16 But from then on, only half my men worked while the other half stood guard with spears, shields, bows, and coats of mail. The leaders stationed themselves behind the people of Judah 17 who were building the wall. The laborers carried on their work with one hand supporting their load and one hand holding a weapon. 18 All the builders had a sword belted to their side. The trumpeter stayed with me to sound the alarm.

19 Then I explained to the nobles and officials and all the people, “The work is very spread out, and we are widely separated from each other along the wall. 20 When you hear the blast of the trumpet, rush to wherever it is sounding. Then our God will fight for us!”

21 We worked early and late, from sunrise to sunset. And half the men were always on guard. 22 I also told everyone living outside the walls to stay in Jerusalem. That way they and their servants could help with guard duty at night and work during the day. 23 During this time, none of us—not I, nor my relatives, nor my servants, nor the guards who were with me—ever took off our clothes. We carried our weapons with us at all times, even when we went for water.[f] –
Footnotes:

The Birth of Jesus Foretold
26 In the sixth month of Elizabeth’s pregnancy, God sent the angel Gabriel to Nazareth, a village in Galilee, 27 to a virgin named Mary. She was engaged to be married to a man named Joseph, a descendant of King David. 28 Gabriel appeared to her and said, “Greetings, favored woman! The Lord is with you![a]”

29 Confused and disturbed, Mary tried to think what the angel could mean. 30 “Don’t be afraid, Mary,” the angel told her, “for you have found favor with God! 31 You will conceive and give birth to a son, and you will name him Jesus. 32 He will be very great and will be called the Son of the Most High. The Lord God will give him the throne of his ancestor David. 33 And he will reign over Israel[b] forever; his Kingdom will never end!”

35 The angel replied, “The Holy Spirit will come upon you, and the power of the Most High will overshadow you. So the baby to be born will be holy, and he will be called the Son of God. 36 What’s more, your relative Elizabeth has become pregnant in her old age! People used to say she was barren, but she has conceived a son and is now in her sixth month. 37 For the word of God will never fail.[c]”

38 Mary responded, “I am the Lord’s servant. May everything you have said about me come true.” And then the angel left her.
–
Footnotes: