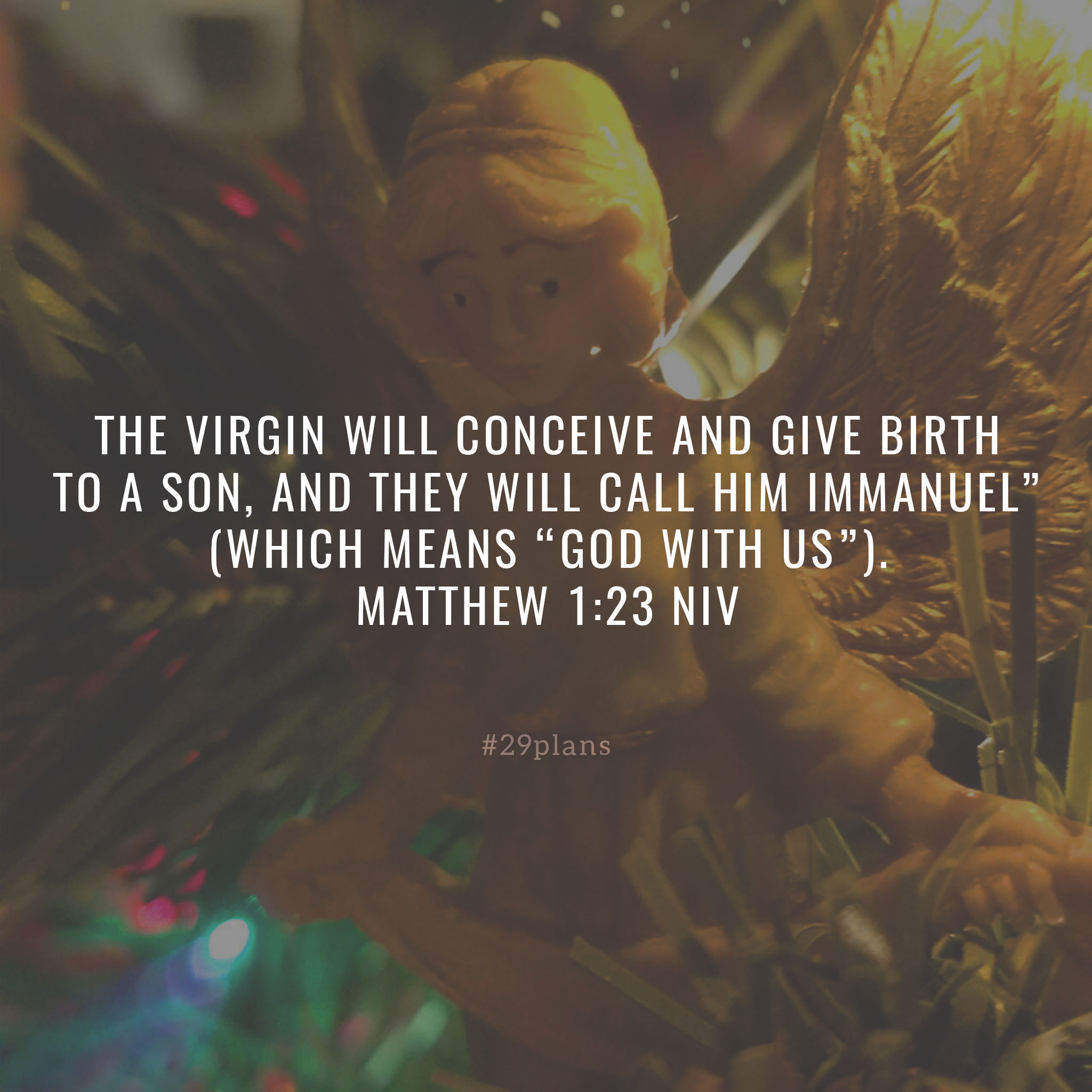 Verse of the Day: The virgin will conceive and give birth to a son, and they will call him Immanuel” (which means “God with us”). Matthew 1:23 NIV

The Israelites Confess Their Sins
1 On the twenty-fourth day of the same month, the Israelites gathered together, fasting and wearing sackcloth and putting dust on their heads. 2 Those of Israelite descent had separated themselves from all foreigners. They stood in their places and confessed their sins and the sins of their ancestors. 3 They stood where they were and read from the Book of the Law of the Lord their God for a quarter of the day, and spent another quarter in confession and in worshiping the Lord their God. 4 Standing on the stairs of the Levites were Jeshua, Bani, Kadmiel, Shebaniah, Bunni, Sherebiah, Bani and Kenani. They cried out with loud voices to the Lord their God. 5 And the Levites—Jeshua, Kadmiel, Bani, Hashabneiah, Sherebiah, Hodiah, Shebaniah and Pethahiah—said: “Stand up and praise the Lord your God, who is from everlasting to everlasting.[a]”

“Blessed be your glorious name, and may it be exalted above all blessing and praise. 6 You alone are the Lord. You made the heavens, even the highest heavens, and all their starry host, the earth and all that is on it, the seas and all that is in them. You give life to everything, and the multitudes of heaven worship you.

7 “You are the Lord God, who chose Abram and brought him out of Ur of the Chaldeans and named him Abraham. 8 You found his heart faithful to you, and you made a covenant with him to give to his descendants the land of the Canaanites, Hittites, Amorites, Perizzites, Jebusites and Girgashites. You have kept your promise because you are righteous.

9 “You saw the suffering of our ancestors in Egypt; you heard their cry at the Red Sea.[b] 10 You sent signs and wonders against Pharaoh, against all his officials and all the people of his land, for you knew how arrogantly the Egyptians treated them. You made a name for yourself, which remains to this day. 11 You divided the sea before them, so that they passed through it on dry ground, but you hurled their pursuers into the depths, like a stone into mighty waters. 12 By day you led them with a pillar of cloud, and by night with a pillar of fire to give them light on the way they were to take.

13 “You came down on Mount Sinai; you spoke to them from heaven. You gave them regulations and laws that are just and right, and decrees and commands that are good. 14 You made known to them your holy Sabbath and gave them commands, decrees and laws through your servant Moses. 15 In their hunger you gave them bread from heaven and in their thirst you brought them water from the rock; you told them to go in and take possession of the land you had sworn with uplifted hand to give them.

16 “But they, our ancestors, became arrogant and stiff-necked, and they did not obey your commands. 17 They refused to listen and failed to remember the miracles you performed among them. They became stiff-necked and in their rebellion appointed a leader in order to return to their slavery. But you are a forgiving God, gracious and compassionate, slow to anger and abounding in love. Therefore you did not desert them, 18 even when they cast for themselves an image of a calf and said, ‘This is your god, who brought you up out of Egypt,’ or when they committed awful blasphemies.

19 “Because of your great compassion you did not abandon them in the wilderness. By day the pillar of cloud did not fail to guide them on their path, nor the pillar of fire by night to shine on the way they were to take. 20 You gave your good Spirit to instruct them. You did not withhold your manna from their mouths, and you gave them water for their thirst. 21 For forty years you sustained them in the wilderness; they lacked nothing, their clothes did not wear out nor did their feet become swollen.
–
Footnotes:

Joseph Accepts Jesus as His Son
18 This is how the birth of Jesus the Messiah came about[d]: His mother Mary was pledged to be married to Joseph, but before they came together, she was found to be pregnant through the Holy Spirit. 19 Because Joseph her husband was faithful to the law, and yet[e] did not want to expose her to public disgrace, he had in mind to divorce her quietly.

20 But after he had considered this, an angel of the Lord appeared to him in a dream and said, “Joseph son of David, do not be afraid to take Mary home as your wife, because what is conceived in her is from the Holy Spirit. 21 She will give birth to a son, and you are to give him the name Jesus,[f] because he will save his people from their sins.”

22 All this took place to fulfill what the Lord had said through the prophet: 23 “The virgin will conceive and give birth to a son, and they will call him Immanuel”[g] (which means “God with us”).

24 When Joseph woke up, he did what the angel of the Lord had commanded him and took Mary home as his wife. 25 But he did not consummate their marriage until she gave birth to a son. And he gave him the name Jesus.
–
Footnotes: