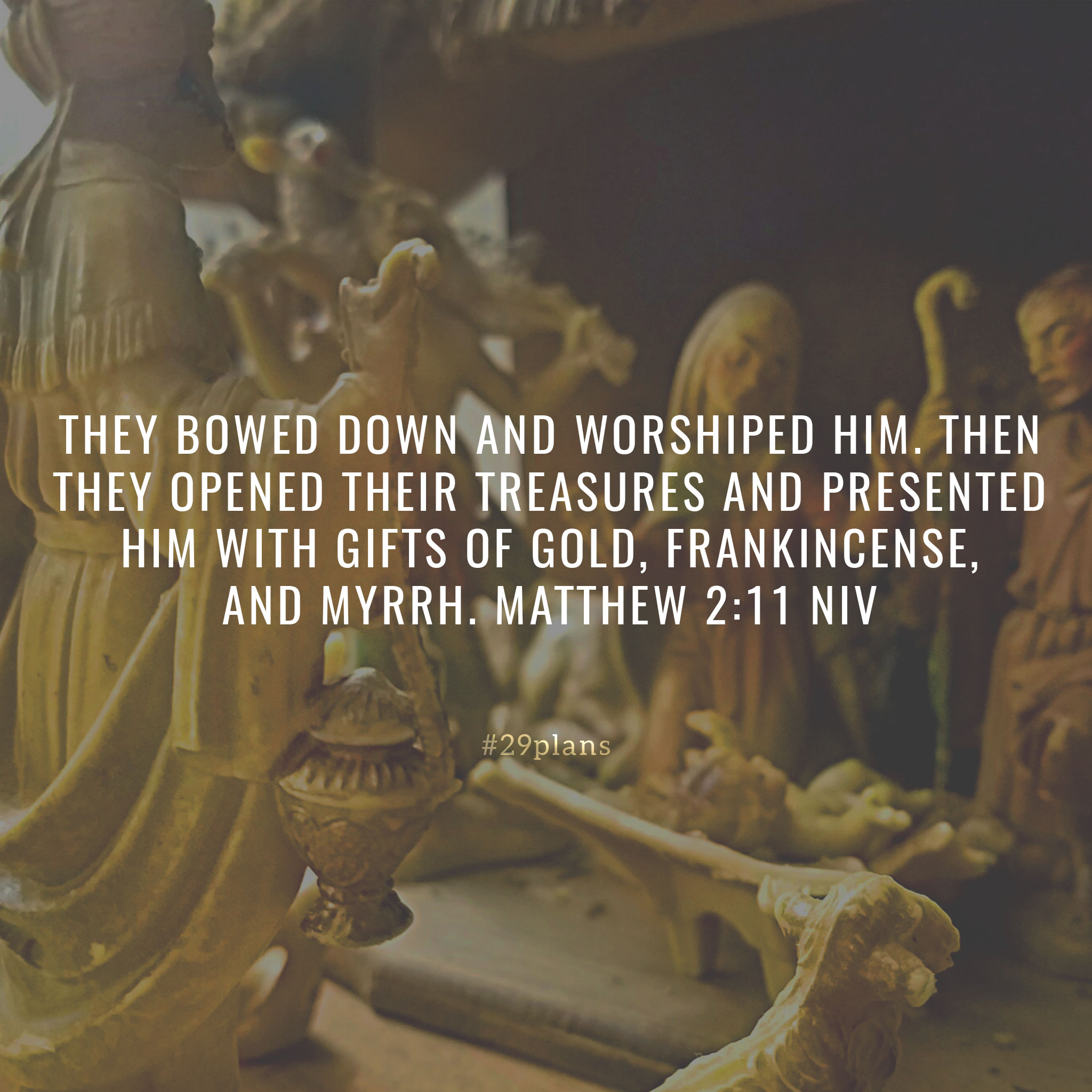 Guide: Read Malachi 1; Matthew 2:1-12; Listen to We Three Kings by @itsbrittnicole @tenthavenorth; Pray for three friends; Give a gift to a relief organization

Verse of the Day: They bowed down and worshiped him. Then they opened their treasures and presented him with gifts of gold, frankincense and myrrh. Matthew 2:11 NIV

Song of the Day: We Three Kings by Tenth Avenue North — Youtube

1 A prophecy: The word of the Lord to Israel through Malachi.[a]

Israel Doubts God’s Love
2 “I have loved you,” says the Lord.

“Was not Esau Jacob’s brother?” declares the Lord. “Yet I have loved Jacob, 3 but Esau I have hated, and I have turned his hill country into a wasteland and left his inheritance to the desert jackals.”

4 Edom may say, “Though we have been crushed, we will rebuild the ruins.”

But this is what the Lord Almighty says: “They may build, but I will demolish. They will be called the Wicked Land, a people always under the wrath of the Lord. 5 You will see it with your own eyes and say, ‘Great is the Lord—even beyond the borders of Israel!’

Breaking Covenant Through Blemished Sacrifices
6 “A son honors his father, and a slave his master. If I am a father, where is the honor due me? If I am a master, where is the respect due me?” says the Lord Almighty.

“It is you priests who show contempt for my name.

“But you ask, ‘How have we shown contempt for your name?’

7 “By offering defiled food on my altar.

“But you ask, ‘How have we defiled you?’

9 “Now plead with God to be gracious to us. With such offerings from your hands, will he accept you?”—says the Lord Almighty.

12 “But you profane it by saying, ‘The Lord’s table is defiled,’ and, ‘Its food is contemptible.’ 13 And you say, ‘What a burden!’ and you sniff at it contemptuously,” says the Lord Almighty.

“When you bring injured, lame or diseased animals and offer them as sacrifices, should I accept them from your hands?” says the Lord. 14 “Cursed is the cheat who has an acceptable male in his flock and vows to give it, but then sacrifices a blemished animal to the Lord. For I am a great king,” says the Lord Almighty, “and my name is to be feared among the nations.
–
Footnotes:

The Magi Visit the Messiah
1 After Jesus was born in Bethlehem in Judea, during the time of King Herod, Magi[a] from the east came to Jerusalem 2 and asked, “Where is the one who has been born king of the Jews? We saw his star when it rose and have come to worship him.”

3 When King Herod heard this he was disturbed, and all Jerusalem with him. 4 When he had called together all the people’s chief priests and teachers of the law, he asked them where the Messiah was to be born. 5 “In Bethlehem in Judea,” they replied, “for this is what the prophet has written:

6 “‘But you, Bethlehem, in the land of Judah,
are by no means least among the rulers of Judah;
for out of you will come a ruler
who will shepherd my people Israel.’[b]”
7 Then Herod called the Magi secretly and found out from them the exact time the star had appeared. 8 He sent them to Bethlehem and said, “Go and search carefully for the child. As soon as you find him, report to me, so that I too may go and worship him.”

9 After they had heard the king, they went on their way, and the star they had seen when it rose went ahead of them until it stopped over the place where the child was. 10 When they saw the star, they were overjoyed. 11 On coming to the house, they saw the child with his mother Mary, and they bowed down and worshiped him. Then they opened their treasures and presented him with gifts of gold, frankincense and myrrh. 12 And having been warned in a dream not to go back to Herod, they returned to their country by another route.
–
Footnotes: