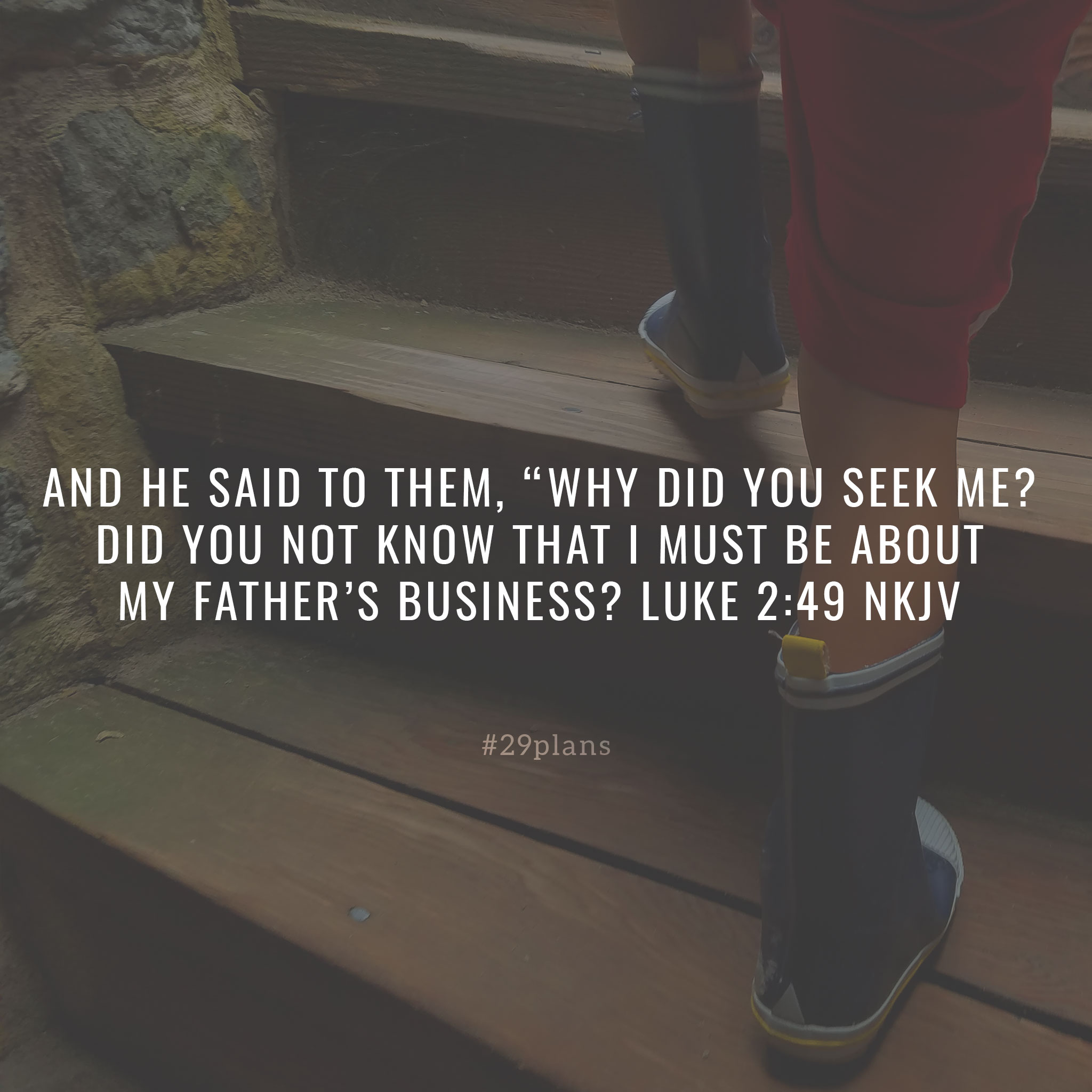 Guide: Read Malachi 4; Luke 2:41-52; Listen to About My Father’s Business by @MichealSCole; Pray for the new year; Journal on dreams for 2019

Verse of the Day: And He said to them, “Why did you seek Me? Did you not know that I must be about My Father’s business? Luke 2:49 NKJV

Song of the Day: About My Father’s Business by Michael Cole — Youtube

The Great Day of God
1 “For behold, the day is coming,
Burning like an oven,
And all the proud, yes, all who do wickedly will be stubble.
And the day which is coming shall burn them up,”
Says the Lord of hosts,
“That will leave them neither root nor branch.
2 But to you who fear My name
The Sun of Righteousness shall arise
With healing in His wings;
And you shall go out
And grow fat like stall-fed calves.
3 You shall trample the wicked,
For they shall be ashes under the soles of your feet
On the day that I do this,”
Says the Lord of hosts.
4 “Remember the Law of Moses, My servant,
Which I commanded him in Horeb for all Israel,
With the statutes and judgments.
5 Behold, I will send you Elijah the prophet
Before the coming of the great and dreadful day of the Lord.
6 And he will turn
The hearts of the fathers to the children,
And the hearts of the children to their fathers,
Lest I come and strike the earth with a curse.”

The Boy Jesus Amazes the Scholars
41 His parents went to Jerusalem every year at the Feast of the Passover. 42 And when He was twelve years old, they went up to Jerusalem according to the custom of the feast. 43 When they had finished the days, as they returned, the Boy Jesus lingered behind in Jerusalem. And Joseph and His mother[a] did not know it; 44 but supposing Him to have been in the company, they went a day’s journey, and sought Him among their relatives and acquaintances. 45 So when they did not find Him, they returned to Jerusalem, seeking Him. 46 Now so it was that after three days they found Him in the temple, sitting in the midst of the teachers, both listening to them and asking them questions. 47 And all who heard Him were astonished at His understanding and answers. 48 So when they saw Him, they were amazed; and His mother said to Him, “Son, why have You done this to us? Look, Your father and I have sought You anxiously.”

49 And He said to them, “Why did you seek Me? Did you not know that I must be about My Father’s business?” 50 But they did not understand the statement which He spoke to them.

Jesus Advances in Wisdom and Favor
51 Then He went down with them and came to Nazareth, and was subject to them, but His mother kept all these things in her heart. 52 And Jesus increased in wisdom and stature, and in favor with God and men.
–
Footnotes: