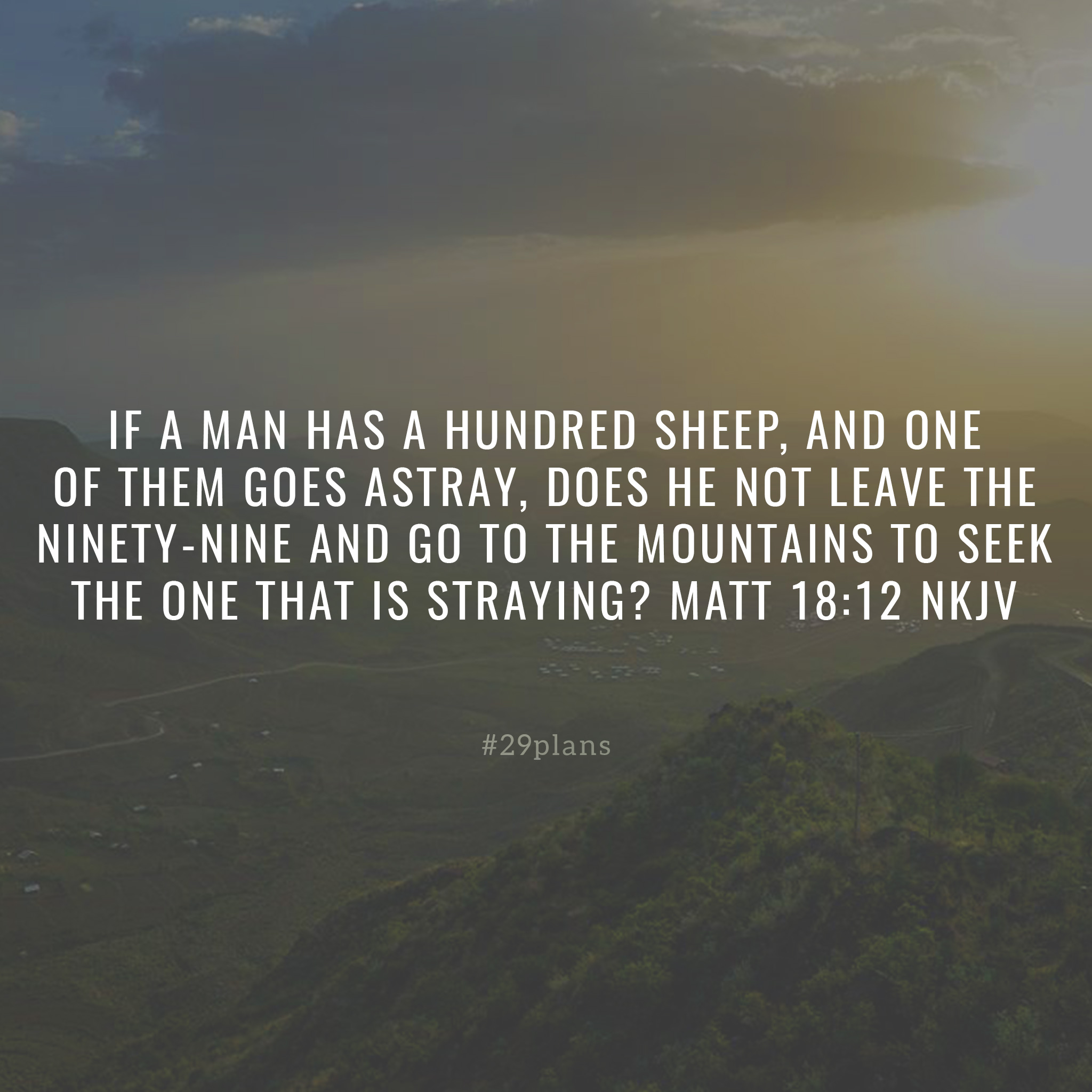 Guide: Read Genesis 23; Matthew 18:12-35; Listen to The Ninety Nine by @citipointelive; Pray for those straying from faith; Who can you reach out to?

Verse of the Day: If a man has a hundred sheep, and one of them goes astray, does he not leave the ninety-nine and go to the mountains to seek the one that is straying? Matt 18:12 NKJV

Song of the Day: The Ninety Nine by Citipointe Live — Youtube

1 Sarah lived one hundred and twenty-seven years; these were the years of the life of Sarah. 2 So Sarah died in Kirjath Arba (that is, Hebron) in the land of Canaan, and Abraham came to mourn for Sarah and to weep for her.

3 Then Abraham stood up from before his dead, and spoke to the sons of Heth, saying, 4 “I am a foreigner and a visitor among you. Give me property for a burial place among you, that I may bury my dead out of my sight.”

5 And the sons of Heth answered Abraham, saying to him, 6 “Hear us, my lord: You are a mighty prince among us; bury your dead in the choicest of our burial places. None of us will withhold from you his burial place, that you may bury your dead.”

7 Then Abraham stood up and bowed himself to the people of the land, the sons of Heth. 8 And he spoke with them, saying, “If it is your wish that I bury my dead out of my sight, hear me, and meet with Ephron the son of Zohar for me, 9 that he may give me the cave of Machpelah which he has, which is at the end of his field. Let him give it to me at the full price, as property for a burial place among you.”

14 And Ephron answered Abraham, saying to him, 15 “My lord, listen to me; the land is worth four hundred shekels of silver. What is that between you and me? So bury your dead.” 16 And Abraham listened to Ephron; and Abraham weighed out the silver for Ephron which he had named in the hearing of the sons of Heth, four hundred shekels of silver, currency of the merchants.

17 So the field of Ephron which was in Machpelah, which was before Mamre, the field and the cave which was in it, and all the trees that were in the field, which were within all the surrounding borders, were deeded 18 to Abraham as a possession in the presence of the sons of Heth, before all who went in at the gate of his city.

19 And after this, Abraham buried Sarah his wife in the cave of the field of Machpelah, before Mamre (that is, Hebron) in the land of Canaan. 20 So the field and the cave that is in it were deeded to Abraham by the sons of Heth as property for a burial place.

12 “What do you think? If a man has a hundred sheep, and one of them goes astray, does he not leave the ninety-nine and go to the mountains to seek the one that is straying? 13 And if he should find it, assuredly, I say to you, he rejoices more over that sheep than over the ninety-nine that did not go astray. 14 Even so it is not the will of your Father who is in heaven that one of these little ones should perish.

Dealing with a Sinning Brother

15 “Moreover if your brother sins against you, go and tell him his fault between you and him alone. If he hears you, you have gained your brother. 16 But if he will not hear, take with you one or two more, that ‘by the mouth of two or three witnesses every word may be established.’[a] 17 And if he refuses to hear them, tell it to the church. But if he refuses even to hear the church, let him be to you like a heathen and a tax collector.

19 “Again I say[b] to you that if two of you agree on earth concerning anything that they ask, it will be done for them by My Father in heaven. 20 For where two or three are gathered together in My name, I am there in the midst of them.”

The Parable of the Unforgiving Servant

21 Then Peter came to Him and said, “Lord, how often shall my brother sin against me, and I forgive him? Up to seven times?”

22 Jesus said to him, “I do not say to you, up to seven times, but up to seventy times seven. 23 Therefore the kingdom of heaven is like a certain king who wanted to settle accounts with his servants. 24 And when he had begun to settle accounts, one was brought to him who owed him ten thousand talents. 25 But as he was not able to pay, his master commanded that he be sold, with his wife and children and all that he had, and that payment be made. 26 The servant therefore fell down before him, saying, ‘Master, have patience with me, and I will pay you all.’ 27 Then the master of that servant was moved with compassion, released him, and forgave him the debt.

28 “But that servant went out and found one of his fellow servants who owed him a hundred denarii; and he laid hands on him and took him by the throat, saying, ‘Pay me what you owe!’ 29 So his fellow servant fell down at his feet[c] and begged him, saying, ‘Have patience with me, and I will pay you all.’[d] 30 And he would not, but went and threw him into prison till he should pay the debt. 31 So when his fellow servants saw what had been done, they were very grieved, and came and told their master all that had been done. 32 Then his master, after he had called him, said to him, ‘You wicked servant! I forgave you all that debt because you begged me. 33 Should you not also have had compassion on your fellow servant, just as I had pity on you?’ 34 And his master was angry, and delivered him to the torturers until he should pay all that was due to him.

35 “So My heavenly Father also will do to you if each of you, from his heart, does not forgive his brother his trespasses.”[e] –
Footnotes: