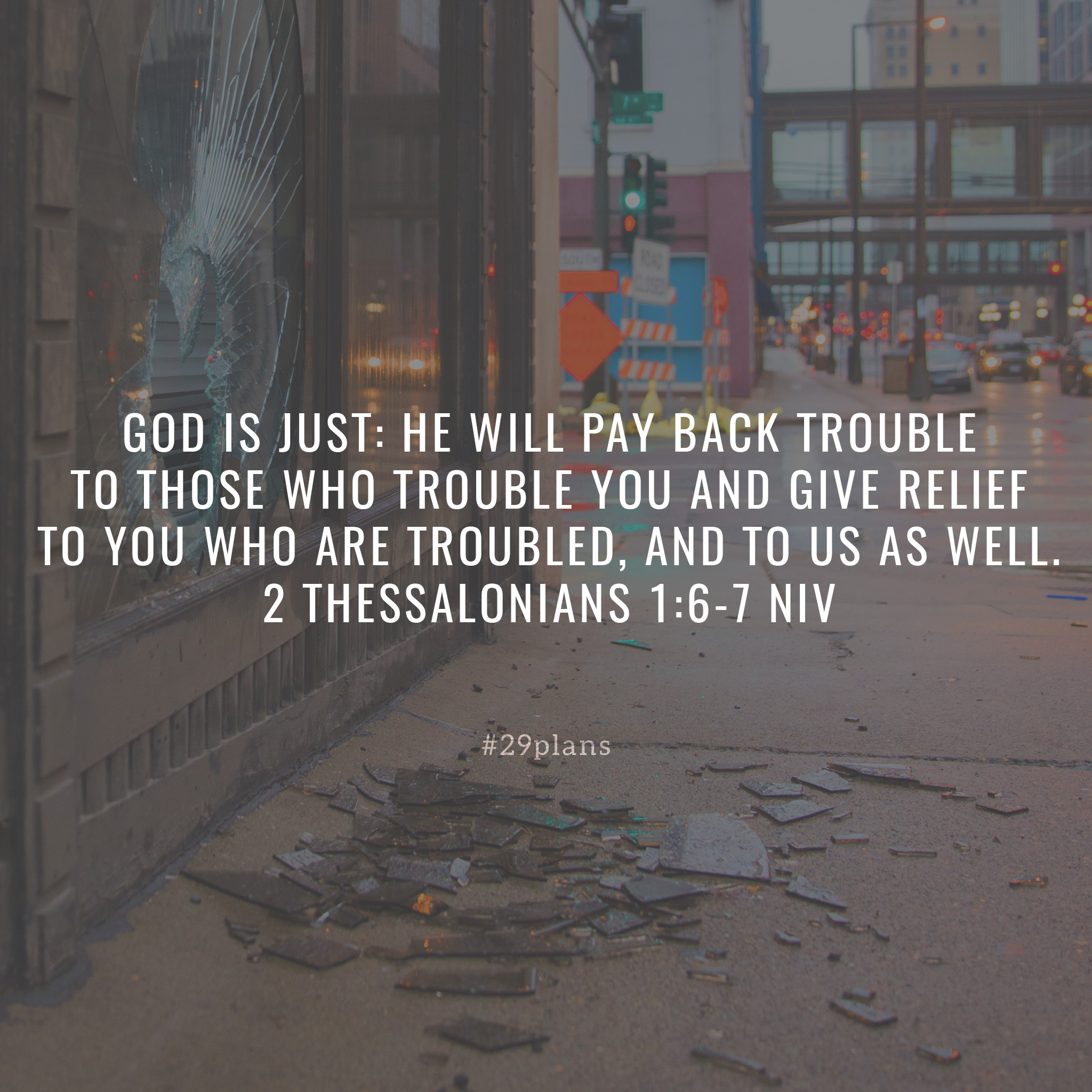 Verse of the Day: God is just: He will pay back trouble to those who trouble you and give relief to you who are troubled, and to us as well. 2 Thessalonians 1:6-7 NIV

Towns for the Levites

1 On the plains of Moab by the Jordan across from Jericho, the Lord said to Moses, 2 “Command the Israelites to give the Levites towns to live in from the inheritance the Israelites will possess. And give them pasturelands around the towns. 3 Then they will have towns to live in and pasturelands for the cattle they own and all their other animals.

9 Then the Lord said to Moses: 10 “Speak to the Israelites and say to them: ‘When you cross the Jordan into Canaan, 11 select some towns to be your cities of refuge, to which a person who has killed someone accidentally may flee. 12 They will be places of refuge from the avenger, so that anyone accused of murder may not die before they stand trial before the assembly. 13 These six towns you give will be your cities of refuge. 14 Give three on this side of the Jordan and three in Canaan as cities of refuge. 15 These six towns will be a place of refuge for Israelites and for foreigners residing among them, so that anyone who has killed another accidentally can flee there.

22 “‘But if without enmity someone suddenly pushes another or throws something at them unintentionally 23 or, without seeing them, drops on them a stone heavy enough to kill them, and they die, then since that other person was not an enemy and no harm was intended, 24 the assembly must judge between the accused and the avenger of blood according to these regulations. 25 The assembly must protect the one accused of murder from the avenger of blood and send the accused back to the city of refuge to which they fled. The accused must stay there until the death of the high priest, who was anointed with the holy oil.

26 “‘But if the accused ever goes outside the limits of the city of refuge to which they fled 27 and the avenger of blood finds them outside the city, the avenger of blood may kill the accused without being guilty of murder. 28 The accused must stay in the city of refuge until the death of the high priest; only after the death of the high priest may they return to their own property.

29 “‘This is to have the force of law for you throughout the generations to come, wherever you live.

31 “‘Do not accept a ransom for the life of a murderer, who deserves to die. They are to be put to death.

32 “‘Do not accept a ransom for anyone who has fled to a city of refuge and so allow them to go back and live on their own land before the death of the high priest.

33 “‘Do not pollute the land where you are. Bloodshed pollutes the land, and atonement cannot be made for the land on which blood has been shed, except by the blood of the one who shed it. 34 Do not defile the land where you live and where I dwell, for I, the Lord, dwell among the Israelites.’”
–
Footnotes:

To the church of the Thessalonians in God our Father and the Lord Jesus Christ:

2 Grace and peace to you from God the Father and the Lord Jesus Christ.

3 We ought always to thank God for you, brothers and sisters,[b] and rightly so, because your faith is growing more and more, and the love all of you have for one another is increasing. 4 Therefore, among God’s churches we boast about your perseverance and faith in all the persecutions and trials you are enduring.

5 All this is evidence that God’s judgment is right, and as a result you will be counted worthy of the kingdom of God, for which you are suffering. 6 God is just: He will pay back trouble to those who trouble you 7 and give relief to you who are troubled, and to us as well. This will happen when the Lord Jesus is revealed from heaven in blazing fire with his powerful angels. 8 He will punish those who do not know God and do not obey the gospel of our Lord Jesus. 9 They will be punished with everlasting destruction and shut out from the presence of the Lord and from the glory of his might 10 on the day he comes to be glorified in his holy people and to be marveled at among all those who have believed. This includes you, because you believed our testimony to you.

11 With this in mind, we constantly pray for you, that our God may make you worthy of his calling, and that by his power he may bring to fruition your every desire for goodness and your every deed prompted by faith. 12 We pray this so that the name of our Lord Jesus may be glorified in you, and you in him, according to the grace of our God and the Lord Jesus Christ.[c] –
Footnotes: